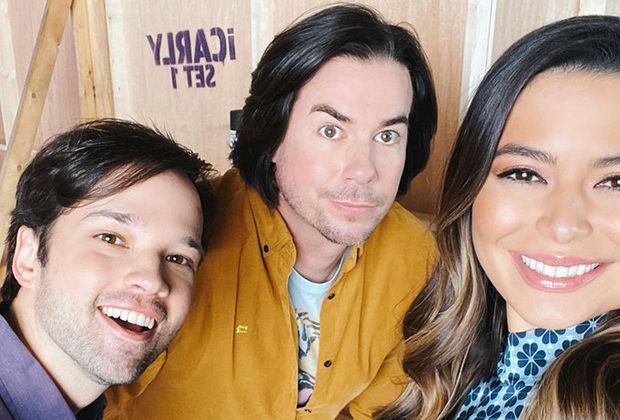 Carly, Freddie and Spencer are together again. Paramount+ on Thursday shared the first photo of Miranda Cosgrove, Nathan Kress and Jerry Trainor hard at work on the streamer’s upcoming iCarly revival.

The behind-the-scenes photo, which Paramount+ plastered on social media, was accompanied by a snippet of the original series’ theme song: “So wake-up the members of my nation! Who’s ready for the all new #iCarly series on Paramount+?” (OK, that last part was definitely added in.)

All three actors pictured were confirmed to return for the project when TVLine first reported its development in December. It’s not yet known whether we’ll see other fan favorites, including Sam (played by Jennette McCurdy) and Gibby (Noah Munck).

Jay Kogen (School of Rock, The Simpsons, Frasier) and Ali Schouten (Diary of a Future President, Champions, Merry Happy Whatever) have signed on to develop the update.

The original iCarly series, which was created by Dan Schneider and aired on Nickelodeon from 2007-2012, followed a group of best friends creating a webcast while grappling with everyday problems and adventures. Check out the Season 1 intro below so you can really appreciate how things have changed:

Are you looking forward to catching up with the iCarly gang? Drop a comment with your thoughts below.

Back to Top
Close Add post
X
Armie Hammer Exits Making of ‘The Godfather’ Drama Series at Paramount Plus (EXCLUSIVE)…EntertainmentArmie Hammer will no longer star in the upcoming Paramount Plus series “The Offer,” which tells the behind the scenes story of the making of “The Godf…

X
New ‘WandaVision’ Trailer Teases a Game-Changing Episode 4: ‘N…EntertainmentIt’s about to go down on WandaVision. A new trailer for the Disney+ series’ fourth installment, debuting Friday, Jan. 29, alludes to a real game-chang…
close