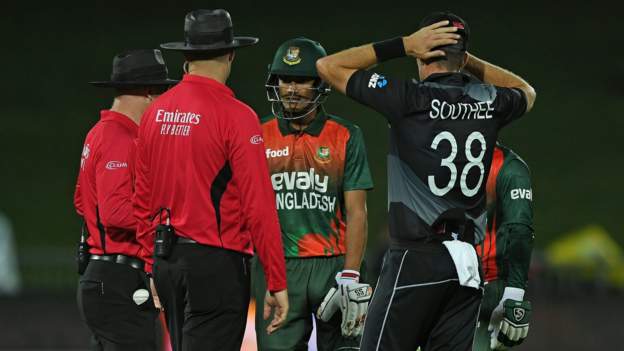 The second T20I match between Bangladesh and New Zealand was nothing short of bizarre as the Duckworth and lewis (DLS) rule once again left everyone scratching their heads. Bangladesh in the tour of New Zealand so far has been on the losing side in every match and the trend continued after they failed to chase down their revised DLS target in the second T20I at Napier. In a first, a team was unaware of their target during the run chase after the rain had interrupted the match when New Zealand batted in the first half.

During the 18th over of the New Zealand batting display, the rain came when they were on course to set a target of more than 200 runs for Bangladesh. Unfortunately, the rain gods interfered and they couldn’t bat their remaining 2.1 overs which meant that Bangladesh was chasing a revised DLS target. But surprisingly when Bangladesh came out to chase they were not told about their target which probably has never happened on the cricket field before.

In the second over, the Bangladesh batsmen did not know the target where they were heading. The umpires then stopped play, and the numbers were worked out after they finally communicated with each other. It was ultimately decided that Bangladesh would be chasing a target of 170 for victory in 16 overs. Then later in the run chase, the umpires bamboozled everyone again when they for the second time revised the Bangladesh target again.

In the 15th over the umpires told the batsmen that they were chasing a target of 171 instead of 170 in 16 overs. Nevertheless, the runs proved to be just too much for Bangladesh as they could only manage to score 142/7 in their allotted 16 overs and the hosts won the match comprehensively by 28 runs. New Zealand has now won the T20I series and Bangladesh will be playing to avoid a whitewash in the final T20I on Thursday.