Home General In a Village of Widows, the Opium Trade Has Taken a Deadly Toll

In a Village of Widows, the Opium Trade Has Taken a Deadly Toll 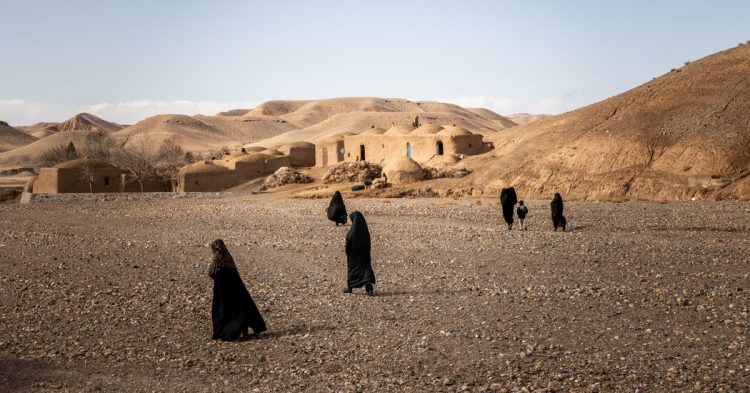 MIR ALI, Afghanistan — On the barren high plains of western Afghanistan, along a roadway south of Herat city, is a collection of sturdy earthen huts known as Qala-e-Biwaha, or “village of widows.”

Most of the village’s men have disappeared — killed while trying to smuggle opium across the desolate frontier into neighboring Iran. The widows have been left to fend for themselves and their children, some of whom have also died while transporting drugs over the border from Herat Province’s rugged Adraskan district.

The area is so destitute that men seeking work here have two choices, said Mohammad Ali Faqiryar, the district governor: “They can smuggle drugs or join the Taliban.”

Those who agree to smuggle opium, heroin and methamphetamines into Iran can earn $300 or more per trip, a fortune for such a poor village. But they risk arrest, prosecution and execution in Iran’s Islamic courts — or being shot and killed by Iranian border guards.

As of 2018, Afghanistan was the world’s largest producer of opium, and poppy is the country’s most lucrative cash crop. The profits fuel the Taliban’s financial networks and for years have undermined sustainable reconstruction and security efforts by the United States and its allies.

Afghan officials seem powerless to stop the lucrative trade; many have grown wealthy through their complicity in facilitating the trafficking. What results is an enduring cycle of opium cultivation, processing and trafficking that often leaves Afghanistan’s most vulnerable to bear the dire consequences of the illicit trade.

Mr. Faqiryar said he has tried and failed to get government money for programs to help people raise livestock and grow wheat, rice and beans in the arid, unforgiving landscape.

“We get no help from the central government — they don’t care about the people, even if they’re starving,” he said.

The widows survive on food bought with their earnings from the wool-processing trade, and on donations from relatives and international aid groups. Some children attend a madrasa, or Islamic school, run by a mullah at a tiny mosque in a nearby settlement. The nearest population center is Herat city, the provincial capital, 45 miles north.

“For a long time, life was very good and my three sons earned a lot of money carrying opium,” said Nek Bibi, a widow who said she was about 50 years old. She spoke outside her dwelling, fashioned from dried packed earth, as a grandchild clung to her robes. “Then they were all killed.”

Her oldest son, Ghulam Rasul, 20, was arrested several years ago and later hanged in Iran after he was convicted of smuggling opium, she said. Three years ago, she said, two more sons — Abdul Ghafoor, 15, and Abdel Zarif, 14 — were shot dead by Iranian border guards as they tried to transport opium from Afghanistan.

Ms. Bibi said Iran never returned her sons’ bodies, a complaint shared by other women in the village. “I don’t know if they were buried in Iran or their bodies were just thrown in the desert,” she said.

Her husband, Mohammad Sadeq, recently died of illness, Ms. Bibi said, leaving her to care for her sons’ widows and her eight grandchildren. She earns a meager living processing raw wool by hand into fibers for carpet weaving.

These days, the village is whipped by frigid winds that drown out the bleating of sheep in rough pens next to the widows’ huts, which seem to rise up from the dun-colored soil to mimic the shape and texture of the surrounding hills. There is no electricity or running water, and no heat except from the dry brush that families buy or collect to burn. Some widows, like Ms. Bibi, light a single bulb at night with power generated during the day by tiny solar panels.

Conditions were so severe this fall that many women fled the village for the homes of relatives or for displaced-person camps run by aid organizations. Until recently, the village was home to 80 widows and their families, said Mohammad Zaman Shakib, the district council’s development director. Today, there are just 30.

“The cold and the hunger drove them away,” Mr. Shakib said.

As he spoke, several widows and their children squatted beside their huts, warming themselves in the brittle winter sunshine that emerged after a morning of snow squalls. Most of the women wore long black robes that concealed all but their eyes. Some spoke of leaving the village.

“There’s nothing for us here — we could starve this winter,” said Fatima, who goes by one name and said she was about 40 years old.

Fatima said her husband, Fazel Haq, had struggled to earn a living collecting and selling brush for cooking and heating. Desperate, he accepted an offer to smuggle opium for $200 per trip, she said.

He trafficked drugs for three years until, five years ago, he was shot and killed by Iranian border guards, Fatima said. Now she cares for the couple’s five sons.

The paucity of men in the village has not liberated the women from the harsh confines of Afghanistan’s patriarchal culture. The area around Qala-e-Biwaha is home to several white-bearded men, who interrupted some of the widows and talked over others as they spoke about their hardships.

Herat is one of three western provinces that provide a regular export conduit for drugs, Afghan officials say, with Iran a primary destination for Afghanistan’s opium.

Mr. Faqiryar, the governor, said the village emerged as the area’s center of drug trafficking after a local man started an opium smuggling operation there three decades ago. The same man now commands a pro-government militia in Herat, he said.

Drug smuggling in the area is so pervasive that Iran deploys vehicle patrols along the open border with Adraskan district, the governor said. Yet traffickers, known as quchaqbar, are able to transport enough opium — much of it from Helmand and Farah Provinces — into Iran to absorb the loss of drug shipments intercepted along the roughly 135-mile border the province shares with Iran.

As recently as 2016, Iran executed hundreds of people a year, most of them for drug offenses, Amnesty International reported. The pace of drug crime executions has slowed since a 2017 amendment to Iran’s drug law raised the threshold for the death penalty.

For the widows’ village and other settlements in Herat Province, the war is never far away. The Taliban regularly attack government outposts nearby. Every day, police patrols clear the highway to Herat city of roadside bombs planted by militants at night, Mr. Faqiryar said.

Recently, he said, a small border outpost was shut down by the government after it was attacked and damaged — not by the Taliban, but by drug traffickers aligned with the militants to clear the way for trafficking.

So the widows endure, most of them earning a pittance in the wool-processing trade, which leaves their hands calloused and discolored. As they struggle to raise their children, many fear their sons will follow their dead fathers into the drug trafficking business.

“I won’t let them — they’ll be killed just like their father,” Fatima said of her five sons. “I would forbid it, even if it meant we starved to death.”