In Jammu, DDC polls bring hope, a sense of belonging 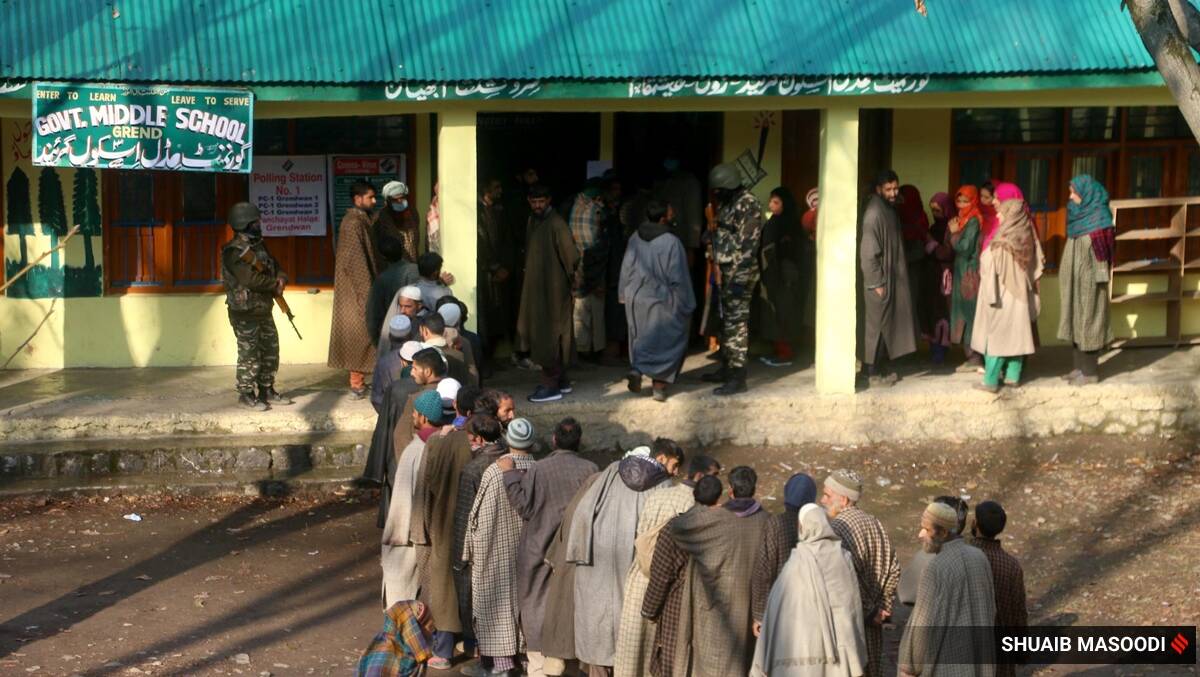 
A security personnel keeps vigil at a polling station in Pahalgam as voters stand in queue to cast their votes for the District Development Council elections. (Express photo: Shuaib Masoodi)

The link road connecting the Kotgarhi panchayat in Jammu district’s Akhnoor tehsil to the main Akhnoor-Jourian road is in a dilapidated condition. However, Pritam Lal, a refugee from West Pakistan, has still travelled to cast his vote and elect his representative for Jammu and Kashmir’s first District Development Councils (DDC).

“I have come to cast my vote as it makes me feel that I too matter in Jammu and Kashmir,” he said, adding that though his family has been living in Jammu for 73 years, they had no right to the land. “At least now my four children, all of whom are post-graduates but are still unemployed, can now apply for a government job in the Union Territory,” he said.

Lal was accompanied by his nephew, Mangat Ram, a Seema Suraksha Bal (SSB) personnel. The 31-year-old had left his marriage ceremony halfway to cast his vote. “My ancestors had been craving for this privilege and now, when I have got this opportunity, I must cast my vote,” Ram said.

Like Lal and Ram, many refugees from West Pakistan along with Gorkhas and Valmikis living in two DDC constituencies in Jammu district — Maira Mandrian and Bhalwal Brahmana — were casting their votes in the local body polls for the first time.

Prior to abrogation of Article 370 on August 5, 2019, these people, though living here for generations, were only allowed to cast their vote in the Lok Sabha elections.

In Sohal panchayat, Kaku Ram brought his 100-year-old mother Ambo Devi to vote. His village Kangral (Nud) has no pucca road and the much-promised toilet scheme has not been implemented. He, however, hoped that the DDC elections would give elected local body members the authority to initiate development works.

“Today is a historic day as Hindu-Sikh refugees from Pakistan, along with Valmikis and Gorkhas, are exercising their right to vote for the first time in 73 years,” said Hari Om, a retired Jammu University professor.

TN polls: Modi lashes out at DMK-Cong in Madurai