Home News In mega outreach amid protests, PM Modi to interact with farmers from 6 states on December 25

In mega outreach amid protests, PM Modi to interact with farmers from 6 states on December 25 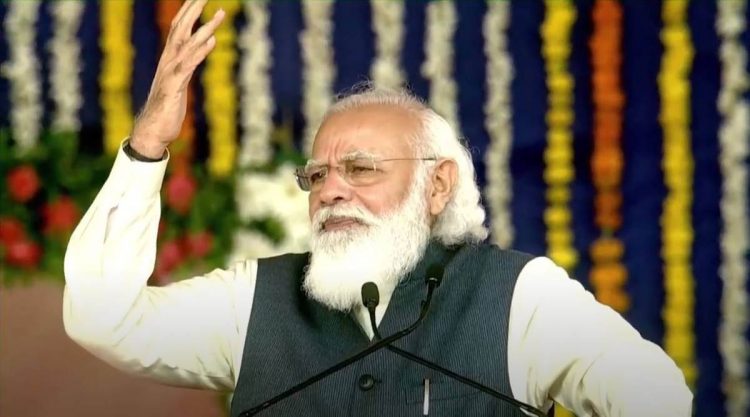 PM Modi will digitally deposit a total of Rs 18,000 crore in the bank accounts of nine crore farmers (File)

As the Centre remains locked in a standoff with farmers, whose protest against the new farm laws is now in its fourth week, Prime Minister Narendra Modi, in a mega outreach, will interact with farmers from six states on Friday. On the occassion, PM Modi will digitally deposit a total of Rs 18,000 crore in the bank accounts of nine crore farmers under the Pradhan Mantri Kisan Samman Nidhi scheme.

“The farmers will share their experiences with PM-KISAN and also on various other initiatives taken by the government for the welfare of farmers,” the PMO said in a statement. Union Agriculture Minister Narendra Singh Tomar will also be present on the occasion.

Under the PM-KISAN scheme, Rs 6,000 per year is provided to small and marginal farmers, payable in three equal instalments of Rs 2,000 each. The fund is transferred directly to the bank accounts of the beneficiaries.

The fresh outreach by PM Modi comes days after he said the MSP system would continue, and his government was ready to discuss any concern that farmers may have. Addressing a Kisan Sammelan in Raisen district of Madhya Pradesh, PM Modi listed what he called were the three “big lies” being spread by the Opposition about the farm laws — that MSP would be stopped, mandis would be shut down, and the new reforms would only safeguard contract farming.

“There is no reason for mistrust in the recent agricultural reforms done by the government, and there is no place for lies,” he had said.

Meanwhile, several farmers marked ‘Kisan Diwas’, the birth anniversary of former prime minister Chaudhary Charan Singh, by paying their tributes at Kisan Ghat while those protesting at Ghazipur border held a “havan”. Farmer unions also urged people to skip a meal on ‘Kisan Diwas’ in support of the ongoing protests.

So far, there has not been any headway after five rounds of talks between the government and farmer unions, who have maintained that their demand for repeal of the three farm laws was “non-negotiable”. On Tuesday, Tomar urged the farmers to decide on a date for talks two days after his Ministry invited farm unions for more discussion.

On the other hand, the government has stuck to its stand of not repealing the new farm laws and said it was open to any suggestions that would help break the deadlock with the protesting farmers, including tweaking the laws or even setting up a committee as suggested by the Supreme Court.

The farmers have expressed apprehension that these laws would pave the way for the dismantling of the minimum support price system, leaving them at the “mercy” of big corporations.