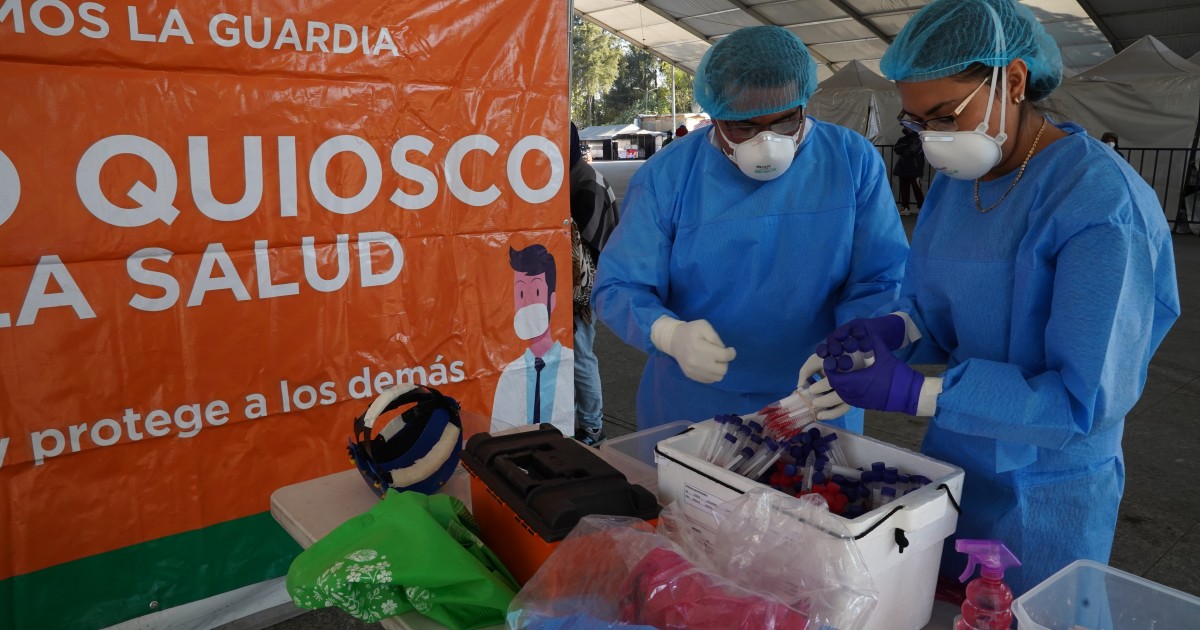 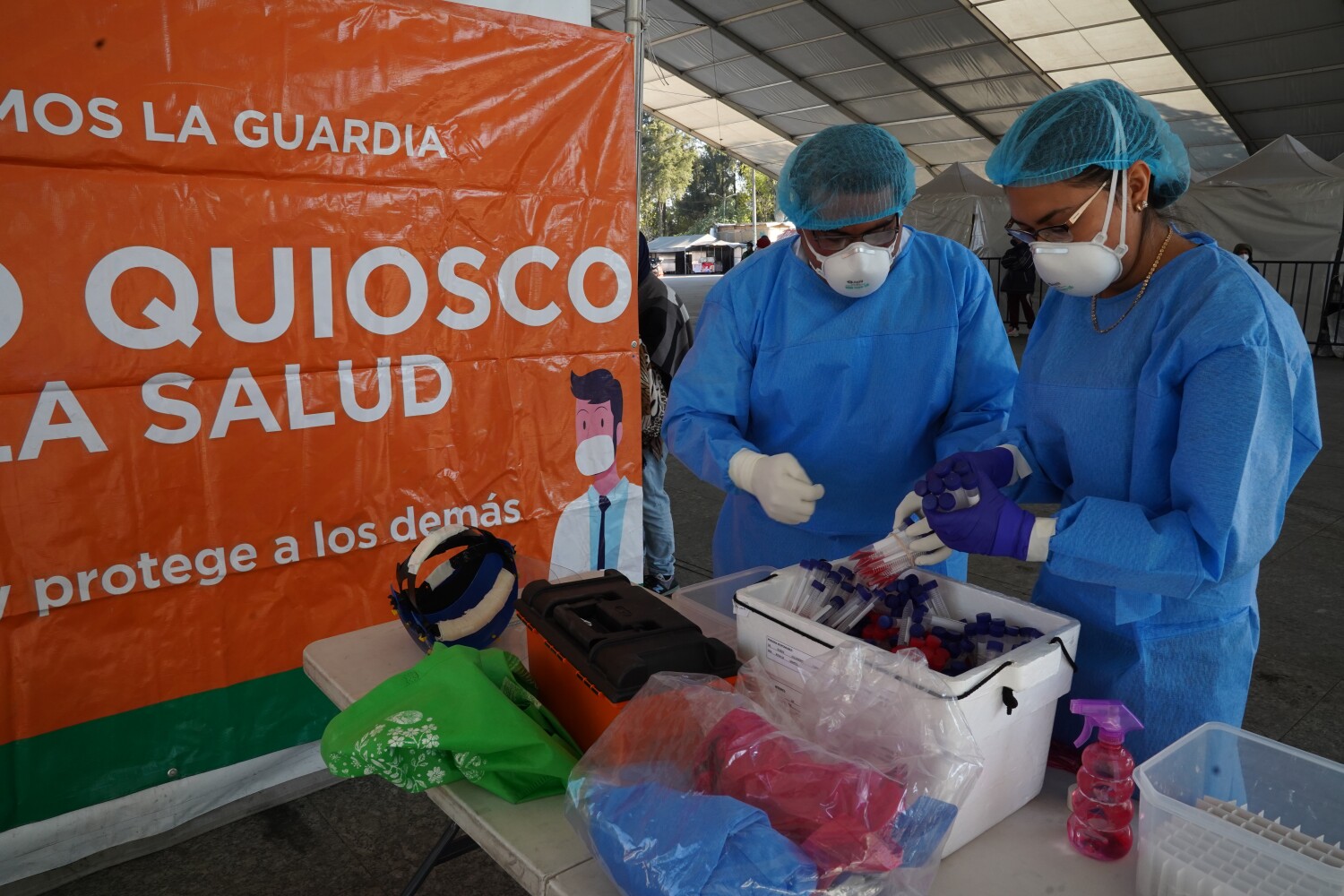 The vaccine pipeline is clogged, hospitals are overflowing, oxygen tanks for the ill are scarce — and the toll of dead and infected keeps spiking.

Meanwhile, restaurant workers and others have taken to the streets protesting shutdowns as Mexico’s coronavirus-ravaged economy continues to crater absent any significant stimulus package from the government.

“It feels like a horror film that never ends,” said Evelyn Beltrán, 39, a nurse in the city of Puebla. “What an awful sense of hopelessness and desperation.”

That’s the bleak pandemic panorama facing Mexico almost one year after the first infected person was diagnosed here. At the time, officials vowed that the country was prepared for the worst, despite its tattered healthcare infrastructure and high proportion of vulnerable citizens with diabetes, obesity, hypertension and other ailments.

Following traditional holiday family gatherings, January was the most lethal month to date, with almost 33,000 reported COVID-19 deaths, or more than 1,000 a day, according to official figures — which, authorities concede, represent a substantial undercount because of a severe lack of virus testing.

Mexico, with 165,786 official COVID-19-related deaths as of Sunday, has moved into third place on the global fatality rankings after the United States and Brazil, according to Johns Hopkins University data, surpassing India, a country with more than 10 times Mexico’s population.

Life in Mexico City, national epicenter of the virus, sputters along at a kind of frantic half-pace, subways and buses packed with mask-wearing patrons, highways jammed at rush hour, but offices largely vacant, schools mostly empty and shops and cafes generally operating on reduced hours. Street vendors, vanguard of the country’s massive informal economy, struggle to make a living. A sense of gloom and weariness — mingled with a pervasive fear of getting sick — prevails, alongside profound disquiet about what the future holds.

“My savings are used up, and there is no one who can lend us a hand,” said Gilberto Sánchez, 44, a father of two and restaurant chef in the San Angel district of southern Mexico City who has seen his weekly paycheck slashed by more than half.

He is among the lucky ones: He still has a job.

Almost 700,000 full-time jobs have been lost since last year, according to the country’s social security institute.

Official billboards in the hard-hit Iztapalapa district urging residents to “embrace the challenge” of fighting the virus seem like cruel parodies in the devastated, densely populated community. Entire families wait in line for hours in the central plaza for free coronavirus tests, only to be told that results won’t be available for two weeks or more.

Mexico’s distribution of the first batches of the Pfizer-BioNTech vaccine just before Christmas appeared to lift beleaguered national spirits. Authorities had secured from international manufacturers sufficient doses for everyone, declared President Andrés Manuel López Obrador. No one would have to pay.

The vaccine rollout seemed a policy and public relations coup for the president, who has maintained high popularity ratings despite fierce criticism of his handling of the emergency from health professionals, economists and others. He is seldom seen with a mask, has resisted imposing national lockdowns, and was slow to endorse social distancing and stay-at-home mandates.

But the initial euphoria about the vaccine’s arrival soon faded. Mexico had anticipated receiving some 400,000 doses a week through March, but Pfizer cut back, citing rising global demands. The country’s vaccine effort now appears on tenuous ground.

As of Saturday the country had administered about 711,000 doses — in a country of 126 million — and supplies are running low. Priority goes to the country’s more than 700,000 health workers, who have been ravaged, suffering almost 200,000 infections and at least 2,850 deaths — in part, many doctors and nurses say, because of the government’s failure to provide adequate protective gear. Health professionals who were first in line for Pfizer doses now fear there will be none left for the required second jabs. The country’s policy was to front-load vaccine distribution, not anticipating a shortfall.

“You finally see a small light at the end of the tunnel, believing that we would all get the vaccine, then it turns out it may not be available,” said Beltrán, 39, the nurse, who received an initial Pfizer shot on Jan. 21. “How is it possible that this could happen?”

Now, Mexico is looking to Russia, China and other sources. Last week, Mexico said it had contracted with Moscow for 400,000 shots of the Russian Sputnik V vaccine, to arrive later this month.

By most accounts, a much-hyped computer reservation system for vaccinations has been a debacle. High demand and sundry glitches have triggered multiple crashes. At any rate, the whole process is somewhat notional: Even if they secure appointments, people have no guarantee that vaccines will be available on their prescribed days.

“This government failed in the control of the pandemic, failed in medical care, and now I’m sure it is going to fail in its vaccination plan,” said Carlos Valencia, 36, an engineer in Mexico City who said he spent several days trying to arrange a vaccine date for his elderly parents without success. “As always, it is we citizens ourselves who will have to scrape with our fingernails to resolve our health and economic problems.”

Almost daily, harrowing stories appear in the news and on social media documenting the struggles of Mexicans trying to find hospital beds or oxygen for stricken loved ones. Health authorities are investigating the case of a 48-year-old man who died outside a public hospital last week, his family said, after he was barred admittance. A widely circulated video purported to show the man succumbing at the glass doors at the emergency room entrance as his distraught family pleaded for help. Relatives said they had tried, without success, to admit him into five different hospitals.

For Francisco Salazar, 73, the symptoms began last month as a headache and labored breathing, recalled his daughter, Lorena Salazar, 42. His family took him to a pharmacy with a doctor on site. His oxygen levels were dangerously low, the doctor warned. Salazar needed to be hospitalized immediately.

“That’s when our Via Crucis began,” said the daughter, referring metaphorically to the Stations of the Cross, Christ’s journey on the day of his crucifixion.

The family took Salazar to three different hospitals, she said, but none had space. They decided to bring him back home and give him oxygen. But none was available at supply outlets, now swamped with demand from COVID-19 victims. A pernicious black market has filled the void. Someone offered a tank for the equivalent of more than $3,000 — over 10 times the pre-pandemic price. The family couldn’t raise the cash.

“My father was getting worse — his lips were turning blue,” the daughter recalled.

The family finally found a slot at a public hospital. But they had to wait in line with other desperate people and fill out paperwork.

“The next day,” the daughter said, “the hospital informed us that our father had died.”

The death certificate lists COVID-19 as the “probable” cause of his demise, on Jan. 23.

“I feel anger, rage, sadness, guilt — I feel terrible for not having been able to do more for my father,” said Lorena Salazar, sobbing. “I wonder if it would have been different if we hadn’t lost so much time looking for a hospital, or trying to find oxygen. But we will never know. I just hope my father understands and forgives us.”

President López Obrador, himself infected, announced last week that his latest test results had come back negative and that his symptoms were mild. He was expected to be back in the public eye in coming days after two weeks of isolation.

“We have to keep moving forward confronting these two crises — the health [crisis], the pandemic — and the economic crisis,” the president said in a characteristically upbeat video address from the National Palace. “We will be fine. … I have faith in the future.”

Sánchez is a special correspondent.