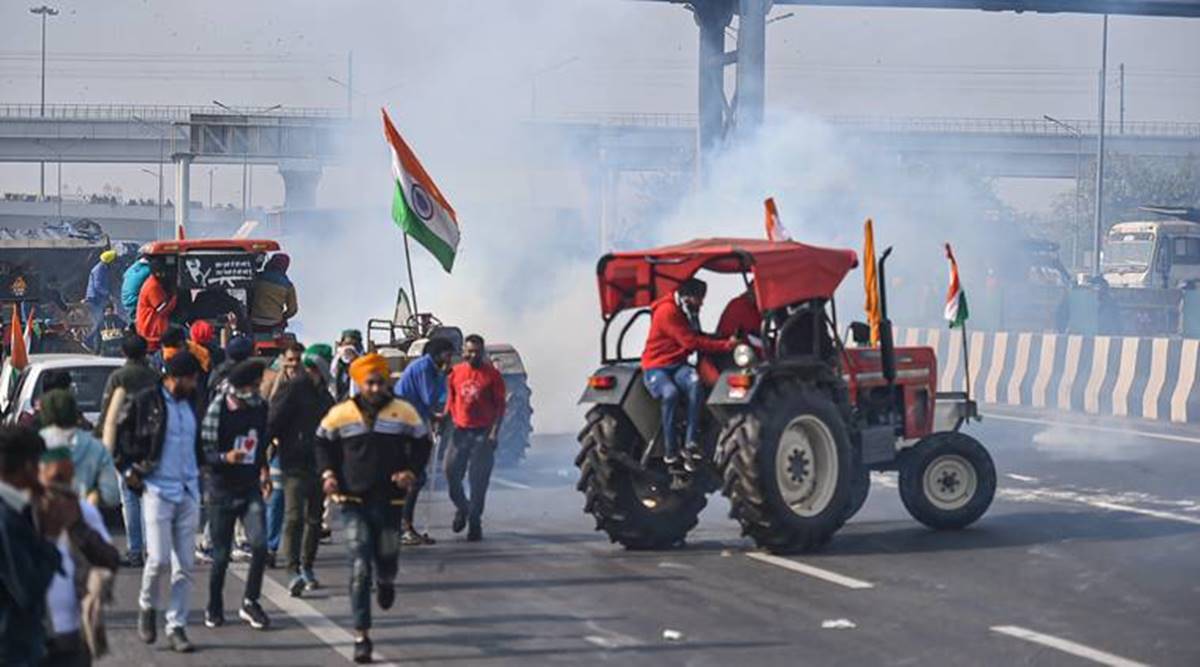 A day after the Republic Day violence in Delhi, farmers in Punjab said that the events had hurt their two-month struggle, adding that there should be a probe to identify those behind the events that unfolded at the Red Fort on January 26.

“We got to know that one of the organisations, which was not the part of the 31 organisations, had started its march from Singhu border early at 7:30 am and then they created ruckus near ITO road and then broke barricades on the non-permitted routes even as police punctured the tyres of their tractors. Still they went ahead and took the route towards Red Fort,” said a farmer, Paramjit Singh, from Kapurthala, adding: “I do not appreciate that they took the route which was not allowed. They should have stopped there only where they were stopped by police and should have brought the matter to the notice of farm leaders before taking different route of their own.”

Paramjit said: “We are deeply hurt as our entire support seems to have gone by this act and the farmers of Punjab have been shown in poor light.”

“Our purpose was to hold a successful and peaceful parade as we were appreciated for our protest in the entire world and the same appreciation was needed for this Republic Day parade. But now the detractors have got a chance of targeting all the farmers while only some of them were involved in such unlawful activities,” said another farmer Satnam Singh from Jhandusinga village.

He added that proper investigation should be done into the role of the miscreants who entered farmers’ protests and created ruckus.

“Government has already been trying to weaken this protest by calling it a move backed by Khalistanis, Naxals, Pakistani-China and now they will get an opportunity to criticise it but still we are hopeful that farm leaders will control this and resort to continue their peaceful protest,” said another farmer Raghubir Singh from Mukerian, adding that they should have paraded in front of Lal Kila rather than hoisting a flag other than the Tricolour.

An expert from Punjab Agriculture University (PAU), Ludhiana on the condition of anonymity said: “Farmer leaders under Sanyukt Kisan Morcha had adopted all the measures to keep the parade peaceful and had issued three types of instructions to be followed. They had even issued a warning against indulging in unlawful activities or face the music. But to control such a huge crowd when the government was not listening to them for the past two months was a huge task.” He added that farmer leaders should have acted firmly when some of the youth were not ready to follow the instructions of the leaders on Monday night.

“We are hopeful that Kisan Morcha will continue peacefully now,” he said.

CPI (ML) Liberation State Secretary Comrade Gurmeet Singh Bakhatpur said that some young farmers could not asses the “conspiracy of the Centre which wanted farmers to reach Lal Kila”. He said that due to the acts of some such groups, the entire farming community protesting peacefully at Delhi cannot be blamed.

He said that despite huge rush of farmers the farmers have not resorted to any violence inside Delhi except their tussle with police officials at ITO and Red Fort, but that too was not acceptable.

In Punjab, farmers rue loss of face due to Red For ruckus

X
DNA special: Here’s how rampaging mob unleashed violence at Red Fort…IndiaA day after thousands of farmers vandalised Red Fort in the name of protests and hoisted the flag of a particular religion from the ramparts of the hi…
close