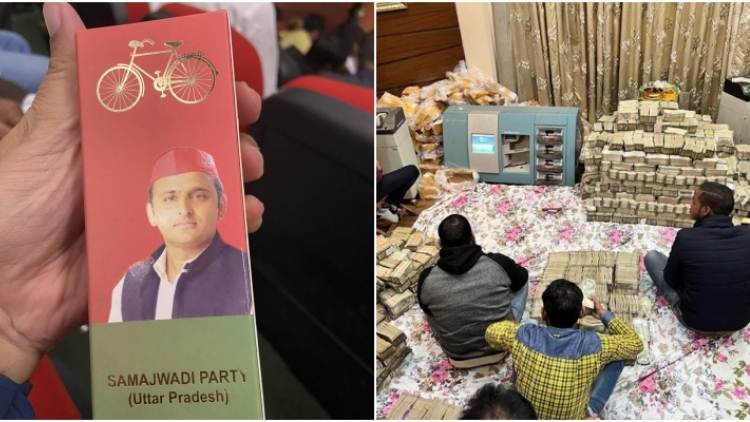 On Thursday, the Directorate General of GST Intelligence(DGGI) and the Income Tax(IT) conducted raids on 2 businessmen. The IT raided the house, office, factory, petrol pump and cold store of trader Piyush Jain. In November this year, Jain had launched the perfume for Samajwadi Party. The perfume was named “Samajwadi Attar”.

According to the reports, IT has discovered heaps of cash up to Rs. 150 crores in currency notes. The notes were packed in cabinets. This tax evasion was done with the help of shell companies. Huge loans were taken using these shell companies which were also used in the foreign transactions of the company.

An IT Official said “Documents related to income and tax are being scrutinized. The process of counting currency notes is still going on with the help of SBI officials. It may get concluded by Friday. It is proposed to seize it for further in-depth investigations.”

First, the IT team reached the Anandipuri residence of Piyush Jain with a currency counting machine. Similarly, IT raids were conducted at Mumbai & Gujarat.

IT and DGGI simultaneously raided the premises of multiple companies owned by Piyush Jain. These companies were located in Mumbai, Kannauj & Gujarat. The premises of Shikhar Pan Masala in Kanpur’s Transport Nagar area has been raided too.

Who is Piyush Jain?

Piyush Jain is one of the biggest perfume manufacturers in India. His company also exports perfumes to various other countries. Jain owns a house, petrol pump, perfume factory and a cold store in Kannauj. He also owns a house, head office and showroom in Mumbai.

Piyush Jain comes from Kannauj. He started with 2 companies. Today, he has close to 40 companies. Many of these companies are located overseas as well. The officials said, “He is mainly into the perfumery business with its base in Kannauj, while the group owns a showroom in Mumbai from where perfumes are sold all over the country and abroad”.