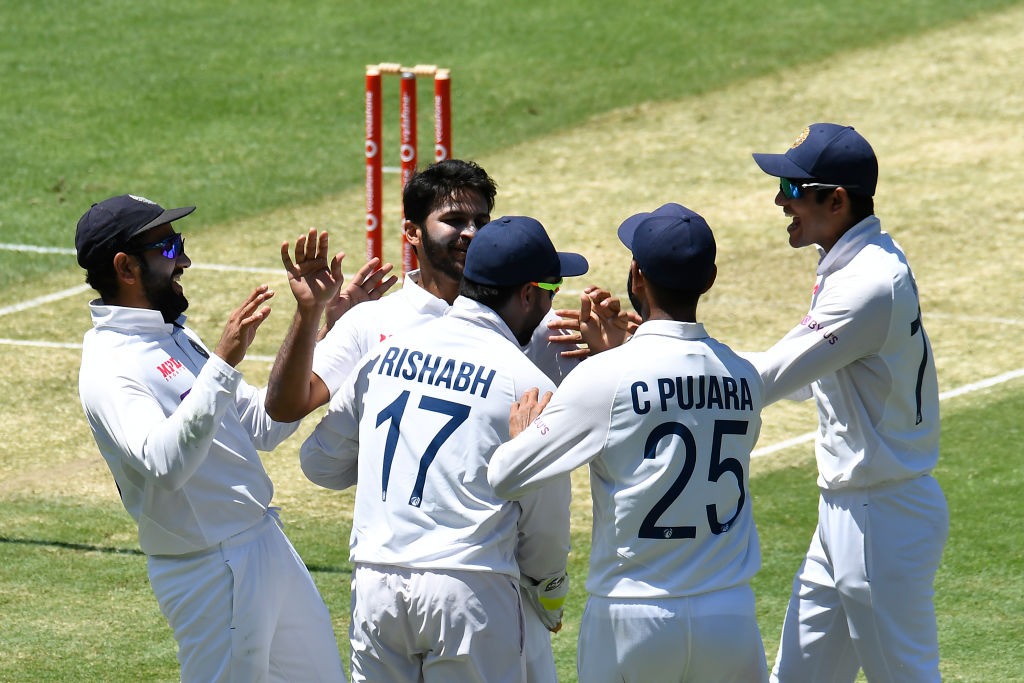 Earlier, Australia scored 274/5 at stumps on Day 1 and they will be aiming to take a big lead, while inexperienced Indian bowlers will look for early breakthroughs on Day 2 and restrict Australia for modest 1st innings score. Meanwhile, Navdeep Saini’s injury only exacerbated India’s struggles on Day 1 as the pacer was the latest casualty to join the ever-growing injury list. He was sent for scans yesterday with results being awaited.

OUT! Bowled! Third of the match for Sundar as dangerous-looking Lyon, who is playing his 100th Test, departs after quick-firing 22. Lyon was exposing his stumps on the sweep, moved right across and once he missed, the ball slid on with the angle to crash into middle and leg. Lyon b Washington Sundar 24(22) [4s-4], AUS 354/9

OUT! Third wicket in the span of 15 minutes and this time, it’s Pat Cummins who bites the dust as Thakur strikes again. Dipping full-toss and Cummins was looking to work it through the on-side, but missed it completely as the ball struck bang in front as he was given OUT LBW. Cummins decided to review it but it was of no use as the impact was in front of middle and it was hitting leg. Cummins lbw b Thakur 2(8), AUS 317/8

And another – Cummins is gone lbw.

OUT! Bowled! And now Cameron Green departs as Washington Sundar strikes. Sundar pushed through flatter with the angle and Green prodded forward as he played for the non-existent turn – the ball went straight on, past Green’s defensive prod and crashed into the middle-stump. Green b Washington Sundar 47(107) [4s-6], AUS 313/7

Oh my goodness! Did that one go the other way? @hcltech | #AUSvIND pic.twitter.com/H8khO6TjK3

OUT! A much-needed breakthrough for India as Shardul Thakur removes Aussie skipper Tim Paine, who just completed his fifty. Fuller length, teaser outside off and Paine, while attempting to go for a drive, produces a thick outside edge which flew to Rohit at second slip. Paine c Rohit b Thakur 50(104) [4s-6], AUS 311/6

Sensible cricket by Green and Paine see Australia go past 300-mark, while Indian bowlers search for their first breakthrough on day 2.

Hilarious act by Australian fans as an entire bay’s worth of Star Wars stormtroopers have just arrived to sit beneath the press box, so we’ll look forward to seeing whether they veer towards obnoxiousness or jolliness later in the day.

Talking about the pitch then, Aussie legend Shane Warne said the wicket looks good for batting on day two, but predicts it will begin to take spin well while the fast bowlers could take advantage of the cracks already appearing.

“That one crack that’s on a pretty good length that we heard a few of the players talk about yesterday, that could really become a weapon for the fast bowlers,” he said.

“That crack — that doesn’t normally happen until day three, maybe late-day four so this is a lot drier than normal. It looks like a day three pitch already.”

Marnus Labuschagne’s 108 was the cornerstone of Australia’s 274 for 5 at stumps on the opening day of fourth and final Test against India in Brisbane on Friday. The hosts were reduced to 17 for 2 after opting to bat on a bouncy and batting wicket but recovered later, thanks mainly to Labuschagne. At stumps, captain Tim Paine and Cameron Green were batting on 38 and 28 respectively.

Labuschagne’s 204-ball knock had nine boundaries. He was dropped on 37 by Ajinkya Rahane off the bowling of Navdeep Saini.

The Australians scored runs at a fair clip in the second session after they were 65 for 2 at lunch, with Labuschagne going great guns. The hosts added 89 runs from 27 overs and lost just one wicket in that session.

But India made a comeback in the final session, with debutant T Natarajan getting rid of Labuschagne and Matthew Wade (45) in the space of two overs after the duo had stitched 113 runs for the fourth wicket.

The other debutant Washington Sundar got rid of the dangerous Steve Smith (36) for his first Test wicket.

250 up for Australia as Tim Paine and Cameron Green are playing sensible cricket to put Australia on top and avoid losing anymore wickets before stumps.

Injury trouble for India continues as Navdeep Saini has now gone for scans.

OUT! Natarajan strikes again and gets the big wicket of Labuschagne, who just like Wade went for the pull but ended up hitting straight up in the air and this time it’s wicket-keeper Pant who takes the easy catch. Labuschagne c Pant b T Natarajan 108(204) [4s-9]

OUT! A much-needed wicket for India and it’s debutant Natarajan who removes Wade for his maiden Test wicket. Short of a good length and just outside off and Wade who was trying to go for a pull, edged it straight up in the air as Shardul came across from mid-on and gobbled it.  Wade c Thakur b T Natarajan 45(87) [4s-6]

CENTURY for Labuschagne and that’s his fifth Test ton. He has definitely punished India for the dropped catches. AUS 198-3

Labuschagne is inching towards his century after completing his half-century before Tea. Meanwhile, he’s getting complete support from the other end as Matthew Wade has been calm and composed so far and on his way to complete fifty.

Another injury scare for India as pacer Navdeep Saini has complained of pain in his groin and is currently being monitored by the BCCI medical team.

Navdeep Saini has complained of pain in his groin. He is currently being monitored by the BCCI medical team.#AUSvIND pic.twitter.com/NXinlnZ9W5

FIFTY for Marnus Labuschagne who punish India for the dropped catches. Moreover, he has been dropped 10 times in Test cricket since the 2019 Ashes series.

OUT! Big wicket for India as debutant Washington Sundar removes Steve Smith. Just a normal tossed up delivery, spinning into the pads of Smith, who instinctively flicks it but ends up hitting it straight into the hands of Rohit at short-mid wicket. Smith c Rohit b Washington Sundar 36(77) [4s-5]

Maiden Test wicket for @Sundarwashi5 and it is a biggie!

Australia 87/2 after 34 overs: Labuschagne is charing up past Smith now, after a slow first session and both the batsmen are inching towards their half-centuries. On the other hand, Indian bowlers are desperately looking to break this partnership and put Australia on backfoot again.

Australia 39-2 after 17 overs: The slightly manic start to this day has now settled into a bit of Test match rhythm, with Australia’s two key batsmen – Smith and Labuschagne in the middle, aiming to build a big partnership after early setbacks. Onus on Indian bowlers to keep Australia on backfoot.

OUT! Another one bites the dust and this time it’s Marcus Harris, who is sent back by Shardul Thakur. A nice inswinger by Thakur and Harris hits it straight to Washington at square leg. Both the openers back now. Marcus Harris c Washington Sundar b Thakur 5(23), Aus 17/2

Maiden Test wicket for @imShard and maiden Test catch for @Sundarwashi5. The fast bowler strikes off his first ball in the match. Harris gone for 5. #TeamIndia #AUSvIND

Australia 16/1 after 6 overs: Marcus Harris and Marnus Labuschagne give some stability to Australia after they lost Warner in the first over. Meanwhile, Siraj and debutant Natarajan are bowling the first spell for India and giving the batsmen hard time with their swing and pace.

OUT! Edgedddd and gone! Big Wicket as Siraj removed Warner in the very first over of the game. Fullish delivery angling across just outside off stump and Rohit Sharma takes a superb diving catch at second slip following thick edge by Warner. Warner c Rohit b Siraj 1(4), Aus 4/1

David Warner and Marcus Harris come out to open for India as Mohammed Siraj bowls first over for India.

The Australian team giving Nathan Lyon a Guard of Honour on the occasion of his 100th Test. The teams are lining up for the anthems.

Australia skipper Tim Paine says “The pitch looks a lot drier than it normally does this early, and there’s already one big crack running down the middle.”

Let’s hear it for @Sundarwashi5, who gets his #TeamIndia 🧢 from @ashwinravi99. He stayed back after the white-ball format to assist the team and is now the proud holder of cap number 301. 💪🙌 pic.twitter.com/DY1AwPV0HP

The stuff dreams are made of. A perfect treble for @Natarajan_91 as he is presented with #TeamIndia‘s Test 🧢 No. 300. It can’t get any better! Natu is now an all-format player. #AUSvIND pic.twitter.com/cLYVBMGfFM

Let’s hear it for @Sundarwashi5, who gets his #TeamIndia 🧢 from @ashwinravi99. He stayed back after the white-ball format to assist the team and is now the proud holder of cap number 301. 💪🙌 pic.twitter.com/DY1AwPV0HP

How can fans watch India vs Australia 4th Test ?

In 2017-18 Cricket Australia had signed a 6 years deal for all Live Broadcast and Live Streaming of the cricket played in Australia with Sony Pictures Sports Network. The deal will allow Sony to exclusively Live Stream the series on SonyLIV.

Cricket fans in the Indian Sub-Continent will have to subscribe to SonyLIV to enjoy the uninterrupted Live Streaming of the India vs Australia series on SonyLiv.com.

How to watch India vs Australia 4th Test live streaming online in India?