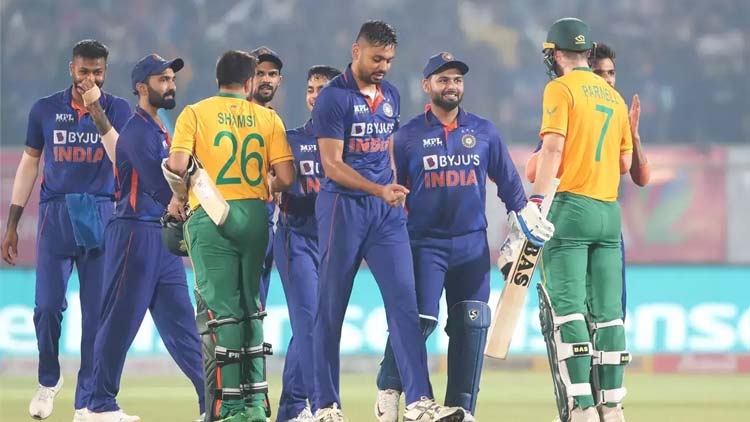 Despite winning the toss, and choosing to bowl first, South Africa lost against India by 48 runs in the third T20I that was played in the Dr. Y. S. Rajasekhara Reddy International Cricket Stadium in Vishakhapatnam, Andhrapradesh.

India set up a good target of 180 for the South Africans to chase where in Ruturaj Gaikwad scored his maiden T20I half-century off 35 balls. Ishan Kishan, joining the party, smashed a great 54 off 35 balls as well. Hardik Pandya played a much-needed knock of 31 not out off 21 balls towards the end.

South African bowlers ended up being a little hasty on the field, dropping a catch here and there. The only bowlers that were able to pick up wickets in this one were Dawine Pretorius (2-24, 4 overs), Keshav Maharaj (1-24, 2 overs), Kagiso Rabada (1-34, 4 overs) and Tabraiz Shamsi (1-36, 4 overs).

As South Africa padded up for chasing, they lost a couple of early wickets during the powerplay. Rishabh Pant’s exceptional wicket keeping along with precise bowling fetched them quite a few wickets. The star bowlers, Harshal Patel and Yuzvendra Chahal made it an easy slide for India to win through this match, alongside other bowlers.

Harshal Patel sparked a new best score of 4-45 in 3.1 overs. Chahal took 3 wickets in 4 overs for 20 runs, including the much needed and important  wickets of Pretorius and Klassen that were the set batsmen at the time, ready to make a comeback into the game.

Axar Patel and Bhuvaneshwar Kumar contributed to the wickets taking one each, and Anrich Nortje’s run out that made South Africa finish with 131 runs all out with 5 balls remaining.

Yuzvendra Chahal was awarded as the man of the match for his 3-20, clearing all the doubts and questions that arose of him being a deserving player or not. India saved the series by winning this do-or-die match. South Africa still leads the five-match T20I series by 2-1.