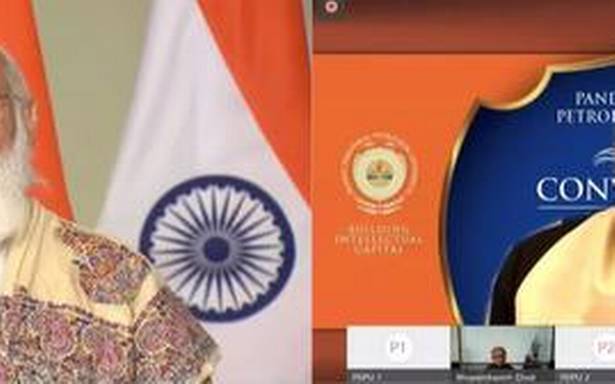 Reliance Industries Chairman and Managing Director Mukesh Ambani on Saturday said India has entered a crucial phase in its fight against coronavirus and cannot afford to let the guard down at this juncture.

He said the bold reforms undertaken by the government will lead to swift recovery and rapid progress in the years to come.

The remarks come amid growing number of COVID-19 cases in certain pockets of the country, which has led authorities to re-introduce restrictions on movements like in the case of Ahmedabad and also mull restricting travel to cities like the national capital.

“India has entered a crucial phase in the fight against COVID-19 pandemic. We cannot afford to let our guard down at this juncture,” Mr Ambani, who is also the president of the Pandit Deendayal Petroleum University (PDPU), said at the institute’s eighth convocation.

He added that India is an ancient land which has faced many adversities in the past and has emerged much stronger each time, because resilience is deep-rooted in the people and the culture.

Mr Ambani, who addressed the gathering virtually, said he sees “explosive and exponential growth” in the post-COVID era and asked the graduating students to venture out with hope and confidence without being anxious.

Growth will create unprecedented opportunities and in the next two decades, India will be among the top-three economies of the world, he said.

Mr Ambani, whose company is heavily invested in the oil business and runs one of the largest refineries in the world, said the challenge facing the world currently is whether we can produce energy to sustain our economies without harming the environment.

“By the middle of the century, the world will use twice as much energy as we do today and India’s per-capita energy needs will be more than twice in the next two decades,” he said.

“We need disruptive solutions in renewables, low carbon and carbon recycle technologies to achieve this goal. We need breakthroughs in new energy sources such as green and blue hydrogen. We also need great innovations in energy storage, saving and utilisation,” he said.

Over 2,600 students, including 284 pupils from 39 countries, graduated at the ceremony.