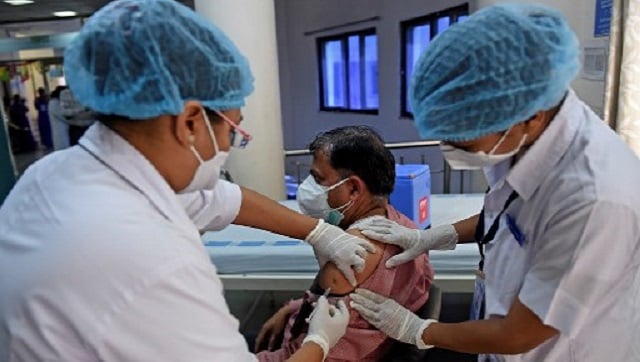 Maharashtra, which accounts for 67 percent of total active cases along with Kerala, has administered the vaccine to less than 21 percent of its healthcare workers

A medical worker inoculates a doctor with a Covid-19 vaccine in Ahmedabad. AFP

New Delhi: India has carried out the fifth highest number of COVID-19 vaccinations by inoculating 2.03 million people till 26 January, the Health Ministry said, stressing the number of beneficiaries who have received the shots has crossed 25 lakh till Thursday afternoon.

“As per our world data till 26 January, India, which launched its nationwide vaccination drive on 16 January, had carried out the fifth highest number of vaccinations in the world by vaccinating 2.03 million people. The important point is many other countries are showing their progress for over 50 days while India is showing its vaccination on 26 January after just 11 days,” Bhushan said.

Bhushan said that the number of beneficiaries who have been vaccinated against COVID-19 in India since the nationwide drive was rolled out has reached 25,07,556 till 28 January at 2 pm.

India’s cumulative COVID-19 positivity rate is 5.51 pc and is declining while the active cases are less then 1.75 lakh after seven months and is declining, Bhushan stated.

Two states, Kerala and Maharashtra, account for 67 per cent of total active COVID-19 cases in country, he said.