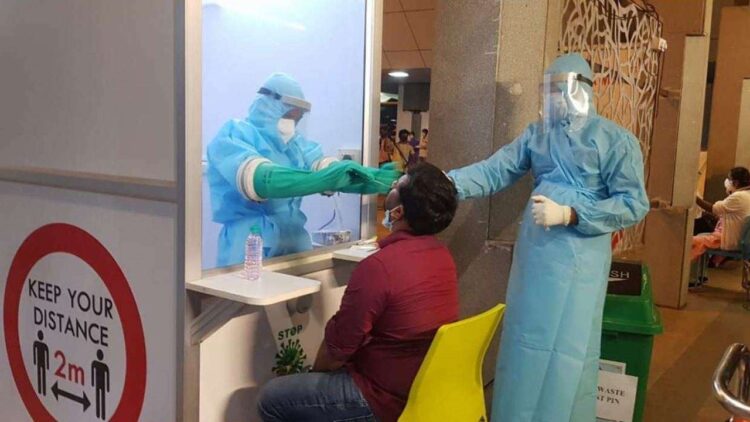 India’s daily coronavirus infections hit another record on Saturday for the highest tally since September, while daily deaths reached a five-month high, a Reuters count based on data from the health ministry showed.

India recorded 89,129 new infections and 714 deaths, the ministry said. That was the biggest single-day rise since September 20 last year and the most deaths since October 21, according to a Reuters tally.

The country has been recording a spike in cases for over three weeks. Maharashtra, Punjab, Karnataka, Kerala, Chhattisgarh, Chandigarh, Gujarat, Madhya Pradesh, Tamil Nadu, Delhi and Haryana are states of “grave concern”.

The active cases have now increased to 6,58,909 comprising 5.32 percent of the total infections, while the recovery rate has further dropped to 93.36 percent.

Meanwhile, the death toll increased to 1,64,110 on Saturday with 714 new fatalities.

The number of people who have recovered from the disease surged to 1,15,69,241, while the case fatality rate stood at 1.32 percent, the data stated.

Vaccination drives have been intensified amid the recent surge of cases, and many states are considering imposing fresh curbs on the movement of people.

India fought through the first wave of infection six months ago and recorded the highest single-day spike of 93,617 cases on September 16. The highest number of deaths recorded in a day were 1,169 on September 15.

The Centre has advised high-burden states and Union territories to take stringent measures for containment of the surge.

So far, 7.30 crore doses of coronavirus vaccine have been administered in the country since the drive began on January 16 after approval for ‘Covishield’ and ‘Covaxin’.

The Centre has advised high-burden states and union territories to take stringent measures for containment of the surge.