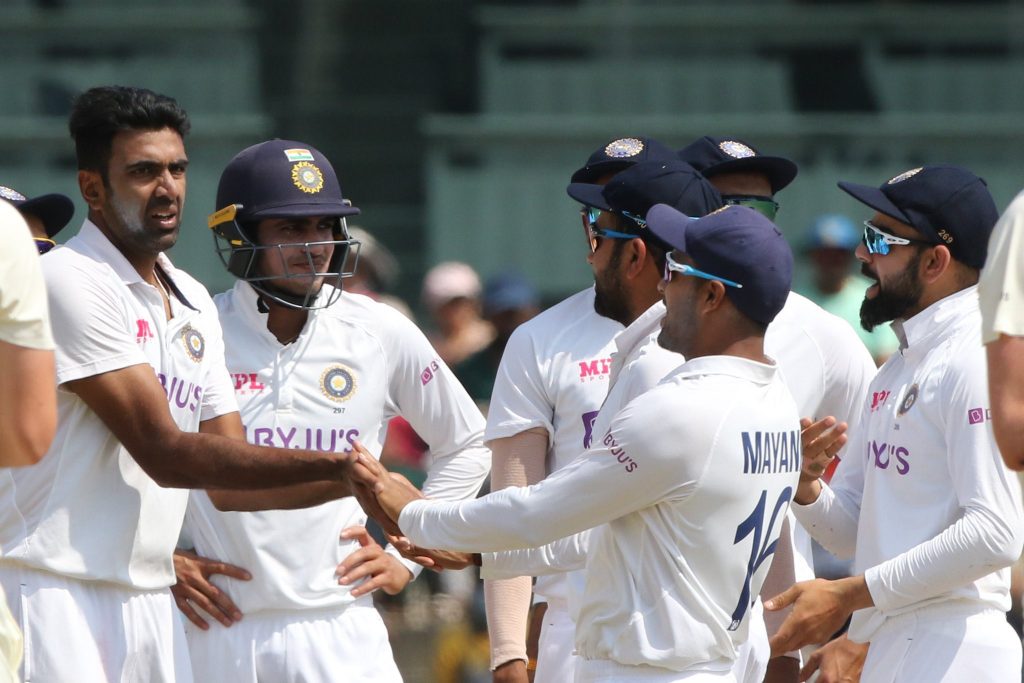 As many as 15 wickets fell in the second day’s play at the Chepauk stadium on Sunday with India resting control in the day’s play. After bowling out England for 134, India lead the game by 249 runs in the second innings with them scoring 54/1 at stumps. It was a day which saw the bowlers from both teams dictate terms in the proceedings of the day’s play. Ravichandran Ashwin got a few landmarks as he took his 29th fifer in Tests.

India started the day on 300/6 losing their final four wickets for just 29 runs. Rishabh Pant (58*) stroked his way to another Test fifty but ran out of partners at the other hand. Moeen Ali and Jack Leach shared six wickets amongst themselves to limit India. Olly Stone and Moeen Ali took the last four wickets in the Indian innings. Stone took two and Ali took two. Stone dismissed Kuldeep and Siraj while Moeen Ali accounted for Axar and Ishant Sharma. The England bowlers did not give any extras in their bowling effort in the first innings.

Also Read: England Register Unique Record After Bowling Out India For 329 In Chennai

England did not have the best of starts with the bat either. Rory Burns (0) was the first wicket to fall. He was trapped by Ishant Sharma followed by Dominic Sibley (16) trapped by Ravichandran Ashwin. The biggest England wicket was taken by Axar Patel. JoeRoot (6) trying to play his favourite sweep shot, edged one to get caught by Ashwin inside the circle.

The England batters found batting even touch in the final session with the Indian spinners getting more purchase from the wicket. Ashwin came back to dismiss Ben Stokes (18) just after lunch to leave England tottering having lost five wickets. Ben Foakes (42) and Ollie Pope (22) added a 35-run stand before Mohammed Siraj dismissed Pope with his very first ball on Indian soil. Rishabh Pant completed a diving catch to his left.

The Indian wicketkeeper held onto another stunner as Ishant Sharma dismissed Jack Leach as England’s procession of wickets continued. Spin twins, Axar and Ashwin removed Moeen Ali and Olly Stone in between before Ashin came back to dismiss Stuart Broad and end England’s first innings.

Ashwin took five for 43 as Axar took two wickets in his Test debut. Ishant Sharma took two as well. Playing his first Test after over three years, Kuldeep Yadav bowled a wicketless spell of none for 16 from six overs. When he came onto bowl, half the England side was back into the pavillion. Compared to the last game where they bowled over 35 no-balls, they bowled just one in the first innings of the second Test.

India started their second innings with an opening stand of 42 between Rohit Sharma (25*) and Shubman Gill (14). Jack Leach provided England their first wicket in the second innings by dismissing Gill. Cheteshwar Pujara joined Rohit at the wickets and took India to 54 at stumps. India scored just 18 runs in their last 10 overs at the expense of Gill’s wicket.