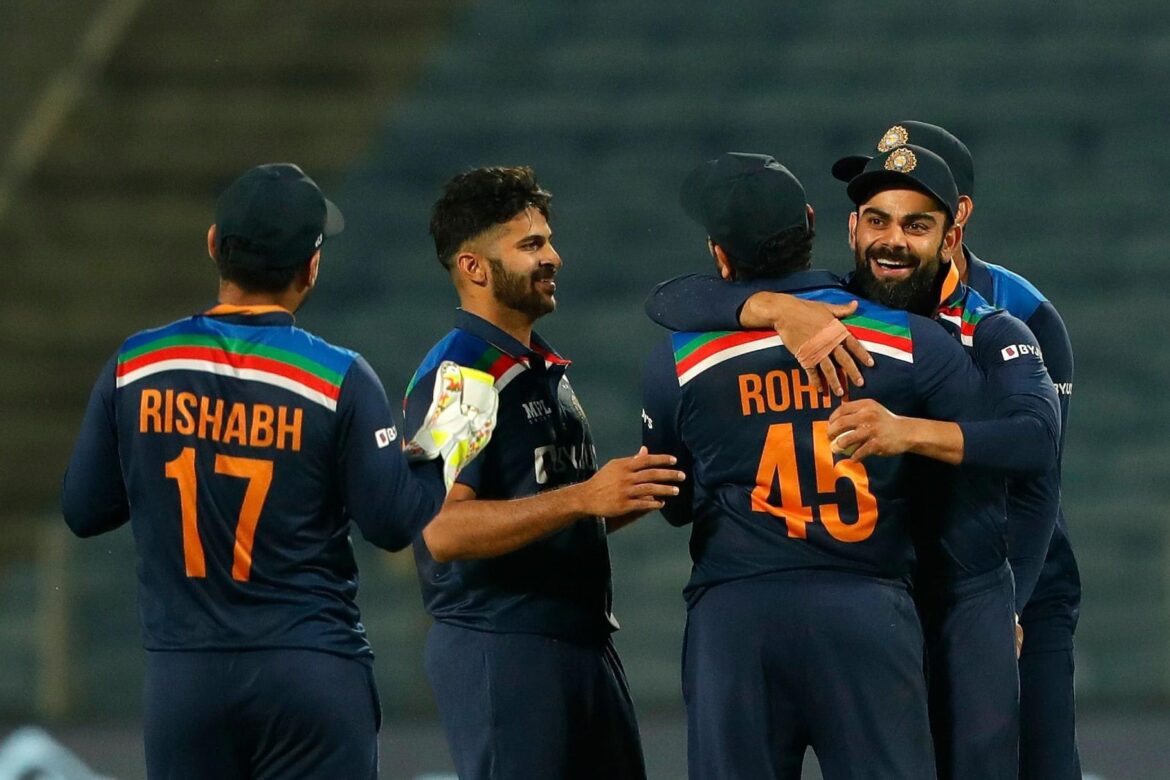 India beat England by seven runs to win the third ODI and the series 2-1 in Pune on Sunday. The game was too close for comfort as the final hour produced edge-of-the-seat drama with the balance of the game swinging both ways. Natarajan kept a cool head and defended 14 in the final over to hand India a memorable series win. India thus have beaten England in all formats in this tour to cap off a memorable limited-overs series. More about the 3rd ODI report in detail below.

Sam Curran scored the joint-highest score ever batting at number eight scoring an unbeaten 95. However, his valiant effort was not enough as England fell short by seven runs. England were 200 for 7 after 30 overs with India well in front in the game. Before that they were 95 for 4 with all their top-order batters including stand-in skipper Jos Buttler back in the pavillion.

England’s lower-middle order forged a tremendous turnaround and gave India a real scare in the run chase. Other than Curran, Dawid Malan (50), Liam Livingstone (36), Moeen Ali (29), Adil Rashid (19) and Mark Wood (14) all played their part in taking England within touching distance. Curran formed crucial partnerships with the likes of Ali, Rashid and Wood. While Curran and Rashid added 57, Wood added 60 with Curran to keep England in the contest. The England all-rounder for his herculean effort was rightly adjuged as the Man of the Match.

The Indian bowlers picked the first four wickets at regular intervals. Bhuvneshwar Kumar picked both the openers while Shardul Thakur picked Malan, Buttler, Livingstone and Rashid in the middle order. Natarajan picked up the crucial wicket of Ben Stokes after he was dropped early on in his innings by Hardik Pandya. Hardik dropped Curran too on 22 as the Indian fielders missed a total of three catches in the decider.

Earlier in the game, England skipper Jos Buttler won the toss and asked India to bat first. Kohli lost all five three tosses in the ODI series. Rohit and Shikhar added an opening stand of 103 runs inside 15 overs.

India then lost four quick wickets in a space of next 50 runs and were down to 157/5 from being 103 for no loss. Rishabh Pant (78) yet again played a counter-attacking knock and with Hardik Pandya (64) added 99 runs in quick time. The partnership provided momentum to the Indian innings after India lost four quick wickets. Both the batsmen got to their respective half-centuries but got out at the wrong time. Shardul Thakur hit a quickfire 30 but India lost wickets at regular intervals, losing their last 6 for just 74 runs. India lost their last four wickets for just 8 runs.