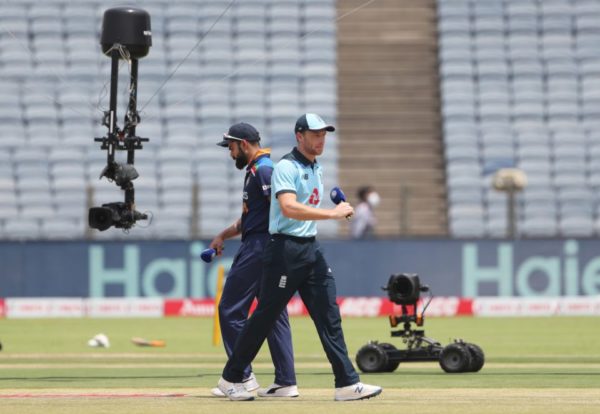 India holds their nerves to defeat England in the thrilling deciding ODI in Pune. Sam Curran was the hero for England with the bat as he kept his team in the match till the final over. Eventually, it needed a perfect last over from T. Natarajan to seal the ODI series for India. Curran played a knock for the ages and scored 95 from 83 balls but India won the match by 7 runs.

India Wins the ODI Series By 2-1 Against England

The England batting depth once again came to the fore as they kept the match close even after losing wickets in clusters. Here’s what the winning captain Virat Kohli and losing skipper Jos Buttler said in the post-match presentation.

“A fantastic game, both sides made some mistakes but played some brilliant cricket. We witnessed an incredible knock from Curran to nearly get us over the line, but congratulations to India on winning. We’ve learnt a lot as a side and seen many guys stand up and take the lead. The white-ball leg was incredibly competitive. These are the conditions we will face in the near future in the World Cup. It’s a great experience for the young guys to play a top-class side like India and they will be better cricketers for it. We didn’t have those big partnerships to take us over the line. We’ve played excellent cricket for a number of years, the talent pool in white-ball cricket is growing and creates competition in the squad and drives us to do better”, said Buttler.

“When the top-two battle each other, we’ll get exciting games. No one will throw in the towel, and Sam played a really good innings to keep them in the hunt. However, our bowlers picked up wickets, and it moved from us finishing it off to them getting over the line before Hardik and Nattu pulled it back. It’s most disapponting for the guy who drops the catch, but as much as you get disappointed, catches get put down and sometimes they cost you. There’s no lack of intent, and our body language was outstanding”, said Virat Kohli.

Meanwhile, for his outstanding knock under immense pressure, Sam Curran has been adjudged the player of the match award. Also, Johnny Bairstow who smashed 94 and a match-winning century in the second ODI won the player of the series award. Here’s what they said in the post-match presentation.

“We didn’t win the game, but happy with the way I played. I love winning, but it was a great experience. I haven’t done that for England for a long time, but in the end we lost. I wanted to take the majority o the balls and take it deep. It was hard to defend, but Natarajan bowled really well in the end and shows why he’s a really good bowler. I realized that one side was shorter and Bhuvi is a fantastic bowler so I played him out. Fantastic ground, great pitch and an amazing batting line-up for India, so it has been a great learning curve. Looking forward to the IPL in these conditions in a few weeks time”, said Curran.

” I’ve been pleased with my striking, but we’d like to be on the winning side. Today, it just wasn’t meant to be. I didn’t score a lot in the Tests, but it was pleasing to come back and do well in the white-ball leg and I’ll be taking the confidence into the IPL. We know Bhuvi’s skills, and I think getting outside off is the way to counter it”, said Johnny Bairstow.