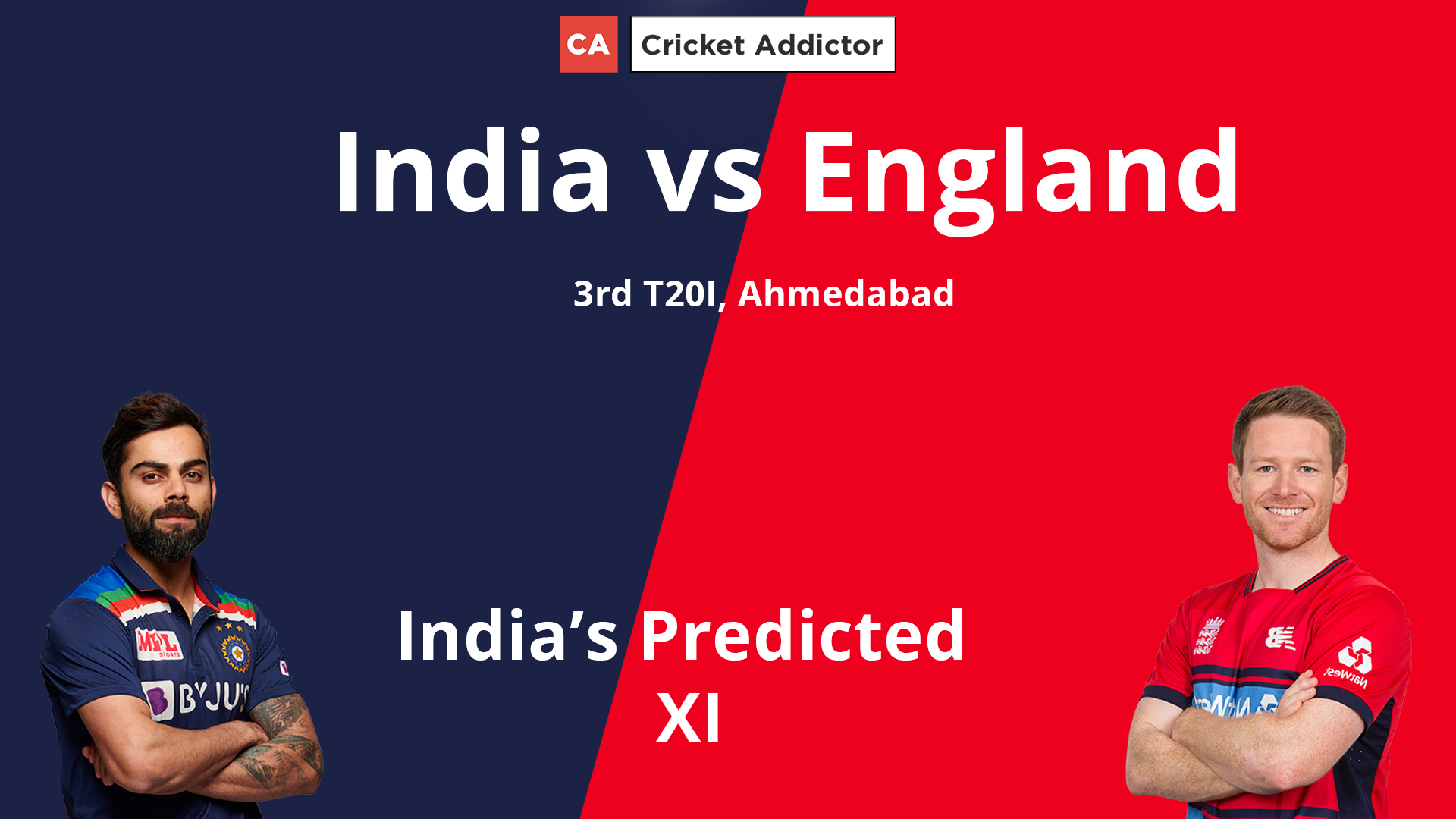 The hosts Indian team will now face the visitors England in the third game of the five-match T20I series this Tuesday (16th March) evening at Narendra Modi Stadium (Motera, Ahmedabad).

This T20I series is currently in the level position by a 1-1 margin. After England won the first game of this series by 8 wickets, the hosts comfortably beat the visitors in the next match by 7 wickets.

The limited-overs vice-captain Rohit Sharma was rested for the first two matches of this T20I series as he consistently played some Test matches in recent times. Rohit is in good form at the present time and the Indian team wants to see the same dangerous Rohit Sharma in this T20I series.

Ishan Kishan made his international debut in the last game and became the second Indian to score a fifty on his T20I debut. Surely he has great potential, and he showed a glimpse of his quality during that T20I debut. He is likely to open with Rohit Sharma in the forthcoming match.

Captain Virat Kohli has recently faced some highs and terrible lows in quick succession. After scoring two consecutive ducks, Kohli scored the match-winning 73 not out in the last T20I, which was a great relief for the team and fans.

While KL Rahul is a very important member of this Indian limited-overs sides, he scored 1 and 0 runs respectively in the first two T20Is of this series, where he batted as an opener. But before this series, he last played a professional match in early December 2020. So, the team needs to give him some time to get his shape back.

In the opening match of this T20I series, when all other home batsmen failed to handle the English bowlers, Shreyas Iyer highly impressed with his bat as he scored 67 off 48 balls. In the last game, he remained not out on 8 runs in their successful chasing as he hadn’t much big job in that game.

Wicket-keeper batsman Rishabh Pant is now continuously improving both as a wicket-keeper and batsman. Many experts and cricket fans are loving and enjoying his fearless cricket as it is proving as the big game-changer for the team.

Hardik Pandya is a very crucial all-rounder in this limited-overs sides, who was in great form with the bat during the limited-overs series in the last Australia tour. While he has recently restarted his pace bowling, his aggressive batting is the crucial point for the Indian team.

In the last T20I, pacer Shardul Thakur bowled very well as he had bowling figures of 4-0-29-2. He is playing an important role in the death overs, where he conceded 13 runs in his final two overs in the last game.

Off-spinner Washington Sundar has a versatile character. He is very economical in the powerplays, and he is similarly useful in the other overs of a T20I match. In the last game, he also had bowling figures of 4-0-29-2. He is also very useful as a left-handed lower-order batsman.

Before this T20I series, the Indian team missed the right-arm pacer Bhuvneshwar Kumar for more than a year, majorly due to his fitness issues. After experiencing the wicket-less night in the opening match of this series, Kumar got one wicket in the last game (1/28) as he provided the early breakthrough for the hosts by dismissing the England opening batsman Jos Buttler for a golden duck.

The leg-spinner Yuzvendra Chahal is now the leading wicket-taker for Men in Blue in the T20I cricket. Undoubtedly, he is a very crucial name in this limited-overs team set up. While he took one wicket each in both the games in this series, the team management wants to see his consistent performances.

India’s daily COVID-19 deaths near 4,000 as police sent to halt dumping of bodies