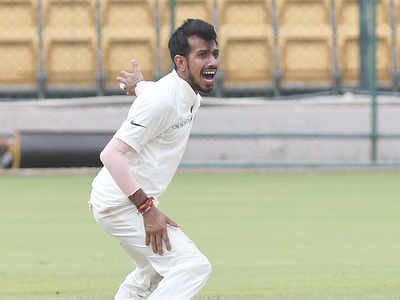 India had lost the first Test against England in Chennai by 227 runs and Indian captain Virat Kohli and the team management received lots of flak for their choice of bowling resources in the playing XI. The lack of support that the three main bowlers Ishant Sharma, Jasprit Bumrah and Ravichandran Ashwin got was missing.

Shahbaz Nadeem and Washington Sundar were picked in absence of injured Ravindra Jadeja and Axar Patel and they managed to pick four wickets in between them in two innings. Shahbaz Nadeem bowled 59 overs for 233 runs, while Sundar gave 98 runs in 26 overs in the first innings, but was employed for only one over in the second innings.

India Should Look To Add Yuzvendra Chahal In The Test Squad: Aakash Chopra

The former India opener Aakash Chopra came up with an out-of-the-box solution for this conundrum and suggested that India should consider bringing in leg-spinner Yuzvendra Chahal in the Test squad. It has to be noted here that India has one leg-spinner in Rahul Chahar in their Test squad at the moment, but Chahal is more experienced than Chahar.

In the 31 matches Yuzvendra Chahal has played, the wily spinner has snared 84 wickets at an average of 33.21. Though Chahal is more known for his prowess with the white-ball in limited-overs cricket, the presence of an experienced leg-spinner would add a lot of variety to India’s bowling arsenal.

Also, it has to be mentioned here that England has 5 right-handed bowlers in their playing XI. And this makes the inclusion of a leg-spinner all the more important in the Indian playing XI. The 30-year-old leggie from Haryana has shown that he is a street-smart operator and can give the visiting batsmen a tough time if given a chance.

Aakash Chopra’s suggestion is understandable keeping in mind that the wrist spinners can pile the pressure and get the ball to turn even on the flattest of tracks. Also, it has been indicated that Axar Patel has recovered from his injury concerns and is expected to be available for the second Test match against England in Chennai.

Slightly left-field thought/suggestion….India should look to add Yuzi Chahal in the Test squad ASAP. Considering that the bio-bubble protocols will take time….try to make him available for the third Test. #IndvEng