Home SportsCricket India vs England 2021: I Am Bit Disappointed With My Dismissal, Says Cheteshwar Pujara

India vs England 2021: I Am Bit Disappointed With My Dismissal, Says Cheteshwar Pujara 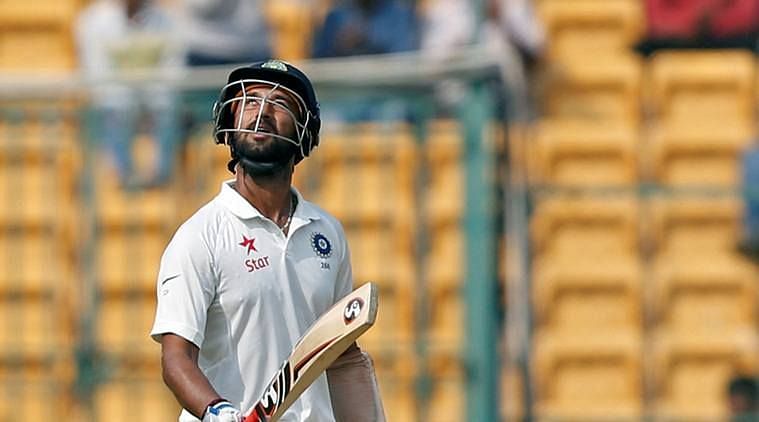 Indian top-order batsman Cheteshwar Pujara said that he was a ‘bit disappointed’ about the way he got out in the first innings after doing all the hard work at the crease. Pujara and Pant brought back India in the game by stitching a 119 run partnership when India was struggling at 73 for 4. Pujara used his feet beautifully against the England spinners and looked very comfortable among the Indian batsman.

He hit 11 fours in his knock of 73 runs of 143 deliveries and was on his way to a well deserved century while the incident took place. Cheteshwar Pujara’s pull shot took a wicked deflection off the short-leg fielder and went straight into the hands of Rory Burns for a simple catch ending his marvellous innings, unfortunately. Pujara who has scored a lot of half-centuries in recent times has not been able to convert into a hundred.

Pujara said that he was unlucky to be dismissed in that fashion and he told that he could do nothing as a batsman about it. He told that it was the only way to get him out as he was seeing the ball really well and playing all his shots. He expressed his disappointment over the dismissal and the wicket turned out to be a blessing in disguise for England who has played the game perfectly until now.

“That is something which I can’t do as a batsman. It was unlucky, I would just say that because that’s the only way I thought I could have got out. I was batting really well, I was playing my shots. The way I was seeing the ball, everything was going perfect but that was the most unfortunate way one can imagine. A bit disappointed but there’s nothing which I can do as a batsman,” Cheteshwar Pujara said in a virtual press conference after the end of day’s play.

Pujara told that he loves batting with Pant and both the batsman rescued on numerous occasions in the recent tour to Australia. Pujara told about the left and right combination being handy and the scoreboard is always moving when Pant is at the crease. Pujara stressed the importance of the partnership and he felt happy for Pant’s recent batting form.

“When a batter is going after the bowler from one end and if I’m around, we always have a chat in between the over and there is a good right and left-hand combination which frustrates the bowlers. I think when the scoreboard is moving, we were building a good partnership and we batted enough now, talking about the last tour in Australia. The way Rishabh bats especially against spinners, I think he likes to take them on and that’s the way he will go about it,” he said.

“It’s been a crucial partnership for us and I hope this continues. I love batting with him. I’m really happy with the way overall he’s playing. He still has to learn a few more things, he still has to put the team in a commanding position because he is capable of that and he’s missing out on hundreds. I’m sure he will learn from this but it is good that he is in form,” he added.

Meanwhile, the Test match is well poised as England have gone into the lunch at 1 run for 1 wicket in their second innings after India managed 337 in their first innings.