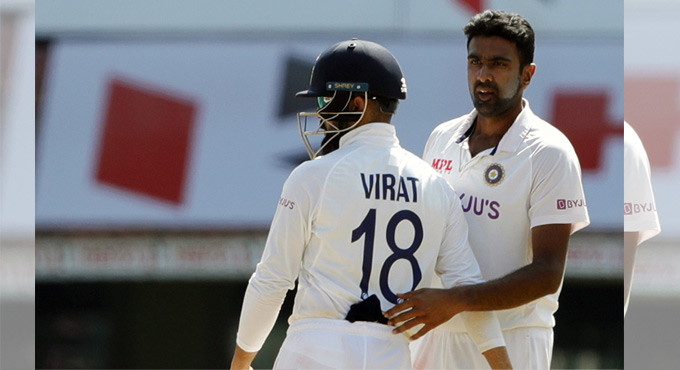 The legendary former opening batsman of India Sunil Gavaskar has lauded Virat Kohli and Ravichandran Ashwin as their bat did the talking on day three at Chepauk.

Former Indian cricketer Sunil Gavaskar has lauded Indian captain Virat Kohli for showing everyone how to bat on a challenging surface such as the one at the Chepauk stadium in the ongoing second Test between India and England.

Sunil Gavaskar: Virat Kohli And Ravichandran Ashwin Exhibited On How To Play On The Surface Aidsing Spinners

After India won the toss, the hosts went on to score 329 in the first innings with Rohit Sharma scoring a gigantic 161. Meanwhile, England reciprocated with a total of only a paltry 134 in their first innings and many fans and experts around the world had criticized the Chepauk wicket saying it is not a 5-day pitch.

Michael Vaughan called the pitch a “shocker,” while adding on the same breadth that it does not make for five-day cricket while looking at how the England batsmen struggled against the Indian spinners. In reply, legendary spinner Shane Warne pointed to Rohit Sharma’s knock and said England should have bowled better instead.

But according to Sunil Gavaskar, the way captain Virat Kohli and veteran spinner Ravichandran Ashwin have batted in India’s 2nd innings, they have shown the rest of the world how to bat on a surface like this one.

“It was very brisk. He was like ‘I’ve got a zero in the first innings, but I’ve come for the fight’. That’s a completely different scene you know, the body language is conveyed to the opposition.

“And looked at the way he has used the crease, the footwork, to go back to play the ball and play it as late as possible, play it as close to your body as possible. And then when the half volley came along he was hitting it, he wasn’t gonna miss out,” Sunil Gavaskar said during Tea, day three, on Star Sports.

“And both of this count, you cannot fault the Indian captain. Because he’s got the superb technique and his temperament is fantastic,” he said about Kohli.

On a turning track aiding spinners where the rest of the Indian batsmen struggled on the third day, Virat Kohli batted with immense grit, steady resolve, and determination and along with all-rounder Ravichandran Ashwin, added a 96-run partnership to extend India’s lead to above 400.

Virat Kohli fell after scoring 62 while Ravichandran Ashwin scored 106 as India set England a daunting target of 482 to chase. England is 53/3 with Daniel Lawrence and Joe Root at the crease.

Sunil Gavaskar: Ravichandran Ashwin Has Shown Everyone How To Bat On Turning Chepauk Surface

Ravichandran Ashwin, who scored a ton, has shown not only how to bowl in such conditions but also let his willow do the talking in India’s 2nd innings.

“And he’s walked the talk. Yesterday after having taken those five wickets, at the press conference he [Ashwin] was asked if one has to be a little bit patient on this surface and then get used to it.

“And now he has walked the talk, he has shown everyone exactly how to bat on this surface. Now, he scored a 60, a very very valuable 60. But like I said, he actually said that this is what you need to do and he has gone out and done it himself,” Sunil Gavaskar said about Ashwin.

Ravichandran Ashwin, who claimed 5-43 in England’s first innings, scored a century and took five wickets for the third time in the same Test. India scored 286 runs in their second innings, with Ravichandran Ashwin slamming a century. The 34-year-old scored 106 runs off 148 deliveries. His knock also consisted of 14 fours and a six.