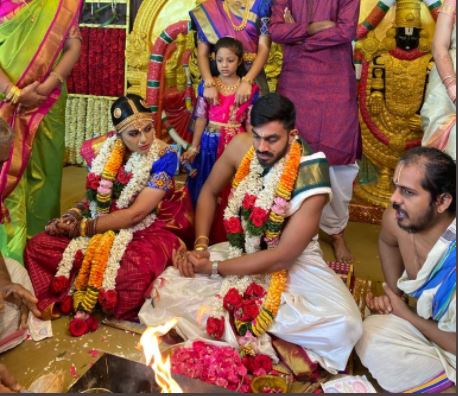 The all-rounder Vijay Shankar, who has so far represented India in 12 ODIs and 9 T20Is, married Vaishali Visweswaran in Chennai on January 28 (Thursday). He had made himself unavailable from the ongoing Syed Mushtaq Ali Trophy 2021 to attend his marriage.

On the occasion, Shankar’s current Indian Premier League (IPL) franchise Sunrisers Hyderabad (SRH) wished him a “happy and blessed married life.” SRH also shared a picture in which the cricketer and his wife can be seen taking part in a traditional ceremony in the presence of close family members and relatives.

Sending our best wishes to @vijayshankar260 on this very special day!

Last year in August, Vijay Shankar had shared the photos of his engagement with Vaishali.

Meanwhile, Vijay Shankar played only one league stage match for Tamil Nady in the Syed Mushtaq Ali Trophy that too against Jharkhand. Tamil Nadu has entered the semi-final which will be played against Rajasthan at Motera Stadium in Ahmedabad.

The fast bowling allrounder is now likely to feature in the Indian Premier League (IPL) 2021 for SunRisers Hyderabad. In the last edition, he played seven matches in which he scored 97 runs at an average of 101.04 while also picked four wickets in the tournament. His best in that season came against Rajasthan Royals.

Shankar came up with a superb bowling performance as he dismissed Rajasthan Royals star Jos Buttler (9) and conceded just 15 runs from three overs. Talking about his batting, he was promoted to number four and reposed the team management’s faith in him with his first half-century since 2018.

Vijay Shankar got sidelined from Team India’s squad after he surfaced injury during the World Cup 2019. He was called as the replacement in the tournament. Unfortunately, he was replaced because of an injury.