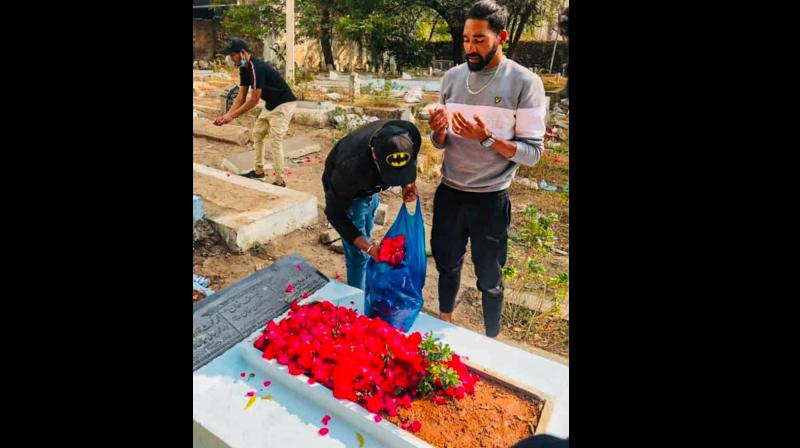 An emotional Mohammed Siraj drove straight from the airport to the graveyard and paid his last respects to his father Mohammed Ghouse, on his return to Hyderabad on Thursday from a successful tour of Australia with the national cricket team.

Mohammed Ghouse, who had wanted to see his son play at the highest level for India, had died on November 20 last year, about a week after the fast bowler landed in Australia with the Indian team. Siraj was advised by family members to stay back with the team and play on, as his father would have wanted.

He did, and played a key role in India’s historic series win, taking 13 wickets — the most by an Indian bowler —  in three Tests, including a five-wicket haul in the fourth and final game in Brisbane.

Siraj laid flowers at his father’s grave and offered prayers before heading for his home in Toli Chowki.

Later, speaking to reporters at his residence, the 26-year-old said he had pointed to the sky after taking 5 for 73 at the Gabba to honour his father. “I wanted to dedicate my performance to my Dad. I miss him a lot… at times I almost reached out to my phone to call him but realised he is no more,” he said.

Siraj also recalled the support he received from his family members. “They have been of huge help. My friends too were there for me when I needed them,” he said.

Help was also readily available on the field. Senior pace partner Jasprit “Bumrah bhai supported me a lot and kept giving me constant tips with regard to bowling as well as mental framework during the series,” Siraj recalled.

Then there was “Virat Kohli bhai who backed me while I was playing white ball cricket. As you know the chances for bowlers are rare in T20s and the 2018 IPL was a bad season for me, but he kept encouraging me. At the IPL last year, I got to learn quite a bit from Dale Steyn (Royal Challengers Bangalore’s South African pacer). All these players have contributed to my career,” he said.

“Then there are the fans who keep egging me on. I thank them too for all their good wishes,” Siraj added.

There’s no substitute for hardwork, Siraj says. “I worked hard during the lockdown as well. This was an important season for me and it turned out well,” he said.
Speaking about competition at the highest level, Siraj said: “There was pressure but I just wanted to go out and give my best. It’s time to relax now, only a bit though. For I will continue to work hard as I want to keep playing for the country as long as I can.”

Siraj and Jasprit Bumrah faced racial abuse from the spectators during the third Test in Sydney, forcing the Indian team management to lodge an official complaint with the match referee. “Those chants from the crowd made me mentally strong. The case is going on, let’s see whether I get justice or not. My job was to report the incident to the captain and I did. The on-field umpires offered us to leave the game but (captain Ajinkya) Rahane bhai said we won’t. We did no mistake, so we will play,” he explained.

Siraj refused to be drawn into the captaincy comparision between Kohli and Rahane. “Both are good captains,” he said.

The pacer picked the dismissal of Marnus Labuschange in the second innings of fourth Test first in Brisbane as his favourite. “It was important at that point of the game, he had scored a century in the first innings,” Siraj said.

With big exploits already, Siraj served a warning to opponents: “I want to keep performing, will continue to bowl my heart out.”