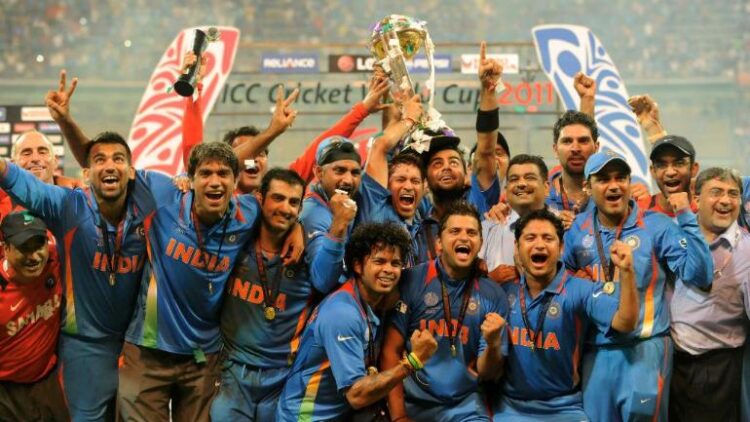 On this day 10 years ago team India created history and won the 2011 world cup at the Wankhade Stadium in Mumbai. Indian cricketers on Twitter honoured the 10th anniversary of the famous 2011 world cup win a day that is forever etched in minds of every Indian cricket team fan. It was a complete team effort from the men in blue in the final against a strong Sri Lanka side. From Virender Sehwag, Suresh Raina to Harbhajan Singh and Yuvraj Singh all once again remembered the iconic 2011 world cup win and shared memorable stories with all their fans on Twitter.

Talking about the world cup victory it is remembered for an outstanding opening spell of Zaheer Khan, the gritty 97 of Gautam Gambhir and the 91* of captain MS Dhoni who on the big day led from the front and took India home. After 28 long years, India won the 2011 cricket world cup and the entire team dedicated the win to the legendary Sachin Tendulkar who was playing in his last world cup. Tendulkar was the highest run-scorer for India in the tournament as he fittingly won the world cup in the twilight of his career in his home town in Mumbai.

The 2011 world cup win heroes were hailed by all the fans on Twitter as the win gave satisfaction to Indians all around the world. On this day 10 years ago MS Dhoni sealed the world cup win with a six, a shot which arguably the most important shot played in Indian cricket history. Throughout the tournament, all Indian players chipped in and fulfilled their roles under pressure whether it be the 2 crucial knocks of Suresh Raina in the quarter-finals and semis or Virat Kohli’s 35 in the final when India lost Sachin and Sehwag early in the innings.

Here are all the reactions on Twitter of Indian cricketers who were part of the side that won the 2011 world cup in Mumbai.

“April 2, 2011 – a day when history was created! We wanted to win the WC for India & for the master Sachin Tendulkar, who carried the nation’s expectations over decades! Indebted to be able to represent India & bring glory to our nation”, tweeted Man of the 2011 world cup Yuvraj Singh.

April 2, 2011 – a day when history was created! We wanted to win the WC for India & for the master @sachin_rt who carried the nation’s expectations over decades!

#10years of winning the World Cup, fulfilling the dream of every Indian around the world. It’s such a nostalgic feeling where I can relive each moment of lifting the trophy & making our country proud. It will be cherished forever. #Worldcup2011 #IndianCricketTeam @BCCI 🇮🇳 pic.twitter.com/IFOttlXbUr

It’s been 10 years but there are many memories still afresh. 2011 World Cup win – The golden moment which always will stay close to my heart. What a night it was for one billion Indian fans! pic.twitter.com/UCi25KVbti

April 2: 10 years ago , the moment of a lifetime. #TeamIndia 🇮🇳 pic.twitter.com/mhicAPqDL2

A day that will always be etched in the memory of every Indian cricket lover. Well done guys ! #WorldCup2011 https://t.co/q9Fwune8jo