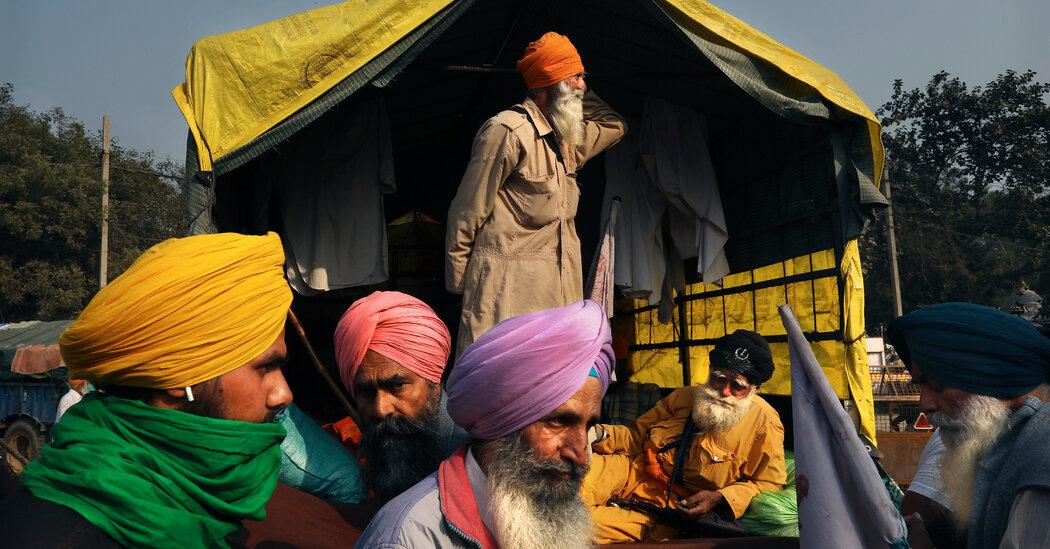 NEW DELHI — Before India’s farmers rose up in anger, presenting an increasingly difficult challenge to a government already grappling with the coronavirus outbreak and a devastating economic slump, Devinder Singh set his field on fire.

Mr. Singh would have preferred to clear his rice field. A 41-year-old farmer in the parched region of Punjab, he knew that setting piles of field waste on fire after harvest contributes to the pollution that often chokes New Delhi and the rest of northern India.

But he is one of thousands of farmers in an increasingly nationwide pushback against Prime Minister Narendra Modi’s proposal to overhaul the way many of the country’s 146 million farms do business. Mr. Modi has said that his market-oriented reform would free them from the constraints of a state-run system.

Many Indian farmers believe the overhaul will lead to lower prices and pave the way for corporate takeovers of their small farms, which average less than three acres in size. Farmer protests that began choking the roads to New Delhi last week have spread, intensifying pressure on Mr. Modi’s government to strike a deal.

Mr. Singh, who joined the protests outside New Delhi, was also incensed by a new, pollution-focused government ordinance prescribing prison, a fine of up to 10 million rupees (about $135,000) or both for burning crop residue. So last month, when it came time to clear his field for the winter wheat season, he burned the rice straw instead.

“Most of the farmers, we have tried not to burn, but we wanted to show our resentment,” said Mr. Singh, who works a 17-acre farm in the Firozpur district of Punjab. “If you impose on us, we will burn it.”

Their defiance may be worsening problems in New Delhi. Deaths from the coronavirus are rising as the Indian capital grapples with a third wave of infections, exacerbated by worsening air pollution. Some experts say fires from angry farmers are contributing to the pollution. The government disputes the theory.

The two sides are set to resume talks on Saturday. While officials have said they will not give in and repeal the laws, they could compromise on one of the farmers’ demands: enshrining minimum prices for some crops into law.

In the meantime, the protests have spread beyond New Delhi. Farmers marched and waved banners in the southern states of Kerala and Karnataka and in the northeastern state of Assam. Sugar cane farmers in Uttar Pradesh, who would be less affected by the farm overhaul, set up a protest camp in solidarity, clogging a central artery on the state’s border with Delhi.

Farmers represent a powerful political constituency for Mr. Modi and his Bharatiya Janata Party. Farmers could also be important for bringing India out of its debilitating, coronavirus-driven recession. Agriculture has been a rare bright spot, with farmers continuing to purchase consumer goods and offering income for people who lost their jobs after Mr. Modi locked down the country to stop the pandemic earlier this year.

Outside New Delhi, protesters were settling in for a long wait.

At the village of Singhu, on the border between the territory of Delhi and the state of Haryana, protesters blocked several miles of highway. On a recent visit, they were cooking and serving food on long mats, spread on the ground in the style of Sikh temple kitchens, and sleeping on hay in tractor-trailers covered with canvas tarps. An armed barricade blocked the road to New Delhi.

Harjinder Singh, a wheat and cotton farmer in Gujarat, Mr. Modi’s home state, traveled more than 600 miles to join the protest. He said that farming had become untenable in Gujarat because farmers had no access to a state-run market that subsidizes their crops.

“I’ve got 100 acres there,” he said, “and now I’ve turned it into barren land because of the government’s rude policies.”

Angry farmers could make their worries felt beyond the protests.

After enjoying some of its cleanest air in memory during the lockdown, New Delhi has recorded day after day of catastrophically bad air. Pollution in the capital surges near the end of every year, as cold winds sweep down from the Himalayas and people try to keep warm, but the elevated levels amid the outbreak have prompted questions.

Farmers traditionally play a role in the annual pollution. Many set fire to large swaths of land to clear fields ahead of the winter wheat sowing season, a practice known as stubble burning. Farm fires have been estimated to contribute between 2 and 40 percent of Delhi’s air pollution during the period.

Experts say this year’s pollution levels could be blamed in part on displaced laborers returning to farms, resulting in more cultivating. Satellite data has registered the worst farm fires in four years. “Farm production is at a record level,” said Panwar Sudhir, a life sciences professor of zoology at the University of Lucknow who follows farming issues.

But Mr. Sudhir and other experts said farmers may be ignoring official threats and inducements to curb stubble burning as a way to protest. State authorities have long worked to discourage the practice, including offering the use of stubble-clearing tractors and paying farmers not to burn.

“What farmers were saying was if we are protesting, and you don’t listen to us, then we will burn the stubble,” said Ramandeep Singh Mann, an engineer turned farmers’ activist in Punjab.

Government officials dispute the idea of a direct connection.

“The farming laws have nothing to do with this pollution impact,” said Prakash Javadekar, India’s minister for the environment, adding that farmers will stop burning when they have a less costly alternative — a goal that the government wants to help them find.

“There will be more solutions in the offing,” he said.

Whatever the cause, the rise in pollution has been deadly as the coronavirus has made its way through New Delhi. Delhi has witnessed record daily infection numbers and its highest death toll since the pandemic began, registering 2,612 deaths in November.

The pollution makes it harder for coronavirus victims, like Ritesh Agrawal’s diabetic mother, to breathe. Last month, after she said she was struggling to breathe, Mr. Agrawal immediately took her to be tested for Covid-19.

She tested positive, and doctors advised home isolation. But within hours of returning home, her oxygen levels plummeted.

Mr. Agrawal, a 41-year-old businessman in Delhi, said his mother died after being turned away from one hospital after another.

“I have money and connections,” Mr. Agrawal said. “But even that did not help.”

The Indian government has made fixing New Delhi’s pollution a priority. Mr. Javadekar said that the government has purchased a fleet of electric buses, expanded metro rail service and imposed steeper emission standards on personal cars. It has also pushed sooty refinery work outside the city limits. It monitors pollution levels from more than 3,000 industrial plants and notifies plant managers by text message when emissions exceed federal limits.

At the camp in Singhu, many of the farmers said they had no choice but to burn their waste. Many of the farmers from Punjab are Sikhs. For hundreds of years, males in that community have used the surname Singh to show their common bond.

That community is under threat, said Navdeep Singh, 30, a seventh-generation farmer from Amritsar in Punjab. Times are hard, he said, and government efforts like making tractors available are ultimately still too expensive.

“We are forced to burn,” Mr. Singh said, as he shelled peas for one of the demonstration camp’s free kitchens. “The government hasn’t really helped us with any other way to dispose of it.”