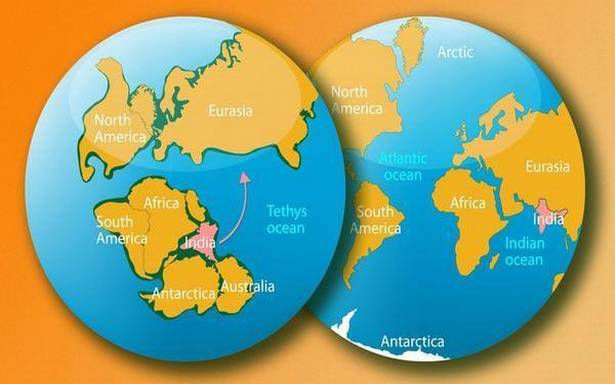 About 180 million years ago, India separated from the ancient supercontinent Gondwana and took a long northward journey of about 9,000 km to join Eurasia. During this journey, the subcontinent moved from the southern hemisphere, crossed the Equator to reach its current position in the northern hemisphere. Due to these changing latitudes, it experienced different climatic conditions, and a new study has now tried to map these climatic variations using leaf fossils.

“The evolution of the monsoonal climate in India is still debatable and not fully understood. Though recent data indicates that the monsoon system we experience now dates back to about 25 million years, it is still unclear how the climate was during its long voyage,” says Gaurav Srivastava from Birbal Sahni Institute of Palaeosciences, Lucknow, corresponding author of the paper recently published in Gondwana Research.

The team analysed the morphological characters of fossil leaves collected from Deccan Volcanic Province, East Garo Hills of Meghalaya, Gurha mine in Rajasthan and Makum Coalfield in Assam. The four fossil assemblages were found to be from four different geological ages and helped to study the climate during 65, 57, 54, and 25 million years ago respectively. “It has been observed from across the globe that plant leaf morphological characters such as apex, base and shape are ecologically tuned with the prevailing climatic conditions to adapt for all the seasons throughout the year. We applied this model to characterise the past monsoon from fossil leaves,” explains Dr. Srivastava.

The results indicated that the fossil leaves from India were adapted to an Australian type of monsoon and not the current Indian monsoon system during its voyage. The reconstructed temperature data show that the climate was warm (tropical to subtropical) at all the studied fossil sites with temperatures varying from 16.3–21.3 degrees C. All the fossil sites experienced high rainfall, which varied from 191.6 cm to 232 cm.

Dr. Srivastava explains that since India was the only subcontinent to have crossed from the southern hemisphere to the northern hemisphere, it is a laboratory to study biogeo changes and understand how the flora and fauna changed accordingly.