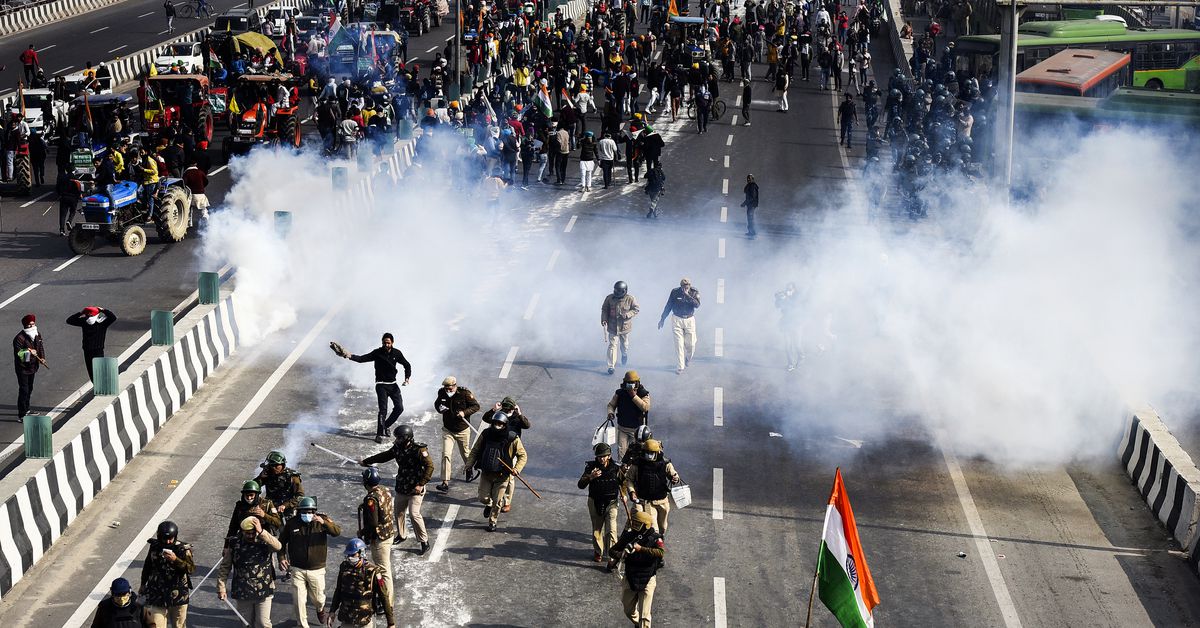 Violence erupted across India’s capital city of New Delhi on Tuesday when thousands of farmers protesting the government’s agricultural reform bills rode tractors past police barriers and clashed with officers.

Farmer’s unions had devised a plan for a peaceful march into the capital on Republic Day, which commemorates the signing of India’s constitution. The Indian government had approved a plan for the farmers — who have been protesting for months — to enter the city at noon. But the farmers’ plans went awry when some protesters began marching toward the capital a few hours ahead of schedule, resulting in a face-off with police, who used tear gas and batons to try to turn them back.

As the farmers abandoned approved routes, fierce battles broke out across the city. One farmer was crushed when his tractor was among the many vehicles overturned in the melee. Reports indicate that at least 19 people involved in the clashes were sent to two New Delhi hospitals. According to police, at least 86 officers were also injured.

In a statement, Eish Singal of the New Delhi police said the protesters broke the agreements made before the rally. “The farmers began tractor rally before the scheduled time, they also resorted to violence and vandalism.”

The farmers, many of whom are Sikhs from India’s Punjab and Haryana states, also entered New Delhi’s historic Red Fort and raised the Nishan Sahib, a flag of importance to India’s Sikh communities.

The Joint Farmers’ Front, which represents a number of Indian farmers unions, issued a statement Tuesday condemning the clashes and separating themselves from protesters who engaged in violence. “We condemn and regret the undesirable and unacceptable events that have taken place today and dissociate ourselves from those indulging in such acts,” the statement read.

The statement also said that the unions had made efforts to keep the events peaceful but “some organizations and individuals have violated the route and indulged in condemnable acts.”

Chief Minister Amarinder Singh, who represents Punjab, where many of the farmers are from, wrote on Twitter that the violence was “unacceptable” and urged “all genuine farmers to vacate Delhi and return to the borders,” referring to the areas on the outskirts of Delhi where the farmers have been camped for weeks in protest.

Why the farmers are still protesting

Thousands of farmers have been blocking several roads into new Delhi for more than two months demanding the repeal of three laws Indian Prime Minister Narendra Modi’s Bharatiya Janata Party passed in September as a part of a plan to make India a $5 trillion economy by 2024.

The laws, which some experts say are necessary to modernize India’s economy, remove longstanding restrictions on how and where produce is sold. Farmers who used to sell their produce at government-sanctioned markets called mandis are now able to sell wherever they please.

But the farmers are worried that the reforms will leave them at the mercy of large corporations that will buy their crops for low prices, leading to their financial ruin.

In response to the months of protests that have left dozens of farmers dead, the Indian government has offered to suspend the laws for 18 months. However, the farmers unions have refused to end their protest until there is a full retraction of the laws.

After an 11th round of talks ended without a resolution on January 22, the farmers decided to increase agitation of Modi’s government by riding tractors into the capital city during the Republic Day celebrations.

The farmers have planned a march on foot to the parliament building on February 1 as the government determines its budget.