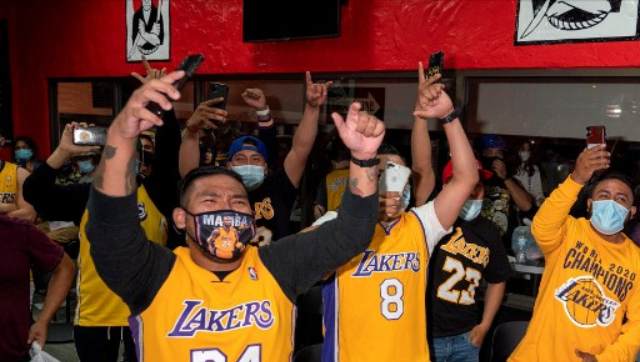 News of the updated guidelines was welcomed by California sports teams, who have played in empty indoor arenas since the pandemic began.

Los Angeles: Sports fans will be allowed to return to indoor arenas in California later this month under new guidelines announced by state authorities on Friday as the COVID-19 situation improves.

The California Department of Public Health said new rules would take effect from 15 April and were a result of increased vaccination rates and COVID-19 test positivity rates at a near-record low.

The updated rules include gatherings, private events or meetings such as receptions or conferences, and indoor seated live events and performances.

“Today’s update … is a result of the progress we are making both in vaccinations and in controlling the spread of COVID-19 ,” said Mark Ghaly, secretary of the California Health and Human Services Agency.

“By following public health guidelines such as wearing masks and getting vaccinated when eligible, we can resume additional activities as we take steps to reduce risk.”

How many fans allowed back into arenas would depend on the COVID-19 situation in a given county. California applies a system of four coloured tiers to each county based on the number of COVID-19 cases.

News of the updated guidelines was welcomed by California sports teams, who have played in empty indoor arenas since the pandemic began.

“We are incredibly excited that the State of California announced guidelines today that will allow Lakers fans to return to the Staples Center,” the Los Angeles Lakers said.

“Now that we have the guidance, we will work with LA County Public Health and Staples Center to finalize our plans to have fans safely attend our games starting with the Lakers vs Celtics game on April 15.”

The Los Angeles Clippers meanwhile said the team would welcome back fans for home games from 18 April.

“Can’t wait to see you, #ClipperNation,” the team tweeted.

A statement from the Golden State Warriors and Chase Center in response to the State of California’s announcement regarding indoor live events. pic.twitter.com/aiBGl11xqz

The Golden State Warriors said the team was “extremely encouraged” by the state guidance, but did not give a date of when fans would return.