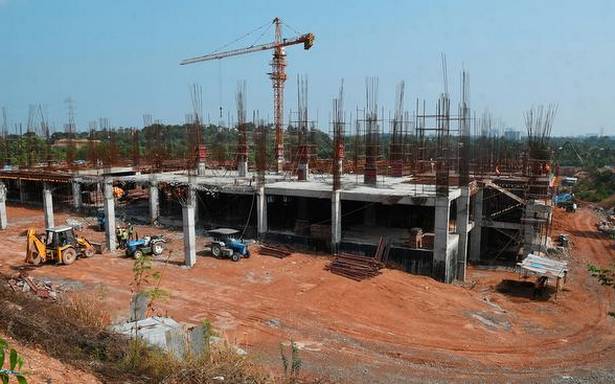 Moni Kuriakose, director, CCRC, said the decision was taken after it was found that work was not progressing at the site.

“Between May and December, only 1.6% of the work was done. At this rate, the work will not be completed on time. A decision on whether the contract will be cancelled is yet to be taken,” he said.

An official representing the contractor said the company was yet to receive an official stop memo, but was informed that they would have to vacate the site by Monday.

“A section of the building under construction collapsed last year, after which problems pertaining to the quality of work were rectified. Construction has been progressing after pandemic-induced delays and work was to be completed in six or seven months,” he said.

The revised deadline for the completion of the first two blocks was February 2021, but the lockdown had delayed the work, he added.

In November, KIIFB’s technical inspection authority had pointed out poor quality of work at the site. INKEL was then directed to step up the pace of work and rectify quality issues, said a post on KIIFB’s Facebook page. Failure to comply with these directives prompted the stop memo.

KIIFB, which is funding the project, had halted the work briefly last year after the building collapse. A meeting of officials from KIIFB, INKEL and CCRC was convened earlier this month to evaluate the progress of work. The construction of the building had commenced in July 2018, but only around 34% of the work has been completed so far.

The CCRC functioned out of the Government Medical College Hospital before the pandemic. With the MCH turning into a COVID care centre, the cancer centre was shifted to the General Hospital and surgeries were conducted at the Indira Gandhi Cooperative Hospital. The new complex is a long-awaited exclusive facility for cancer care in the district.