Home EntertainmentBollywood Inside Twinkle Khanna’s birthday bash, with more cakes than you can count. See pics shared by Karan Kapadia

Inside Twinkle Khanna’s birthday bash, with more cakes than you can count. See pics shared by Karan Kapadia 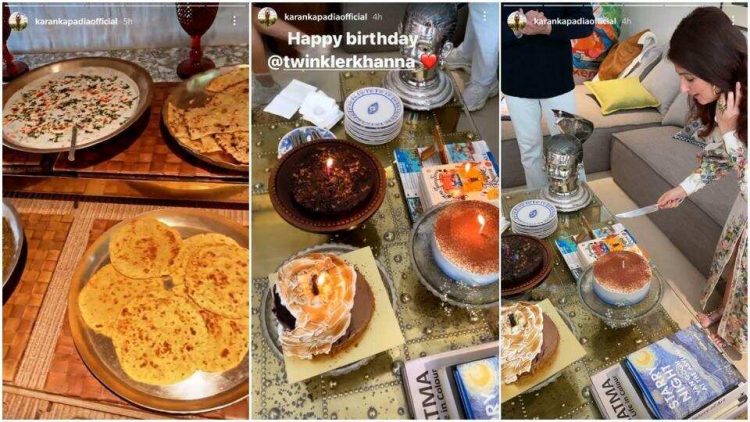 Actor Karan Kapadia has shared pictures and videos from his cousin Twinkle Khanna’s birthday party on Tuesday. Twinkle, a writer known for her humour books and columns, turned 47.

Karan took to Instagram to share several glimpses of the party, which included videos of the food, and of Twinkle cutting one of her several birthday cakes. In a separate post, sharing a picture of the two of them together, Karan wrote, “Happppy birthdayyyy @twinklerkhanna , love youuuu.”

Karan is the son of Dimple’s aunt, Simple Kapadia. He was recently seen in the horror film Durgamati, starring Bhumi Pednekar and Arshad Warsi. He made his film debut with 2009’s Blank. Recently, Karan and Dimple both expressed their pride at Twinkle’s mother, Dimple Kapadia’s performance in Christopher Nolan’s Tenet. Karan wrote in a social media post, “Even after 47 years in the business, you still continue to raise the bar, you deserve everything and way more. You’re an inspiration, a phenomenal actor and an even better human being. I love you.”

Earlier on Tuesday, Twinkle’s husband, actor Akshay Kumar, had also shared a social media post on the occasion. Sharing a picture of the two of them on a bicycle ride together, he’d written, “Here’s to another year of questionable life decisions. But I’m so glad I get to make all of them with you. Happy birthday Tina.” The couple has two children, son Aarav and daughter Nitara.

Twinkle, who shares her birthday with her father, the late screen legend Rajesh Khanna, wrote a heartfelt post in his honour, and shared an old picture of them together. “He told my mother that I was the best present she could have ever given him as I entered the world, feet first, on his 31st birthday. He called me Tina Baba, never baby, and though I didn’t realise it at that point, my upbringing was different from all the other young girls around me,” she wrote.