Home EntertainmentBollywood Inside Video: Sara Ali Khan introduces us to the hottest nurse ever- Varun Dhawan

Inside Video: Sara Ali Khan introduces us to the hottest nurse ever- Varun Dhawan 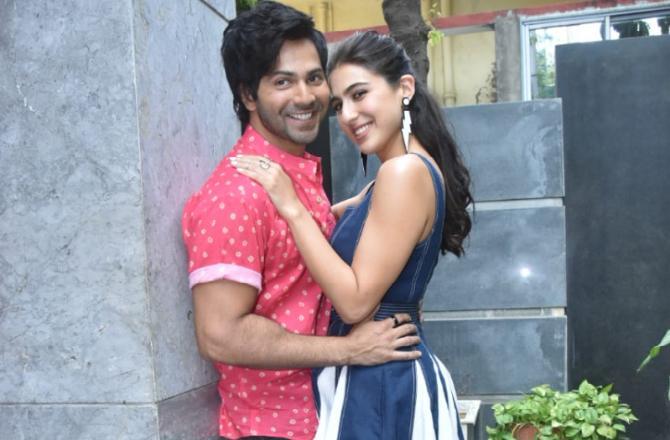 Sara Ali Khan and Varun Dhawan are gearing up for the release of Coolie No. 1 on Amazon Prime Video India on December 25. This marks the 45th film of veteran filmmaker David Dhawan. For the uninitiated, this is the remake of the 1995 blockbuster of the same name that starred Govinda and Karisma Kapoor.

Sara recently shared a video on her Instagram account and introduced the world to the hottest nurse ever and it was none other than Varun Dhawan. The actor impersonates a nurse in the climax of the film, akin to how Govinda did in the OG comedy. The conversation that happens between the actors in the video shouldn’t be missed.

In one of her recent interviews, when asked about the Govinda comedy, the actress said, “My brother [Ibrahim] and his friends haven’t watched the original. Dhanush sir, my Atrangi Re co-star, doesn’t know much about Hindi films. But almost everyone in India knows about the song, Main toh raste se jaa raha tha,” adding that stepping into Karisma Kapoor’s shoes was a tall order. “Govinda and Karisma are institutions in themselves; one shouldn’t even try to copy them.”

In the 25 years since the original hit the screens, movies have gone beyond being mindless entertainers. Today, the film’s plot – a porter duping his ladylove by concealing his true identity – can be viewed as deeply problematic. However, Khan insists the Amazon Prime Video offering must be seen through the lens of humour.

“I’d urge people to watch the film with the honest intention with which it is told. There is a difference between what you say on Twitter, and what an entertaining comedy tries to say. If everybody [expects] everything to be politically correct, any scope of humour in our lives will be [lost]. Of course, you can’t be demeaning. Govinda sir duping Karisma to make her believe that he is not a coolie, is funny. It’s not about him cheating. Ultimately, he falls in love with her, and that’s what most of us look forward to in life.”

Talking about Varun Dhawan, he has his hands full with one film after another in the form of Jug Jugg Jeeyo, Bhediya, and Sriram Raghavan’s film based on the life of Arun Khetarpal. Jug Jugg Jeeyo is directed by Raj Mehta and also stars Anil Kapoor, Neetu Kapoor, and Kiara Advani. Bhediya is made by Stree and Bala fame Amar Kaushik and has Kriti Sanon as the female lead.

Coolie No. 1 is the actor’s third collaboration with his father, the earlier two being Main Tera Hero and Judwaa 2. He has also been a part of films like Student of the Year, Humpty Sharma Ki Dulhania, Badlapur, ABCD 2, Dishoom, Badrinath Ki Dulhania, October, and Sui Dhaaga- Made In India.