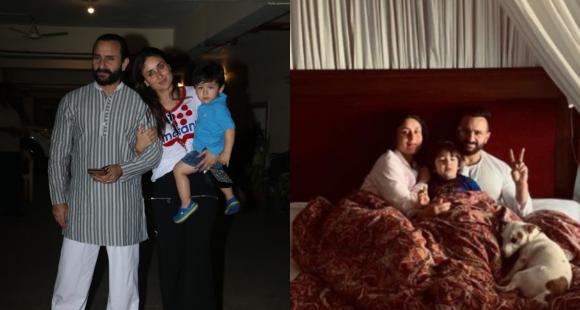 Kareena Kapoor Khan and Saif Ali Khan are all set to bid adieu to their old Fortune Heights home and move into their new dream house ahead of their second child’s arrival. Now, the designer Darshini Shah has spilled the beans about the new house and its facilities.

Just a few days back, Kareena Kapoor Khan joined her girl gang to celebrate at her house Fortune Heights and shared photos from their get together on social media. It turned out to be a celebration for Kareena and Saif Ali Khan”s new home with Taimur  Ali Khan. Now, details of Kareena and Saif’s new abode are out and looks like the soon-to-be parents have done it all to get their new house ready before the arrival of their second child. The designer, Darshini Shah, who has worked on Kareena and Saif’s new house has spoken to an online portal and revealed details of their home.

In a chat with Times Of India, Darshini revealed that like their old house, Bebo and Saif’s new abode also comes with a library, artworks, antiques, candles and more. The new house is apparently spread across 4 floors in a nearby building to Fortune Heights. The designer shared that Kareena and Saif have gotten it ready keeping in mind the requirements of the second child along with Taimur’s space. She said that the new house has feels of their old house too as they had gotten too comfortable with that home. Further, she shared that Kareena has been actively involved amid her pregnancy too in designing the new home.

Sharing details of the new house, Darshini revealed, “It has a beautiful new nursery for the baby, and Taimur’s own space as he’s growing up. It’s a lot larger than their old house; it’s more spacious with beautiful terraces, a swimming pool, outdoor areas, and open spaces that have been landscaped. It has room for everyone.” She shared that the new home will also reflect Kareena and Saif’s love for travelling. She said, “Both Saif and Kareena love understated luxury and comfort. They like their spaces to feel like their travel diaries. Everything that they have at home is something they have collected over time, and it has a memory or a story attached to it. Like, they love England, they like the colonial-classic style of decor.” Darshini, who had also designed their old home and was involved with the restoration of Pataudi Palace too, revealed that the new house was done up keeping in mind the timing of the second child’s arrival. She shared how Kareena has been picking up stuff amid her pregnancy for the new home too. Well, surely fans of the star are excited to see their new living space soon via Kareen’s Instagram posts. Not just this, a few days back, Kareena shared a photo while working with Darshini inside the new house and left fans excited.

The couple is expecting their second child reportedly in February-March 2021. Kareena has been spotted several times walking from one building to new the house building with plans in her hand too. The actress is keeping herself busy with the new house designing before the arrival of the second child.