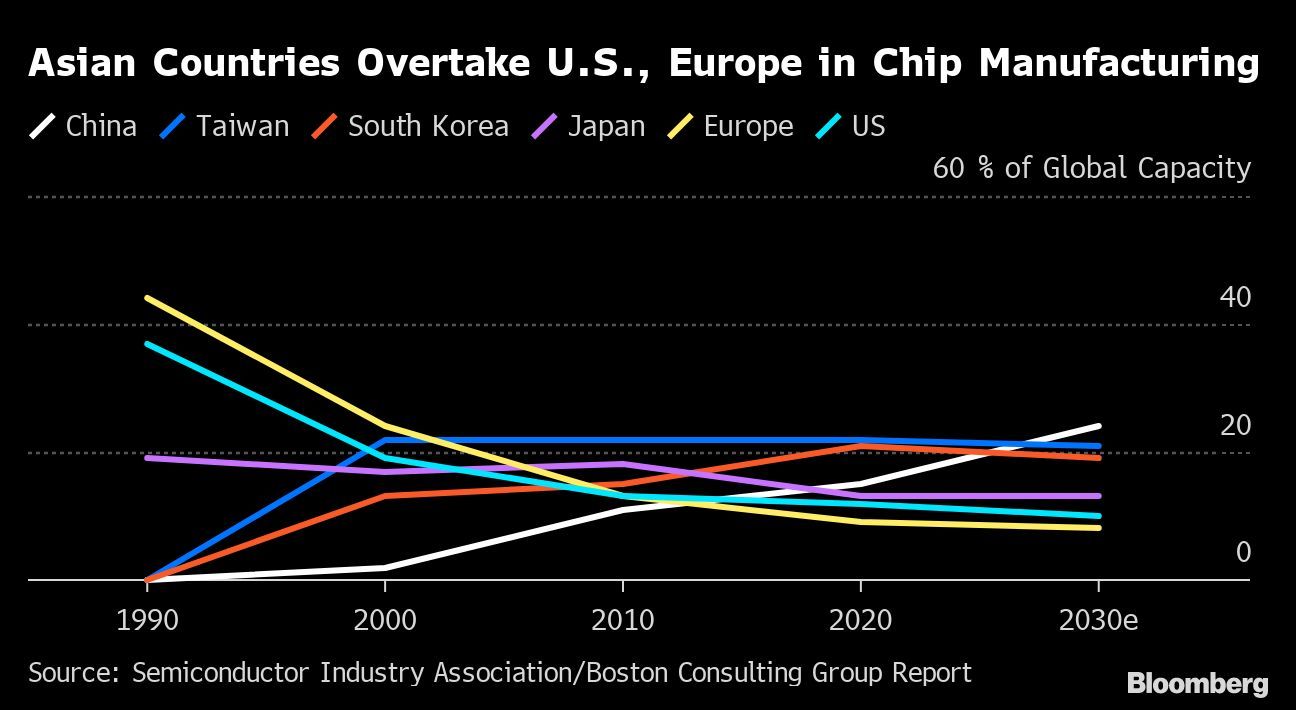 (Bloomberg) — Intel Corp.’s new Chief Executive Officer Pat Gelsinger wants the company to regain its former glory as the world’s leading chip manufacturer and he says it’s a strategic priority for the U.S.

That pits the industry veteran against investors and analysts who are hankering for quick results and think Intel’s bottom line takes precedence.

“This is a national asset. This company needs to be healthy for the technology industry, for technology in America,” Gelsinger told analysts late Thursday after pledging to keep most of Intel’s semiconductor production in-house. “It’s an opportunity to help and to unquestionably put Intel and the United States in the technology leadership position.”

The stock dropped 9% in New York Friday, its worst day since October, on concern a manufacturing turnaround will take years and cost billions of extra dollars. Some investors had advocated for Intel to outsource more production before Gelsinger revealed his hand.“Catching up is both a long shot and long journey,” Jefferies LLC analyst Mark Lipacis wrote in a note titled “U.S. Semi Manufacturing Crusade = No Quick Turnaround.”

Intel will struggle to live up to Gelsinger’s assertion that the company can catch and pass Taiwan Semiconductor Manufacturing Co., the current leader in chip production. However, his rallying cry resonates more with other audiences and may bring Intel allies in the new administration of U.S. President Joe Biden.

The chip industry is at the heart of a growing national rivalry between China and the U.S. China is the biggest consumer of semiconductors and the government there has vowed to spend more than $160 billion to create a domestic semiconductor sector. So far, though, it still relies heavily on U.S. chipmakers.That equation has become more complicated amid increasing scrutiny of the global technology supply chain. While many U.S. companies still design advanced chips, they have them made by TSMC in Taiwan.

Intel is one of the few remaining chip companies that supply themselves with leading manufacturing. And it still makes many chips in the U.S., with factories in Oregon, Arizona and New Mexico. These components power computers that run or design government encrypted communication, nuclear power plants, military hardware and banking systems.

If Intel outsourced production to TSMC — as some on Wall Street want — the U.S. would lose a major advanced manufacturing sector and hand more crucial know-how to Taiwan, a country China calls a rogue province that is only 100 miles off the coast of the mainland.

Some U.S. lawmakers have begun listening to Intel and other U.S. chip industry players who have argued for years that incentives to keep manufacturing in the country just aren’t enough compared with what’s offered in China and other parts of the world.

Last year, a bipartisan bill to provide $50 billion of incentives to build production in the U.S. was proposed. But to put that seemingly staggering amount of money into perspective, earlier this month TSMC said it’s planning to spend as much as $28 billion on new plants and equipment this year.

“What we’ve heard from the U.S. government is, we need access to advanced microelectronics technology and manufacturing here in the U.S.,” Intel’s outgoing CEO Bob Swan told analysts late Thursday. “We need a safe and secure supply chain increasingly here in the U.S.”

While improving its own manufacturing, Intel could develop a technology partnership with TSMC and other major operators of chip foundries. TSMC and Samsung Electronics Co. are either working on or considering new factories in the U.S.

“This type of a partnership could also leverage new U.S. tax credits for onshore manufacturing for further value creation,” Timothy Arcuri, an analyst at UBS, wrote in a note to investors on Friday.

Last year, Biden proposed a 10% “Made in America” tax credit covering projects such as increasing domestic production and retooling or expanding manufacturing facilities.Even U.S. government spending power won’t quickly fix Intel’s main problem: The sheer difficulty of making chips. The tiny squares of silicon are home to billions of tiny switches or transistors. Intel factories in Oregon, Arizona and New Mexico churn out millions of these semiconductors a month. But doing that reliably has become increasingly difficult and TSMC has forged ahead by gaining more experience as the biggest maker of smartphone chips.Semiconductors made using Intel’s latest production technology, called 7-nanometer, won’t arrive until 2023, executives said late Thursday. The TSMC equivalent has been used by Apple to mass produce chips for the iPhone for about a year already.“Even if Intel does successfully execute on 7-nanometer, they are still a node behind TSMC,” said Raymond James analyst Chris Caso. “And we don’t think Intel can deliver leadership products without leadership in transistors because it has never been done before. That keeps Intel behind the industry for four more years.”