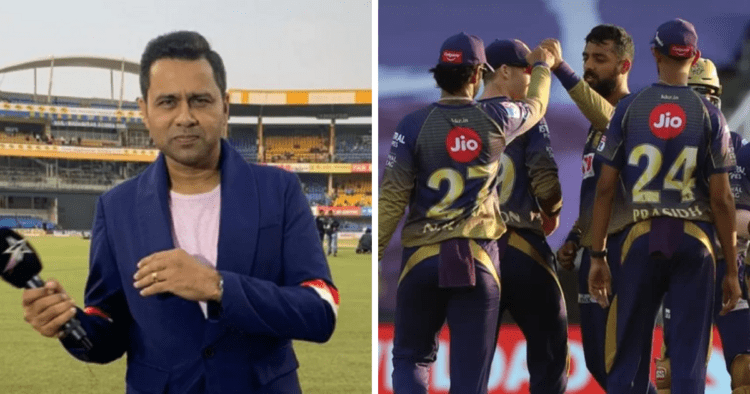 Days ahead of the 14h edition of the Indian Premier League (IPL), former cricketer Aakash Chopra has revealed his Kolkata Knight Riders playing XI. The Kolkata-based outfit, who bowed out of the group stages in IPL 2020 in the UAE will be desperate to add one more trophy to their tally of two titles they won in 2012 and 2014.

Chopra believes that young Shubman Gill should open the batting for KKR alongside Rahul Tripathi. While Aakash Chopra felt that Nitish Rana, who recently recovered from COVID-19, should occupy the No.3 slot, the likes of skipper Eoin Morgan and former captain Dinesh Karthik will come in at No.4 and No.5 respectively. Kolkata Knight Riders’ batting looks solid and can give many bowling attacks a run for their money in IPL 2021.

Going ahead, the popular commentator also felt that big-hitting West Indian all-rounder Andre Russell should bat at No.6, while Aussie paceman Pat Cummins should walk in at No.7.

“I will have Tripathi as an opener with Gill. I will keep Nitish Rana at No.3, Morgan at No.4 and Dinesh Karthik at No.5. This is your top five. Now you keep Andre Russell at No.6. If you keep him at No.6, the slight question will be whom will you bat at No.7. I would say try with Pat Cummins,” said Chopra on his YouTube Channel.

Speaking about the bowling attack, Aakash Chopra believes Prasidh Krishna, who recently made his international debut and off-spinner Varun Chakravarthy will positively start for Kolkata Knight Riders. The cricketer-turned-commentator feels that one out of Lockie Ferguson, Shakib Al Hasan, or Sunil Narine could be picked in the side depending on the conditions.

“If you keep Pat Cummins at No.7, you will have four proper bowlers after that. Varun Chakravarthy and Prasidh Krishna can be there in that. That makes it two. You have picked only three overseas. So, depending on the pitch you can pick an overseas fast bowler like Lockie Ferguson. You can also pick Sunil Narine or Shakib Al Hasan. You can also play Kuldeep Yadav,” said Chopra.