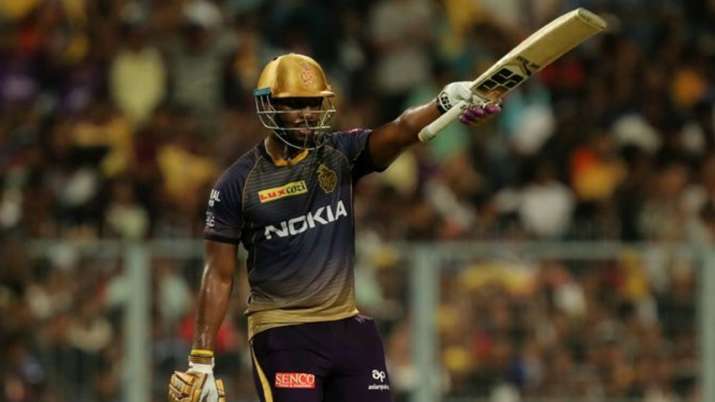 Former Kolkata Knight Riders (KKR) captain Dinesh Karthik was all praises for West Indies all-rounder Andre Russell’s batting in the IPL 2019. Russell was at his destructive best in the tournament, often bailing KKR out of troublesome situations and even winning matches from impossible situations.

Russell had joined the KKR team in 2014, the year in which they won the IPL for the second time, but had to wait for a couple of years to show why he is considered to be so special. In 2015 and 2018, Russell had decent outings for KKR, scoring over 300 runs in each season; however, it was in 2019 that Russell finally came into his elements, blasting 510 runs from 14 matches at a strike rate of 204.80.

Talking about his favorite innings from Andre Russell in an ESPNCricinfo video, Dinesh Karthik recounted his 13-ball 48* against Royal Challengers Bangalore in IPL 2019. RCB had set KKR a target of 206 to win the match at M Chinnaswamy Stadium in Bengaluru, thanks to amazing knocks from Virat Kohli and AB de Villiers, who scored half-centuries.

KKR did their best, but the equation came to 53 needed off 18 balls for Dinesh Karthik’s team to win the match. It was an impossible situation but for KKR, the positive was that Andre Russell was still at the crease.

“Andre Russell… in 2019 batted the best he’s ever batted in his career. Some of the innings he played, he single-handedly won the game for us. I very vividly remember one over when some bowler started it, and he got injured after one ball. Comes in Marcus Stoinis… my god, the way he hit Stoinis and that’s where things started. And then he took out Southee. These two overs and in a span of 10-11 balls, he hit six or five sixes, I’m not sure, completely changed the game,” Karthik said in a video on ESPNCricinfo.

Russell unleashed a fury hitting 7 sixes and 1 four in his knock of 13 balls, finishing with 48*, as KKR won the match by 5 wickets and astonishingly, with 5 balls in hand. Australian all-rounder Marcus Stoinis bowled three balls and got hit for six twice. Tim Southee gave 29 runs in the penultimate over as Russell ran wild.

“Till about 16 overs, which is about 36 overs of this game, RCB were all the way up and running. They were killing it. But just that point, in walks Andre Russell and the way he batted was just an absolute treat to watch him,” Karthik added.

IPL 2021: Andre Russell In 2019 Batted The Best He's Ever Batted In His Career, Says Dinesh Karthik