Home SportsIPL IPL 2021: Can Tewatia Do A Tewatia Again? 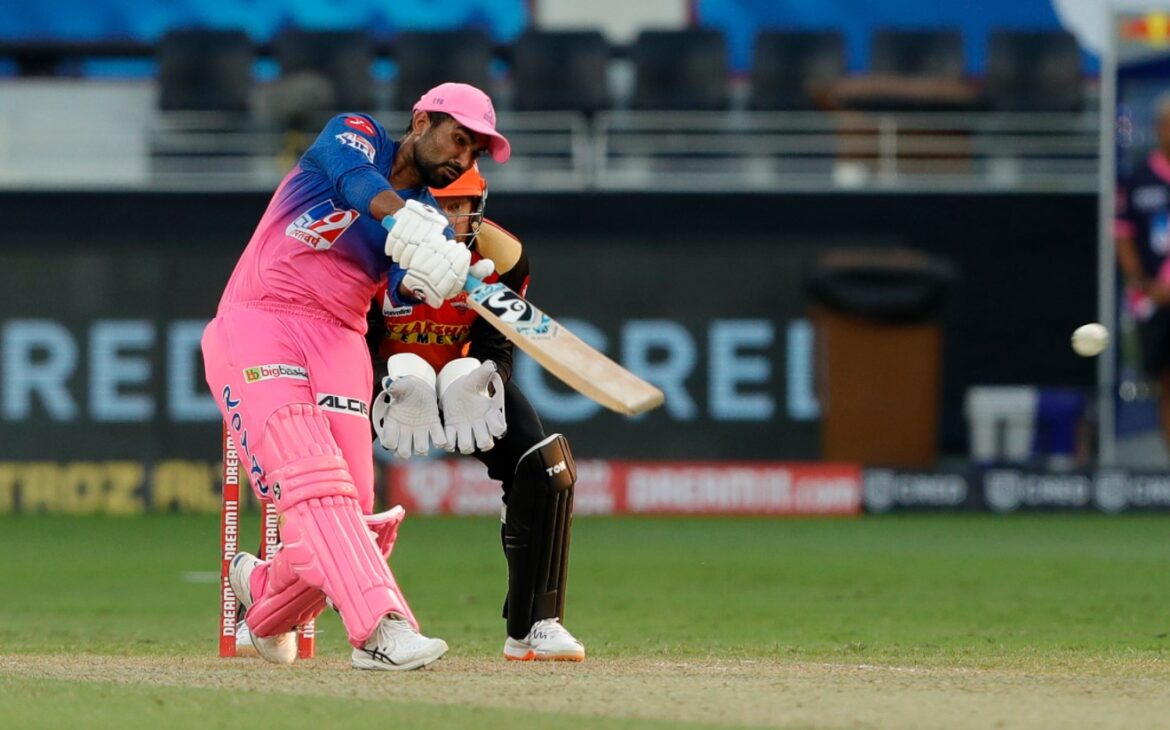 When Rahul Tewatia completed a rejuvenation act for the ages in an IPL 2020 match against Punjab Kings (PBKS) in Sharjah, the Rajasthan Royals (RR) spin all-rounder made people eat their words about his innings, and became an instant hero.

The magnificent end to Tewatia’s otherwise criticised innings, including five straight sixes off pacer Sheldon Cottrell, saw him emerge as an inspiration. Not just for his team but the fans out there seeking motivation from sporting action in their lives. In that sense, it was an ending more philosophical than remarkable.

Promoted up the order to do a job in a high-scoring run-chase, Tewatia couldn’t hit the ball off the square for the major part of his innings. But then he turned a corner for himself and ended with a match-winning 31-ball 53. His quick journey from a potential villain to a genuine hero was a lesson for us, the strugglers, to never lose hope and give up.

There was a feeling among the cynics, however, that Tewatia’s beautiful resurgence could prove a one-off such performance for the whole of IPL. As belligerent as he was with the bat in an over, Tewatia was facing a bowler incapable of nailing any of his yorkers under pressure, they mentioned.

Cricketing logic isn’t influenced by the emotion. It was felt that over a period of time, during a long IPL season, cricket will take tests of Tewatia that he wouldn’t have many answers for. And that, for a reason. Here is a cricketer who has never really managed to cement his place in a Haryana domestic state side and someone who has spent more time on benches than playing in IPL, pitted against the world’s best T20 bowlers and batsman for the best part of two months.

But Tewatia’s skill and temperament shone through as he proved his doubters wrong continuously to finish as one of RR’s few bright spots in IPL 2020. He scored 255 runs at a strike-rate of 139.34 and contributed 10 wickets with his handy leg-spin at an economy rate of 7.08. The left-hand batsman and right-arm leggie proved instrumental to multiple of RR’s wins in either department, providing explosiveness with his willow and control through the middle-overs with the ball.

Soon, Tewatia found himself selected for India’s T20I squad to face England – unimaginable at the start of the winter – in an act of encouragement from the selectors, who rewarded him for his consistent IPL performances. Tewatia is closer to playing a T20 World Cup than he ever thought he would be in his life.

However, as it happens in the cricketing world, a fresh season poses fresh question marks. Now, it’s about whether Tewatia can retain his success over multiple seasons of the IPL. Whether he can pull off a Tewatia again, with opponents having gotten a greater understanding of his game as a batsman and bowler?

Tewatia will be carrying a greater sense of anticipation around him and therefore, also the pressure to live up to the rise in expectations.

With that pressure on his head, RR will be hoping that their spin all-rounder can retain his success to another IPL campaign and help them reclaim the coveted crown.

The key for Tewatia on an individual level will be to shut down the outside noise. Because that’s what IPL’s most consistent performers have done over the years; they aren’t influenced by the outside talk, maintain their calm and composure, and train as hard after success as they do upon failing.

Tactically, it would make sense if teams are still slow to come to grips with what Tewatia has to offer against them, as an attacking left-hand batsman who is a four-over leg-spin bowler remains a rare commodity.

There’s a line of thinking that suggests, while Tewatia has had his stocks raised, RR should still let him fly under the radar a bit, employ him for roles where he isn’t overburdened with responsibility and use him with only the right match-ups in mind. That seems the best environment for a player of Tewatia’s kind to flourish, where he has more people to prove wrong than to prove right.

Also Read: Should Finn Allen Be One Of RCB’s Four Overseas Picks?