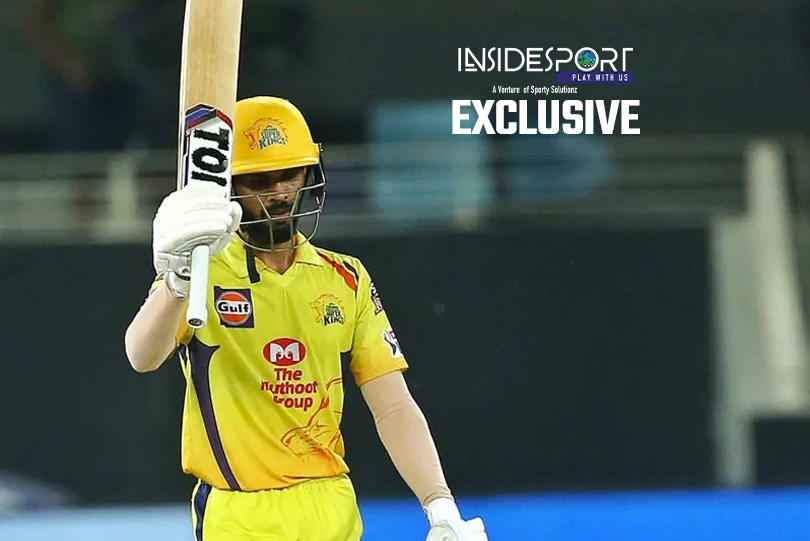 IPL 2021 – CSK’s Ruturaj Gaikwad: How many times did the exuberant Kevin Pietersen throw up a forceful one-liner that “The IPL is the greatest cricket academy in the world” during the 13th edition of the League  in the United Arab Emirates. Umpteen Times! The South African-born Pietersen is one of the most articulate commentators in the world and is one among the 15 England players who have played over 100 Test matches. He is well qualified to have made the telling statement that people of his ilk wouldn’t disagree with.

There is a high percentage of legendary players and icons who work with different franchises in the IPL and one among them is a top-quality Australian batsman known by his sobriquet “Mr. Cricket” . We are referring to Michael Hussey, who donned the Chennai Super Kings (CSK) bright yellows for many years and is a support staff member of the team, guiding players. One among them is Maharashtra’s Ruturaj Gaikwad.

The 24-year-old Ruturaj had a tough introduction to the high-intensity uproar of the League in the UAE, dismissed for 0, 5 and 5 before he stamped his class with a three-in-a row half-centuries as CSK’s presence in the 13th tournament came to a premature close.

When asked what was the conversation with head coach Stephen Fleming, Ruturaj revealed that “it was not much” and that he talked to Hussey many times.

Ruturaj said: “He (Hussey) came up to me before the last three games and counselled not to take any pressure and bat the way I do for Maharashtra. Right through the tournament and before the start of the tournament, we used to have deep conversations while watching a match on TV or on the ground. It was about how one can deal with particular situations. He used to share his experience and I would talk about how I would approach a particular situation. Then Hussey would come up with suggestions for me to apply in my approach and batting.”

Ruturaj Gaikwad on IPL 2020: ‘I was not used to batting in the middle-order’

The young Maharashtra right-hander scored 65 not out against RCB, 72 against KKR and 65 not out against KXIP to become  the first uncapped player (not played for India) to score three half-centuries in succession. A spectacular change in fortune after a poor run in his first three League matches.

Does he rue having missed opportunities in the absence of  Suresh Raina, who returned home before the start of the League, and Ambati Rayudu, who was injured, and does he regret dancing down the pitch to the Rajasthan Royals leg-spinner Rahul Tewatia in the first ball he faced in the League?

Ruturaj replied that he did not regret at all stepping out to the first ball he faced and the outcome of it (stumped by Sanju Samson). “Even now I don’t. I saw the dismissal two or three times. I was not used to batting in the middle-order. And whenever I had batted in the middle-order for my club, and when the run rate required was ten-plus an over, I showed signs of aggression. It may be like stepping out to a spinner or walking down the pitch to a fast bowler. It was just a habit when I used to go in that situation. I was disappointed getting out in the first ball. I knew I had made a mistake.”

Ruturaj has been in the senior national committee’s radar after his heavy scoring across all formats of the game. Each one of the selection committee members chaired by MSK Prasad travelled to the cities where a  select group of batsmen and bowlers played and one among this select few was Ruturaj. So far, he has amassed 1,349 runs in 21 first-class matches, 2,499 in 54 limited-over (50) matches and 1,141 in 39 Twenty20 matches.

Ruturaj Gaikwad: “Before playing the IPL, I used to rate the Ranji Trophy higher than the IPL.”

“I enjoy playing in all the three formats. Every format has its own challenges. In Ranji Trophy, you can take some time and take responsibility, which is different in the other two formats. In every format, there is responsibility on my shoulders, but I enjoy it. Ranji Trophy is a tournament where everybody is noticed and the word goes around about the good players. Before playing the IPL, I used to rate the Ranji Trophy and other BCCI tournaments higher than the IPL.”

Ruturaj Gaikwad: “Quality of bowling in IPL much stronger”

Having played a decent number of matches in the BCCI tournaments, Ruturaj has been able to discern the difference between the regular BCCI tournaments and the IPL. “The quality of opposition is much stronger in the IPL, wherein all the five or six bowlers would be good, whereas in the domestic tournaments you have to see off two or three good bowlers and target the others. In IPL,  the bowlers think differently tactically. Things change rapidly in IPL.“

The 13th IPL introduced Ruturaj to the world of cricket, in particular to the Indian fans, thanks to television. It was a mixed bag, but Ruturaj doesn’t believe he was denied more opportunities. “I was in the playing XI because Rayudu was injured. So I had to make way when he regained fitness and returned to play.”

Apart from Fleming, and to a large extent Hussey, Ruturaj also said captain MS Dhoni played his part in calming and encouraging him. “When I got out without scoring against MI and when I had a bad day with two misfields and a dropped catch, he (Dhoni) came up to me and advised to enjoy the game and play for the jersey. He told me to have a good time in the middle.”

Ruturaj is keen and eager to play for India. “I did not see much of the Australia-India series live, but saw the highlights. I could feel the fearlessness in the team and the young players. That’s what I have picked up from this national team. My ambition is to play for India. But as of now, the focus is on the BCCI domestic tournaments and the IPL,” trailed off Ruturaj, a product of the Thergaon (Pimpri-Chinchwad) based Dilip Vengsarkar Cricket Academy. “I started going there in 2008 and I still go there.”

Ruturaj has been retained by CSK for IPL Season 14.

G.Viswanath, has spent watching and reporting cricket in Mumbai for over four decades. Was with India’s leading national daily ‘The Hindu’ for 36 years and prior to that for three years with ‘sportsweek’. Has covered international cricket for ‘The Hindu’ in England, Australia, New Zealand, Pakistan, Sri Lanka, Bangladesh, Zimbabwe, South Africa, Canada, Singapore, Holland.