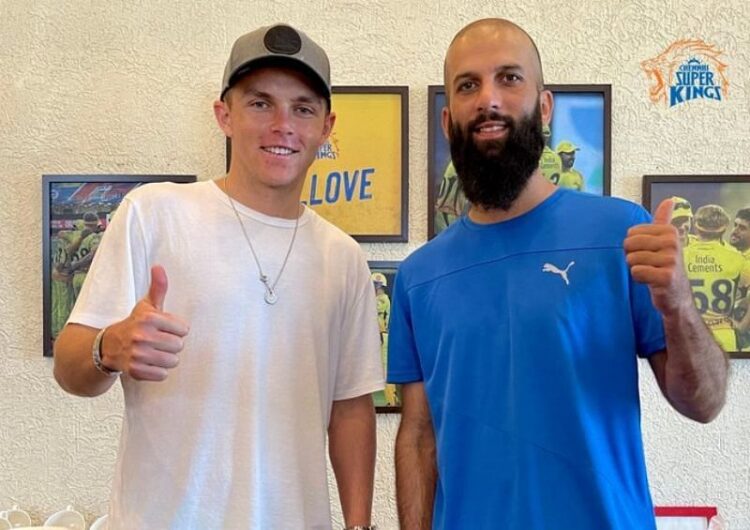 England all-rounders Sam Curran and Moeen Ali have joined their Indian Premier League (IPL) franchise Chennai Super Kings (CSK) ahead of the 2021 edition of the competition.

Both Sam Curran and Moeen Ali were part of the England team that faced India in the recently-concluded ODI series. England lost to India by seven runs in the deciding ODI of the three-match series in Pune on Sunday.

On their official social media account, CSK posted a picture of Sam Curran and Moeen Ali joining the franchise to prepare for IPL 2021. Along with the image, Chennai Super Kings included a smart caption which read:

While Sam Curran was retained by CSK ahead of the IPL 2021 auction, Moeen Ali was purchased for INR 7 crore.

Earlier in the day, the franchise posted a video of Robin Uthappa, Krishnappa Gowtham and Cheteshwar Pujara on their first day of training after they completed their quarantine.

Chennai Super Kings are one of the most successful franchises in the IPL, having won the T20 competition thrice. Only Mumbai Indians have won the IPL more times, doing so on five occasions.

Last season, though, CSK had a nightmarish run. They finished in seventh position with six wins and eight losses. That marked the first time Chennai Super Kings failed to qualify for the IPL playoffs.

Sam Curran nearly pulled off a miraculous win for England

A day ahead of joining his IPL franchise, Sam Curran proved why he is rated so highly. The left-hander scored a sensational unbeaten 95 off 83 balls to nearly pull off an unlikely win for England. The 22-year-old blasted nine fours and three sixes in his stupendous innings.

At 200 for 7 while chasing 330, England seemed dead and buried before Sam Curran brought the innings back to life. Although the visitors ended up losing the match by seven runs, the England all-rounder was named the ‘Man of the Match’ for his exceptional effort.

“We didn’t win the game but happy with the way I played. I haven’t done something like that for a while, especially for England. Disappointed with the finish. A massive learning curve for me but disappointed at the end. Again, it’s a learning series with the ball and feel like it has given me a lot of confidence for the IPL. Going straight there (CSK) for the IPL.”