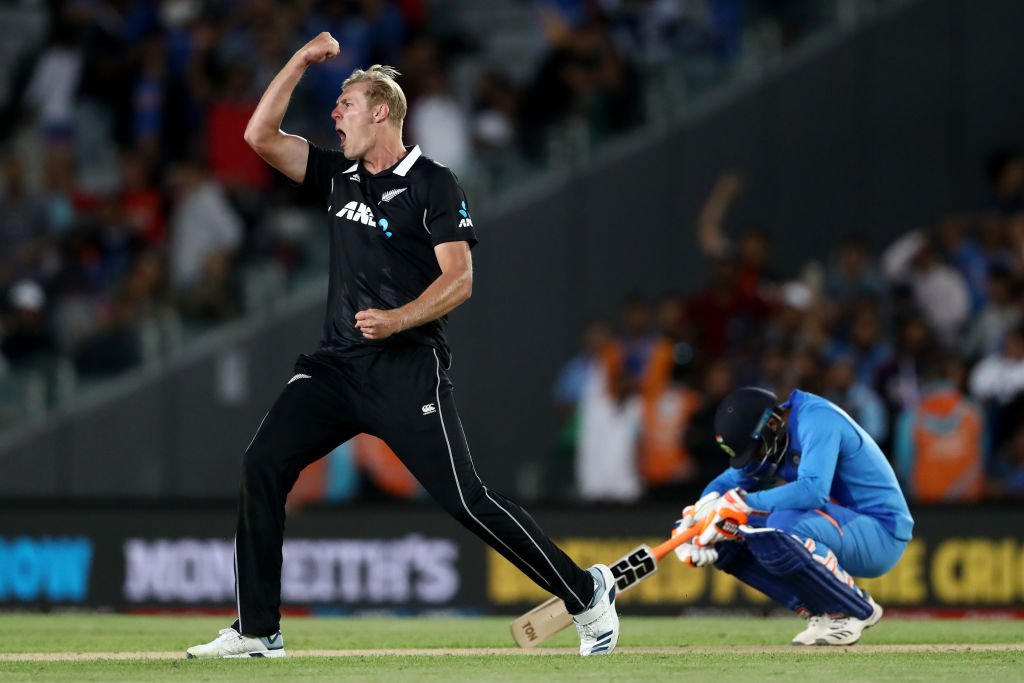 Kyle Jamieson’s struggles in the T20I series versus Australia aren’t a cause to be “too worried” for Royal Challengers Bangalore (RCB), said the franchise’s director of cricket operations, Mike Hesson.

Hesson backed his team’s INR 15 crore recruit from New Zealand ahead of the 14th edition of the Indian Premier League (IPL) despite having a poor series against the Aussies.

Jamieson has gone for 11.66 runs per and taken only one wicket in the first four games of the series but Hesson feels he’ll be better for the experience.

The double blow by Kyle Jamieson had India wobbling at Basin Reserve on day one.

“He’s struggled, probably for the first time in international cricket really, which I don’t think is a bad thing,” Hesson said in a conversation with Ian Smith for Sky Sports NZ.

“He’s battled to find his lengths, which when you’re put under pressure, that can happen. And pressure not only from the opposition but also the weight of expectations. For Kyle, I don’t think it’s a bad thing.”

“He’s a smart enough cricketer, surrounded by good people, and he’ll come out of the other side. When you look at a player, you don’t look at a player just over a very short period of time. You look at the characteristics that he’s got. He’s got some good fighting qualities.”

“He struggled, he didn’t find his lengths, he looked like he lost his run-up. We know he’s a very good player and although we would like him to be performing better, we’re not too worried just yet,” he added.

RELATED:  Aakash Chopra Predicts Mitchell Starc Can Emerge As Most Expensive Buy In IPL Ever

RCB bought Jamieson after winning a three-way bidding war also involving Punjab Kings (PBKS) and Delhi Capitals (DC). It was Hesson who placed the first bid on Jamieson at his base prize of INR 75 lakhs. Multiple bids thereafter from PBKS and later DC pushed the prize past 10 crores. The RCB, though, eventually got their man at INR 15 crores, making him the second-highest bid player of the recent auction.

Mike Hesson has been in India for quite a while now as he arrived in the country before the IPL 2021 auction in Chennai and has since shifted base to Bangalore where RCB are set to begin a camp soon.

The former New Zealand coach has also watched matches of the ongoing Vijay Hazare Trophy, of which a few games have been held in the city.

“I’ve been watching domestic cricket for the last week, one-day cricket in Bangalore,” Hesson said. “A lot of our players have been playing there, and we start a camp in two days’ time with six or seven guys who aren’t involved with India or international cricket.”

“We’d like to get the squad together in the early twenties of March when the final IPL dates get settled. There’ll likely be a five-seven-day quarantine period that people will have to go through, and then the tournament is set to start early to mid-April.”

RELATED:  Mustafizur Rahman ready to pull out of IPL for national duty