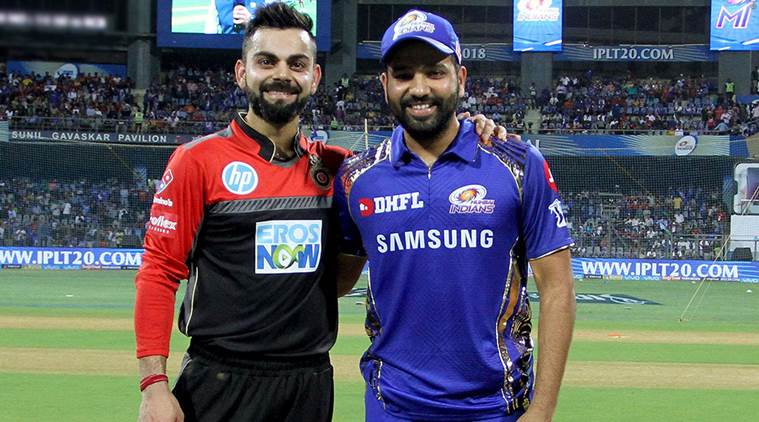 RCB vs MI: Mumbai Indians (MI) and Royal Challengers (RCB) are all set to play the tournament opener of IPL 2021 on April 9, in Chennai. They are two of the most glamorous sides in IPL history. However, both sides have had contrasting fortunes so far. Mumbai Indians have managed to win five titles, being the most successful IPL side, whereas, RCB are only one of three franchises to have not won the competition yet. The Challengers have reached the finals on three occasions in 2009, 2011 and 2016 but have never managed to cross the finishing hurdle.

The two sides have played out several memorable clashes against each other in the previous 13 editions. Mumbai Indians are led by Rohit Sharma, whereas, RCB are led by the Indian skipper, Virat Kohli and the duo are two of the heavyweights of Indian cricket.

In this article, we will have a look at five of the most memorable matches between the two sides-

Chris Gayle was adjudged the player of the match

Mumbai Indians and Royal Challengers Bangalore played out a thriller at Chinnaswamy Stadium in IPL 2013. RCB managed to win the encounter by just two runs, and Chris Gayle was adjudged the player of the match. The hosts were put into bat, and managed to score just 156 runs in their 20 overs. Chris Gayle was the standout batsman, remaining unbeaten on 92 runs.

Mumbai Indians got off to a good start with Sachin Tendulkar and Ricky Ponting putting up a 50-run stand. However, the visitors could not keep with the required rate and eventually lost the match by a narrow margin of two runs. Vinay Kumar brought back RCB into the match, picking up three wickets.

Mumbai Indians won the toss and decided to bowl first. The visitors did quite well, restricting RCB to a score of just 142 runs in their 20 overs. However, Mumbai Indians got off to a worst possible start while chasing down the target. Sanuel Badree took a hattrick as MI found themselves reeling at 7 runs for the loss of four wickets.

However, Krunal Pandya and Kieron Pollard batted brilliantly to carry MI past the finishing line. The visitors won the match with four wickets remaining and seven balls to spare. Kieron Pollard was adjudged the player of the match for scoring 70 runs in just 47 balls.

It was a Virat-ABD special at Wankhede

There was no shortage of runs when the two sides clashed in Mumbai at the Wankhede Stadium. A total of 431 runs were scored during this encounter. RCB posted a total of 235 runs for the loss of just one wicket, after deciding to bat first. Fans were treated to a AB de Villiers special as he scored 133 runs in just 59 balls. Virat Kohli also played a crucial hand, scoring 82 runs in just 50 balls.

Mumbai Indians fought valiantly but eventually lost by 39 runs. Lendl Simmons top scored for the side with 68 runs. Kieron Pollard looked dangerous before he was dismissed for 49 runs. In the end, it was a comfortable victory for the visitors, but it was an entertaining battle.

Mumbai Indians posted 187 runs on the scoreboard and set a daunting target for Kohli’s men. Hardik Pandya’s late show, which included three maximums and two boundaries gave the visitors a foothold in the match. RCB were on course to chasing the target before Virat Kohli was dismissed by Jasprit Bumrah, with the score reading 116 for the loss of three wickets in 14 overs.

AB de Villiers played a splendid knock of 70 runs in just 41 balls, but that was not enough to guide RCB past the finishing line as they lost by just 6 runs. However, the match ended in a controversial manner, as the umpire failed to spot a no-ball on the last delivery of the innings, when Malinga overstepped the line. Virat Kohli was furious with this error, and lashed out at the umpiring.

The IPL 2020 clash between the two sides was one of the most entertaining clashes between the two sides. The match was decided by a super over, which went the way of RCB. Kohli’s men batted first, putting 201 runs on the board, with half-centuries from AB de Villiers, Paddikal and Finch.

RCB were heading towards a convincing victory as Mumbai were reeling at 78 for the loss of four wickets, at the end of 11 overs. However, it was Ishan Kishan’s valiant knock of 99 runs that brought back MI back into the match. Kieron Pollard also scored 60 runs in just 24 balls, and it was his last ball four that led to the super over.