Home SportsIPL IPL 2021: Should Finn Allen Be One Of RCB’s Four Overseas Picks?

IPL 2021: Should Finn Allen Be One Of RCB’s Four Overseas Picks? 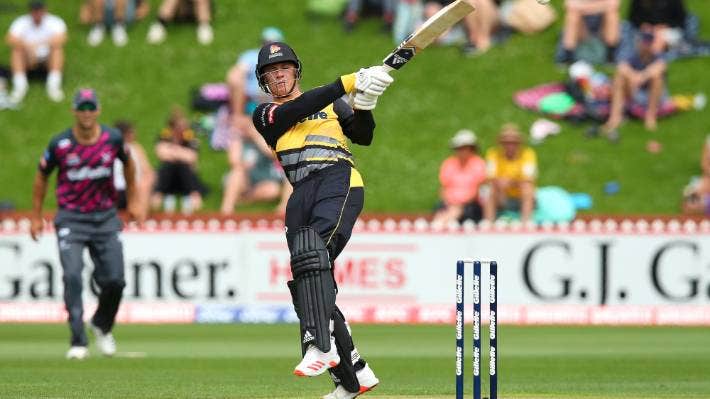 Finn Allen, the young New Zealand right-hand batsman, will be playing for Royal Challengers Bangalore (RCB) in the forthcoming edition of the Indian Premier League (IPL).

Allen, who had gone unsold at the IPL 2021 auction in Chennai, wasn’t initially part of the RCB squad but entered in as a replacement after Australia’s Josh Philippe opted out of the tournament due to personal reasons.

Allen had listed his base prize to INR 20 lakhs – identical to that of Philippe – but went through the entire auction without receiving any bid. RCB found a like-for-like replacement for Philippe in Allen, who can also bat and keep wickets.

“We had to select the next best option from the list of players registered for the IPL auction, at the same base price as Josh (20 lakh). We spent a great amount of time working through that potential list and have selected Finn Allen as a top-order batting replacement,” RCB had said in a statement at the time of the news about Philippe.

Allen, the 21-year-old batter from Auckland, had shifted base to Wellington before the recent domestic season. He had a great campaign with the bat in the Super Smash T20 league 2020-21. Allen topped the tournament run-charts with 512 runs at a strike-rate above 190 and played his part in Wellington Firebirds’ successful quest to the title.

Allen’s amazing form with the bat for Wellington brought him to the fringes of New Zealand’s T20I squad. He was brought in as cover for Martin Guptill during the recent series against Australia and made his debut versus Bangladesh in the first T20I in Hamilton on March 28.

After a nervy beginning, Allen finally played the knock that justified his early promotion to the top-level game as he blazed his willow for 71 runs off just 29 balls in the third and final T20I on Thursday (April 1) in Auckland.

Some brilliant hitting from Finn Allen💥#NZvBANpic.twitter.com/Zmme10BI1Z

Allen’s name hadn’t been doing the rounds among the front-runners to make the RCB playing XI in IPL 2021 until his exploits in Auckland but his stellar knock has brought him under consideration for many.

And so today, we explored whether Allen should be one of RCB’s initial four overseas picks and where should he bat in the order in IPL 2021.

Should Finn Allen Be One Of RCB’s Four Overseas Picks in IPL 2021?

Among overseas personnel for RCB, the great AB de Villiers is a lock, and one would think, being signed up for massive sums, pacer Kyle Jamieson and explosive batter Glenn Maxwell, will be definite starters as well. That leaves only one spot vacant for another player from abroad in an RCB playing XI.

Allen will be facing competition for that spot from the likes of Daniel Sams, Daniel Christian, Adam Zampa and Kane Richardson. The New Zealander could be the one to get the nod as a wicketkeeper-batsman if the RCB think-tank looks to reduce the workload of De Villiers, who had kept wickets in the last IPL.

During the IPL 2020 in UAE, RCB did recognise the need to ensure that De Villiers is fresh enough to produce his best with the bat by introducing Philippe to the line-up. However, the Australian couldn’t live up to the trust of the management as he made only 78 runs in his 5 innings at a strike-rate of 101.29. RCB tried to make Philippe work in different roles – whether it is at the top of the order or below – but never got the best out of him.

Allen, who has replaced Philippe in the RCB set-up, seems an upgrade on him as he has a T20 career strike-rate of 182.23 while averaging 42.61 from 15 matches. Having played most of his cricket in New Zealand, Allen’s biggest challenge will be to sustain his success on traditional Indian wickets this IPL. But where should he be placed in the RCB batting order?

It seems, to find a place in the RCB playing XI, Allen will have to adapt to a new role of a middle-order aggressor as captain Virat Kohli confirmed recently that he will be opening the innings himself in IPL 2021.

Kohli will be joining young Devdutt Padikkal at the top. Padikkal was one of RCB’s bright spots last season and made 473 runs from his 15 matches. Moving Padikkal down just to play Allen as an opener might be harsh on the youngster.

And so, Allen will have to bat somewhere in the middle-order where Maxwell and De Villiers are already set to bat. We found out recently that Maxwell’s best spot is No.3 if RCB are to get the best out of him. And therefore, with De Villiers an ideal fit at No.4, Allen might have to settle for a role at No.5 or No.6 in the line-up.

With RCB’s middle overs batting run rate a concern last season, Allen, who is capable of going berserk from ball one, might just be a x-factor player in the middle, especially if he can adapt to the surfaces.

In their statement, RCB mentioned how they are looking at Allen as “a top-order batting replacement” for Philippe. But with his explosiveness and the form he is carrying into IPL 2021, it would be tempting for RCB to adjust their plans and accommodate Allen in the middle-order.