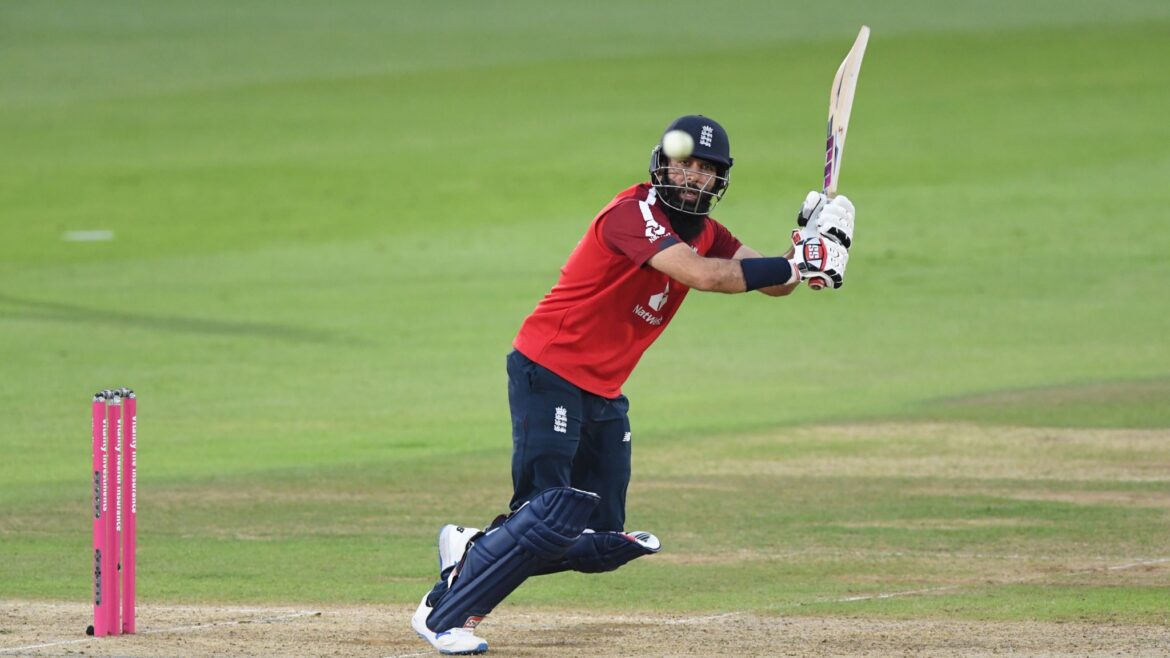 Moeen was roped into the CSK set-up after the franchise made a winning bid of INR 7.00 crores for him at the recent IPL 2021 auction in Chennai.

After spending more time on the bench than playing in the previous edition of the IPL in UAE, Moeen was released by Royal Challengers Bangalore (RCB), which provided an opening for CSK and the franchise pounced on it.

Moeen, may not be a regular in England’s T20I side, but at his best, could prove to be a valuable addition to the CSK set-up. His inclusion adds depth and variety to the Mahendra Singh Dhoni led side in both departments.

The elegant and attacking left-hand batsman has scored 309 runs at a strike-rate of 158.46 from his 19 IPL matches. As a bowler, Moeen has scalped 10 wickets while maintaining an economy rate of 7.13.

The Worcestershire cricketer has a batting strike-rate of 134.71 and an economy rate of 8.59 in his 34 T20I matches for England.

Moeen’s England numbers may have been affected by the inconsistency of games he has gotten at the international stage. But the stint with CSK might see the all-round cricketer get a run of games without being dropped, especially if he makes a good start to the campaign.

It is widely believed that Moeen should be one of CSK’s regular four overseas members, with the utility he provides and the options he throws up Dhoni’s sleeves.

And so today we explored how exactly CSK can get the best out of Moeen Ali, especially on the batting front.

Where should Moeen Ali bat for Chennai Super Kings (CSK) in IPL 2021?

In the last year’s edition of IPL, in UAE, CSK suffered their first-ever league-stage exit. The franchise won only six of their fourteen matches and ended seventh on the eight-team IPL 2020 points table.

CSK’s struggles were deeply analysed. The franchise couldn’t cover up most bases with an ageing squad, after an extended gap amid the pandemic in neutral conditions in UAE. CSK failed to maximise their 20 overs with the bat, while seldom managing to limit the damage as a bowling unit.

Moeen’s presence, then, provides them some relief as he can not only blaze his willow at different stages of an innings but can also contain the flow of runs with his bowling if used judiciously, in right match-ups.

Few would forget the hammering Kuldeep Yadav received at the hands of Moeen during an IPL 2019 match in Kolkata. That onslaught from Moeen showed how the left-hander can absolutely destroy an opposition spinner’s confidence on his day. Moeen is a better player of spin than pace, something which has been quite evident in the way he has always batted.

He loves the ball near the arc against spin, which the pacers deny him. They instead hit the hard lengths which he has always found tough to negotiate. His problems against bouncers at express pace is well documented.

Dhoni is a master of identifying his team’s strengths and weaknesses, and using the right man for the right job. The Indian captain should use Moeen in the middle-order where teams generally employ their spinners to try and control the game. Moeen can be handy in putting the opposition plans in jeopardy as an aggressor through overs 7-15.

Last year, when even Dhoni looked out of touch, teams put the breakers on CSK’s run-making by using more and more overs of spin to them in the IPL. The team carried little to no momentum going into the death-overs where, again, they couldn’t put most of the opponents under pressure.

Moeen’s inclusion in the middle-order will, therefore, also help other batters around him and ultimately allow CSK to get the desired totals on the board.

Not playing a single game at their preferred venue at Chepauk, CSK will be required to show extra resolve and depth in all departments through the IPL 2021. And thus, Moeen is a timely addition to the three-time champions.

Also Read: How Important Will Shakib Al Hasan Be To KKR’s Plans?