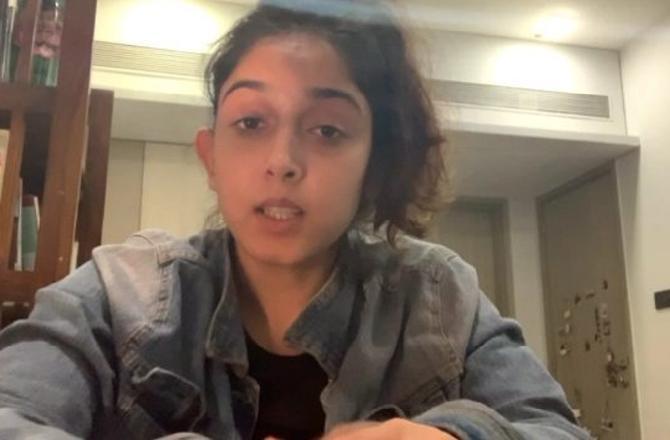 Aamir Khan’s daughter Ira Khan grabbed headlines a week ago when she opened up on her tryst with clinical depression. She took to her Instagram account and shared a video where she talked about how she has been suffering from depression for the last four years, visiting a doctor, and doing much better now. She also revealed that she was sexually abused when she was a kid.

Now, she has put another video on her Instagram handle talking about her depression days. In the video, she is seen talking about the different advice people gave her when she was clinically depressed. She shared that she went to at least four doctors for the treatment and went on to say how she also consulted her parents and ‘Kiran aunty’, referring to Aamir’s wife, Kiran Rao. They advised her to ‘stop being busy, stop jumping from one thing to the next… Just be… Just slow down’.

She said in the video that many people ask those who are suffering from depression to “keep busy, work out and think positive.” She further added, “I used to work out a lot, but now I’m scared of working out, which is frustrating, because I loved working out a lot”.

“What can you say to someone who’s depressed as way of advice when you don’t really know how their depression is effecting them? What should you say? What should you not say? (sic)”, she captioned the picture.

Last week, she had talked about her experience with depression. Khan also opened up about being sexually abused when she was 14 years old. In a video posted on Instagram, Aamir Khan’s daughter said, “When I was 14, I was sexually harassed. That was slightly an odd situation as I didn’t know what that person was doing and if they knew what they were doing. It wasn’t happening every day. So it took me a year to be sure that they knew what they are doing and that is what they are doing.”

“I never spoke to anyone about anything because I assumed that my privilege meant I should handle my stuff on my own, or if there was something bigger, it would make people need a better answer than ‘I don’t know’. It made me feel like I needed a better answer and until I had that answer, my feelings weren’t something I should bother anyone else with. No problem was big enough to ponder too long about,” she continued.

Last month, the star daughter revealed that she was diagnosed with clinical depression. While talking about the factors that could have possibly contributed to it, she said, “My parents’ divorce had no role to play in traumatising me. They are still friends and perfect parents. So that can’t be the reason,” she added.

Khan’s Instagram account is filled with lovely images of her and her candid moods. From sharing her tattoos to her abode, she has shared almost everything with her fans. She’s also pursuing acting and will be soon seen in a project with Gulshan Devaiah and Vijay Varma.