Home EntertainmentBollywood Irrfan Khan chilling with this pug on sets of Blackmail is all things lovely: Son Babil shares a sweet throwback of ‘Bassu and Baba’

Irrfan Khan chilling with this pug on sets of Blackmail is all things lovely: Son Babil shares a sweet throwback of ‘Bassu and Baba’ 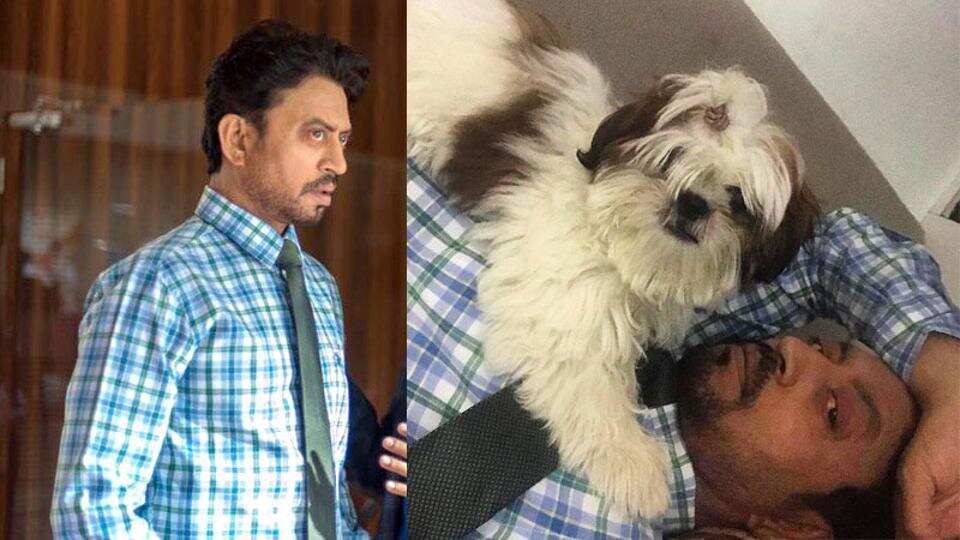 Actor Irrfan is no more but he continues to be remembered for his work. The actor had featured in 2018 film Blackmail before going on a two-year sabbatical after being diagnosed with neuroendocrine tumour. His son Babil has now shared a behind the scene picture of the actor from the sets of Blackmail.

Sharing the picture on Instagram, Babil wrote, “A sweet one for his fans. Bassu (@mann012 ‘s puppy) and Baba, Blackmail, 2017.” The picture shows Irrfan taking a break in his costume — a formal shirt and a tie. He is seen with an adorable pup sitting on his chest.

In the film, Irrfan plays a middle-class man who blackmails his wife after catching her with her lover. The film starred Kirti Kulhari as his wife, Arunoday Singh as her lover and Divya Dutta as the wife of his wife’s lover. The black comedy was directed by Abhinay Deo of Delhi Belly fame.

Irrfan had flown to London for treatment and was missing from the film’s promotional activities though he had extended his support for the same. He had asked the makers to release the film on schedule. Sharing how Irrfan went out of his way for the benefit of the film, Abhinay had told Hindustan Times ahead of the release, “What he’s doing is absolutely inspirational and amazing. He not only opened up in detail about what he’s going through at this point of time, but also [talked about] how he’s dealing with his illness. This clearly highlights his positivity and strength. And in my opinion, it’s a winner’s attitude, something that we should learn from him. Irrfan is showing us how to deal with such [unavoidable] circumstances in life.”

Also read: Pregnant Anushka Sharma shares funny post about losing flexibility, but not her appetite: ‘I can’t sit like this but I can EAT’

Talking about why Irrfan was the apt choice for the character of Dev, he had said, “Irrfan’s character (Dev) in Blackmail has the least number of lines — we needed someone who could deliver even with few words and [through his] expression, but at the same time wouldn’t go overboard. There are very few actors in the country who can pull off such a layered performance. Irrfan lets the character blend with himself, and you don’t know where Irrfan ended and Dev started.”

Irrfan died this year on April 29. He is survived by wife Sutapa Sikdar and sons Babil and Ayaan.