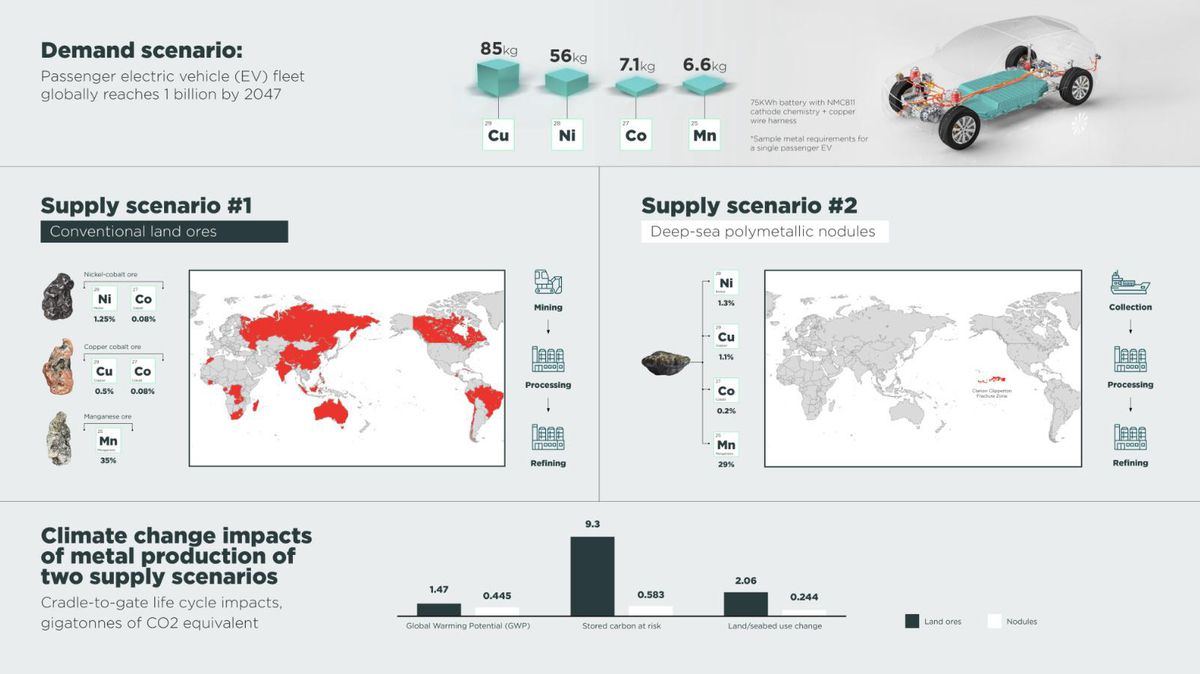 It certainly looks like it. From almost any perspective, seabed mining of metals is better for the environment, social justice issues and economics.

A large continuous supply of special economic metals is essential for any high tech future. Building electric vehicles and wind turbines take a lot of resources, more than we can provide now, particularly special metals like Co, Li, Te and Nd, as well as just base metals like Fe, Cu, Pb and Zn and other materials like graphite.

But their supply is generally an environmental and social nightmare. The waste from Li, graphite and high-purity-Si processing has destroyed whole villages in ecosystems in China, Indonesia and Bolivia, among others. America is still dealing with the acid mine drainage left from 120 years of mining. And like blood diamonds, half of the Co supplies come from inhumane child labor practices.

The reason this is so important is that many of the people who support the new energy technological revolution of non-fossil fuels and renewables, electric vehicles, conservation and efficiency, also care about the social issues that many of these technologies incorporate in their wake – corruption, environmental pollution, extreme poverty and child labor.

Not the image sought by people at the shade-grown coffee shop surfing the internet for free-range eggs on their iPhones.

Just the carbon intensity alone of producing these metals has led to growing interest in low-carbon metal sources. Last year, Elon Musk promised “a giant contract” for nickel mined “efficiently and in an environmentally sensitive way.” And it has already sparked some significant changes.

So new metal sources should consider their life-cycle carbon footprint, environmental pollution and social justice effects. Everyone agrees that recycling what metals we have is the best thing to do, but we’ll need dozens of times the amount of critical metals we have now, even if we recycle 100%.

We need 3 billion fully electric vehicles worldwide and 10 trillion kWh/yr more by 2040 to have any chance of achieving our climate goals. Recycling and conservation of metals won’t make a dent in this.

Geologists have long known that the ocean floor is chock full of metals – Cu, Ni, Ag, Au, Pt and even diamonds. Manganese nodules are polymetallic rock concretions that lie loosely on the sea floor or buried shallowly in the sediment (see figure above).

These nodules occur in most oceans, even in some lakes, and are abundant on the abyssal plains of the deep ocean between 4,000 and 6,000 meters (13,000 and 20,000 ft). The nodules can be harvested from the sea floor bottom easily.

The Clarion-Clipperton Zone is the largest of the most economic zones, about the size of Europe, extending from the west coast of Mexico to Hawaii. The total mass of manganese nodules here is over 21 billion tons. Other important areas include the Peru Basin, the Penrhyn Basin near the Cook Islands, and the central Indian Ocean.

These areas are overseen by the United Nations International Seabed Authority (ISA).

Unlike metal ores on land which rarely have metal yields above 20%, and are often less than 2%, these seabed nodules are 99% usable minerals – 33% metal and the rest useful in products like construction aggregate and fertilizer since there are no toxic levels of heavy elements like mercury or arsenic.

So there’s no toxic tailings or mining waste like on land, no deforestation, no open pits, no contaminated rivers or aquifers, and no tailings impoundments

A recent study by Paulikas et al. (2020) compares land and ocean mining from several viewpoints and some of the results are summarized in the table above. Other peer-reviewed studies show similar results.

Pretty much just the habitat effects. The mining, pumping and cleaning of the manganese nodules can create sediments, noise and vibrations.

So the big question, and the final decision, is – are the advantages in carbon, pollution and social justice more important than the ecosystem damage to the ocean floor? And can we minimize that ecosystem damage?

DeepGreen is a Canadian company working in an ISA-granted portion of the Clarion-Clipperton Zone. They are currently carrying out a multi-year environmental impact assessment to fully understand and to mitigate against potential harm to the environment. There are a few key elements about the area, and the process, that are important.

The Clarion Clipperton Zone is one of the least productive areas of the ocean, with one of the lowest biomass environments on the planet, very like deserts on land. The Abyssal CCZ is home to 300 times less biomass than in an average biome on land, and up to 3000 times less compared to rainforest regions where a lot of mining takes place. There are no plants, 70% of life exists as bacteria, and most organisms are smaller than 4cm (see figure above).

DeepGreen’s operations will be monitored in real time and shared with regulators and the public. They will avoid ecologically-sensitive areas. They will monitor currents and slow down collection to limit transport of sediment outside of our operating area. Noise levels are less than those from normal marine industrial and military operations, and they will not operate during migratory periods, or coincide with any breeding or feeding grounds.

As to sediment released into the water column, experimental work conducted by MIT, Scripps and DeepGreen show extremely high dilution of sediment concentration per liter within moments of discharge. And experimental work shows that 20 concurrent operations collecting 3Mpta (wet) of nodules would be required for particle concentrations to rise above background levels measured in the CCZ.

In addition, if all particles introduced into the water column by these operations rapidly sink to the seafloor CCZ area, the resulting fallout would be 0.02 micrograms per year—just 2% of the observed normal sedimentation rate in the CCZ of 1 microgram per year.

Based on 11 seafloor disturbance and commercial mining studies, ecological recovery rates for nodule collection are much lower than those for mining on land – decades versus millenia.

The ISA has set aside more areas for protection (1.44million km2) than is currently under exploration (1.1 million km2) and contractors will set side further areas and leave behind 15% of nodules to further aid recovery.

Finally, research being conducted will determine where it is best to return the process water. It looks to be around 1,500 meters, well below the euphotic zone, where there is unlikely to be any significant impact on organisms in the water column and where the temperature difference between that water and the water on the ocean floor won’t cause significant effects.

All told, these processes are unlikely to cause the widespread die-offs so feared by many, including myself.

Unlike other potential operations, DeepGreen’s collector will only disturb the top 5cm of the seafloor, and will direct a flow of water in parallel with the seafloor to uplift the nodules without actually touching them.

This is not to say the operation will be perfect, but it will be much, much less impactive than any land operations, and is the most optimal method for getting these critical metals between now and 2050.

Then hopefully, we will be recycling enough that any mining needed beyond that time will be minimal.

Is Mining The Ocean Bottom For Metals Really Better Than Mining On Land?