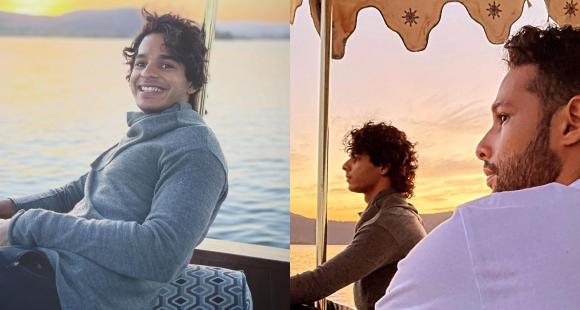 In the photos, Ishaan and Siddhant can be seen sitting inside a boat and soaking in the warm sunshine. Check out the photos below.

Ishaan Khatter and Siddhant Chaturvedi are living it up in Udaipur as they are shooting for the next schedule of Phone Bhoot. The duo have been taking social media by storm with their antics and scenic photos as they train, shoot and goof around in the city of lakes. On Thursday, Ishaan took to social media to share another set of scenic photos and it truly was breathtaking.

In the photos, Ishaan and Siddhant can be seen sitting inside a boat and soaking in the warm sunshine. Sharing a series of photos, Ishaan not only gave a glimpse of the stunning scenery but also shared a photo of his co-star. In true Phone Bhoot style, Ishaan captioned his post with a ghost emoji.

Just yesterday, the actors also invited Katrina Kaif to come workout with them as they shared a super goofy video as they were seen training in their hotel premises right next to a lake.

Check out the hilarious video below:

Last year in July, the trio shared their first look for Phone Bhoot. Their fresh pairing created a lot of buzz on social media. Are you looking forward to see Ishaan, Siddhant and Katrina together on the big screen? Let us know in the comments below.

ALSO READ: KL Rahul has eyes filled with love for rumoured girlfriend Athiya Shetty as she stuns in a stylish photoshoot