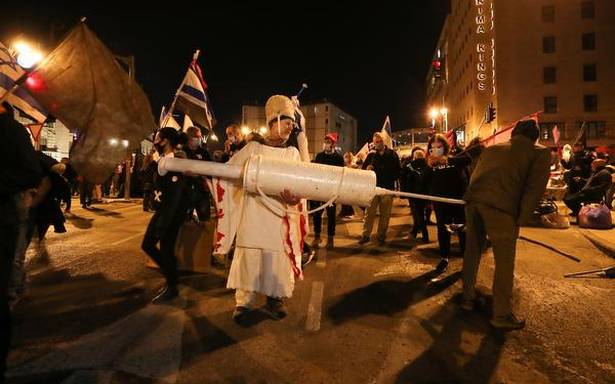 Thousands of Israelis renewed weekly demonstrations against Prime Minister Benjamin Netanyahu, calling for the long-serving leader to resign over corruption charges against him and his alleged mishandling of the coronavirus crisis.

People take part in a protest against Israeli Prime Minister Benjamin Netanyahu’s alleged corruption and his handling of the coronavirus disease (COVID-19) crisis, in Jerusalem on January 9, 2021.
| Photo Credit:
Reuters

The protest in a Jerusalem square near Mr. Netanyahu’s official residence on January 9 comes as Israel is the midst of its third national lockdown, which was recently tightened to shutter schools, and as the country presses forward with a world-leading vaccination drive. Mr. Netanyahu’s trial was set to resume this week, but was postponed indefinitely amid the tighter restrictions.

Mr. Netanyahu has been indicted on charges of bribery, fraud and breach of trust connected to three long-running investigations. He has denied any wrongdoing and says he is the victim of a “witch hunt” by hostile media, law enforcement and judicial officials. Protesters argue that Mr. Netanyahu cannot properly lead the country while under indictment.

Israel has seen a recent surge in cases despite unleashing one of the worlds fastest vaccination campaigns. The country has given the first of two vaccine doses to nearly 20% of its population, and Mr. Netanyahu said on Thursday that Israel has secured enough vaccines to inoculate the whole adult population by the end of March.

Mr. Netanyahu has placed the vaccination drive at the centre of his campaign for re-election that same month. On March 23, Israel will hold its fourth nationwide vote in less than two years. In the meantime, he has called on Israelis to make “one last big effort” to halt transmission by adhering to the tightened restrictions.