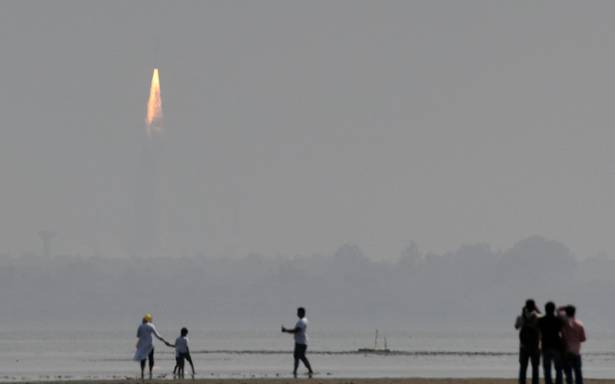 The satellites were carried on board the PSLV-C51, the 53rd flight of India’s workhorse launch vehicle and the first dedicated mission for New Space India Ltd (NSIL), the commercial arm of ISRO. The mission was undertaken under a commercial arrangement with Spaceflight Inc., USA.

The PSLV-C51, equipped with two solid strap-on boosters, the third such launch of the PSLV-DL variant, lifted off at 10.24 a.m. from the first launch pad at Sriharikota.

Of the 13 satellites from the U.S., one was a technology demonstration satellite and the remaining for 2-way communications and data relay. Among the five Indian satellites, one belongs to DRDO.

Five satellites belong to India including the Satish Dhawan SAT (SDSAT) built by Space Kidz India, a nano-satellite intended to study the radiation levels, space weather and demonstrate long range communication technologies, and the UNITYsat, a combination of three satellites intended for providing radio relay services. The other satellite belongs to DRDO.

The SDSAT developed by SpaceKids India has an engraving of Prime Minister Narendra Modi on the top panel of the satellite to show solidarity and gratitude for the atmanirbhar initiative and space privatisation, SpaceKidz said. The Bhagavad Gita was also sent on-board an SD card to give the scripture, which teaches oneness as the highest form of humanity, the highest honour, it said.

Roughly 16 minutes after lift-off, the PS-4 engine was cut-off and the Amazonia-1, weighing 637 kg, belonging to the Brazilian National Institute for Space Research (INPE), was separated a minute later. The satellite will further strengthen the existing structure by providing remote sensing data to users for monitoring deforestation in the Amazon region and for analysis of diversified agriculture across the Brazilian territory, according to ISRO. The Amazonia-1 was injected into its precise orbit of 758 km in a sun-synchronous polar orbit.

“This moment represents the top of all this effort made by so many people in our National Institute for Space Research and our Space agency. This is a very important mission for Brazil and it represents a new era for Brazilian industry for satellites. This is one positive step of our partnership that is going to grow. Congratulations on a beautiful launch. We are going to work together and this is the beginning of our partnership,” Brazil’s Minister of Science, Technology and Innovation Marcos Cesar Pontes said.

Following that, the other 18 customer satellites were placed into their intended orbits. The entire operation of the mission took about 1 hour and 55 minutes to completion.

“This particular mission is special because these five Indian satellites are coming under the new space reform announced by the Government of India. These institutes have done an excellent job. ISRO has promoted, handheld and all along helped them to build these satellites technically correctly to launch them,” ISRO Chairman, K. Sivan said.

He said ISRO has 14 missions planned this year, including the first unmanned mission around the end of the year.

How neutrinos aid in the death of massive stars

Why Climate Helped Tampa Bay Become The First Team To Play A...

Didn’t Expect To See THIS Rare Shark In Peru