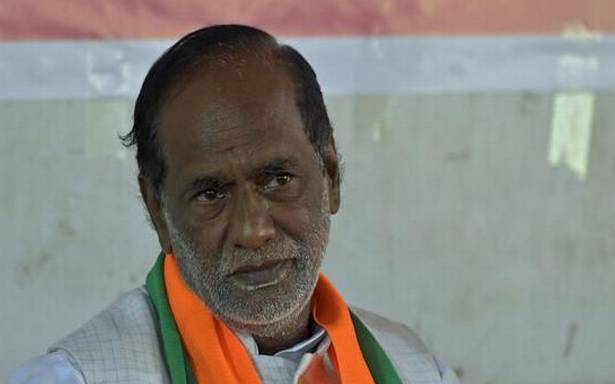 At a press conference on Thursday in the party office, the former party chief recalled that KCR had never let the Opposition or any organisation even hold a protest meeting in the last six years but had used the entire official machinery to enforce the bandh. “Why did he not utter a single word expressing solidarity with the protesting farmers in Delhi? People have now understood his duplicitous nature,” he remarked.

If KCR is so concerned about the farmers welfare, he should first fulfil the election-eve promises of providing free fertilisers, loan waiver, removal of market cess, pay bonus for those growing fine rice variety to benefit the farmers of Telangana, he said.

Comparing the new Farm Acts with the economic reforms ushered in by Prime Minister P.V. Narasimha Rao, Mr. Laxman said even then several forces including those within the Congress Party, Left parties and other organisations strongly opposed and tried to false propaganda to the people about loss of livelihoods and anarchy when the reality was that it has led to the country becoming a major economic powerhouse.

“Prime Minister Narendra Modi similarly took a historic and bold decision to bring out the Farm Acts to give freedom to the farmers from the middlemen. The Bills were thoroughly discussed in Parliament before being passed. Some misguided farmers and those under the control of the brokers running the market yards of Punjab and Haryana are agitating but the Government is trying to convince them. No where else are farmers agitating,” he maintained.

The new Acts will not only benefit the farmers by removing monopolies and restrict middlemen but also ensure consumers get food at an affordable price. “The Modi government wants the farmers to get the right price and not do distress sales together with forced to pay market cess. These reforms were forgotten by the Congress Party though it has indicated in its manifesto,” he added.

In a separate meeting at Nizamabad, former MP and senior leader Vivek Venkatswamy claimed that the Central government was ready to buy the entire agriculture produce without causing any loss to the farmers and accused the Opposition parties of playing a political game in supporting the new Farm Acts but backtracking now.

“The Modi government has given ₹8 lakh crore in minimum support price in the last six years and the Centre is giving ₹6,000 as subsidy to every acre across the country. The new Farm laws are only meant to free them from brokers. Even TS farmers can sell the fine variety paddy anywhere since the KCR government has cheated them by not giving any support price or bonus,” he said.