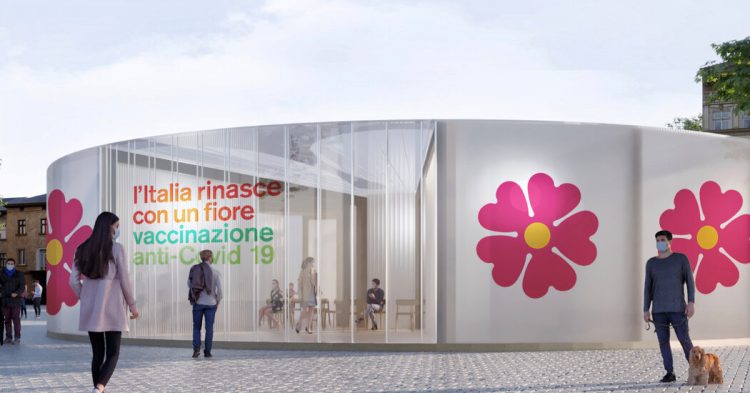 ROME — This has been an ugly year for Italy.

The first wave of the coronavirus took the country by surprise and killed tens of thousands. The second wave somehow took the government by surprise and has killed thousands more. And Italians, desperate for the arrival of the vaccine next month, have struggled to get their hands on simple flu shots or to understand if they will have to be home — and stay home — for Christmas.

To brighten things up as Italians await the vaccine, the government has turned to the urban planner and architect Stefano Boeri. Best known for making so-called vertical forests out of Milan skyscrapers, Mr. Boeri has sought to help his country with architectural flower power — designing 1,500 pavilions with a primrose theme where the vaccine will be distributed.

“The primrose is the first flower after the winter, it’s something even a child knows,” Mr. Boeri said in an interview, calling his vision for the building design “a strong message that everyone can understand.”

Italy has run with the proposal, making its official Italian slogan for vaccination, “With a flower, Italy comes back to life.”

So have the critics, a plethora of whom found the government’s emphasis on Milanese design a little misplaced in a pandemic.

But Mr. Boeri rejects the cynicism. “Flowers are serious,” he wrote on Twitter, and in the interview he explained why the primrose was the ideal image for Italy’s vaccination program, which kicked off Sunday.

“It’s one thing to go get vaccinated in a container or in a military field hospital and it’s another to go into a luminous space in the form of a flower,” he said.

The project took root about three weeks ago, when Mr. Boeri received a call from Domenico Arcuri, Rome’s special commissioner for the coronavirus emergency. Mr. Arcuri explained, he said, that although hospitals and empty gyms would be the main vaccination points, there would also be a need for external, temporary pavilions to be created. The program to vaccinate at least 40 million Italians to reach herd immunity would last for at least a year and a half.

Like many in northern Italy, he has lost close friends and family to the coronavirus. He said that while the pandemic cast a pall over the year and the country, that made the flashes of generosity and kindness, professionalism and sacrifice shine even brighter.

“The demonstrations of generosity were beautiful,” said Mr. Boeri, adding that Italy’s vibrant volunteer sector “at times substituted the lacunae of the state.” It was in that spirit that he and his team, which took no compensation, labored. “It was the least we could do.”

He and Mr. Arcuri agreed that they needed a single, coherent image to spread the word and inspire people to roll up their sleeve.

Mr. Boeri said he and his team worked furiously over two weeks to come up with something. They sought an image, he said, that could be universally understood as positive “by a 4-year-old or an intellectual in the north or a young migrant.”

He said they excluded antagonistic images that could “promote anxiety,” like a simple graphic of a bar crossing out the spiky virus, but were also careful not to promote the notion that a vaccine would set you free. So they nixed proposals like an image of two young people wrapped in an embrace, or of a mask flying away into the uninfected ether.

When the flower idea emerged, it immediately resonated.

“We began to think that the message had to be so direct that even the pavilions should resemble flowers,” Mr. Boeri said.

The next question became which flower to choose, a complicated decision in a country where flowers are often identified with political parties.

“We entered in a madness about the relationship between politics and botany,” he said.

Mr. Boeri first thought of a daisy, but then he and his team recalled that it was affiliated with a now defunct center-left party. They dismissed an Alpine flower, which is the symbol of the nationalist League. They flirted with the idea of the yellow sunflower, but it seemed too close to the bright yellow stars of Italy’s populist Five Star Movement.

But once the primrose entered the picture, it struck them as a no-brainer.

Mr. Boeri presented the plan to Prime Minister Giuseppe Conte and the country’s powerful health minister, Roberto Speranza. They expressed their pleasure with the “positivity of the message” and thanked him for his work, he said. But since the primrose comes in many different hues, “we discussed a little bit on the color.”

Mr. Conte liked the fuchsia chosen by Mr. Boeri, but also thought yellow would be nice, the architect said. Fuchsia was the final choice.

The government will now open bids for construction companies and publicity firms, which could make alterations. But as it stands now, the pavilions are to be built from wood and biodegradable fabric, and have airflow, waiting rooms and light. They are to be inviting hubs of inoculation.

The promotional video for the project shows flowers blooming in thousands of piazzas across the peninsula. Models of the round white pavilions, stamped from above with fuchsia flowers were imagined in the Piazza del Popolo in Rome, the Piazza del Duomo in Milan and in Trieste and Naples and elsewhere. The designs looked as if Scooby-Doo had taken a spin through Italy in a giant Mystery Machine van, losing tires along the way.

Mr. Boeri said smaller towns would have flower-branded gazebos. In any case, the primrose would mark the spot where vaccines could be found. Some have even proposed that the vaccinated should wear primrose pins to identify themselves.

“The primrose is the symbol of the vaccination,” Mr. Boeri said. “Wherever you get vaccinated, there will be a primrose.”