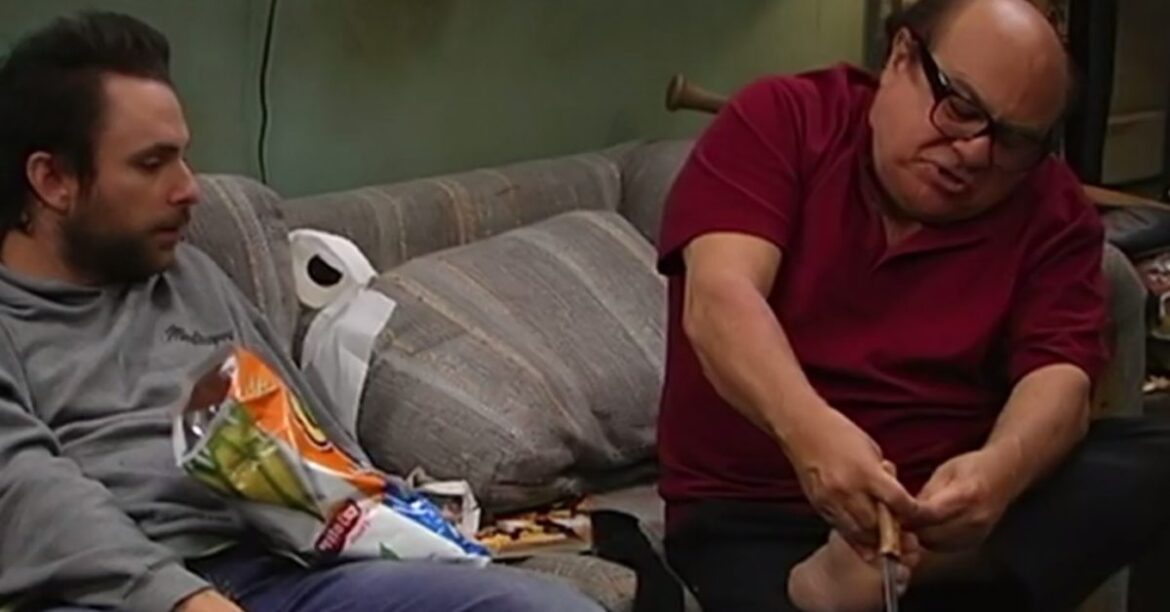 Just when we thought FXX’s It’s Always Sunny in Philadelphia stars Kaitlin Olson and Rob McElhenney appearing and performing in an Imagine Dragons video would take the prize this week for “Most Random ‘Always Sunny’ Update,” leave it to Danny DeVito aka Frank Reynolds to come in at the last minute to climb the ladder and take the belt. And he did it with… Troll Foot. In case you didn’t know, Troll Foot is basically DeVito’s love affair with the folks on social media via the sharing of images of his foot (aka “Troll Foot”) for a little over a decade. And that Troll Foot gets around- from Germany and NYC to SDCC and an NBA game. Over the past several years, DeVito has dialed back the posts- revealing in an interview recently that “I haven’t been inspired that much in the past year to tweet Troll Foot.” Thankfully, that changed on Saturday- and with the new look at Troll Foot came the thanks of a grateful nation and the warm embrace of the world.

Here’s a look at DeVito’s post celebrated the best thing about the vernal equinox: more daylight to truly love and appreciate Troll Foot. The best present you could get it? A newly-sharpened toe knife:

While promoting the third season of A.P. Bio in the UK (with the fourth season currently in production for Peacock), Glenn Howerton explained to The Guardian how the series works to show the characters’ flaws in a manner that shows them as they truly are, allowing the characters to be a target for satire because of them. “Certainly we’ve become a little bit more careful to make it clear that, while the characters can be misogynistic and racist and horrible, we the writers are not racist, misogynistic, and horrible people. If we were to do some of those episodes for the first time now, people would be like: ‘Well, wait a minute, who are these people?’ But people now know who we are, and they know that our intentions are actually to skewer this sort of behavior, not to celebrate it.”

Bleeding Cool had the opportunity to ask Howerton about the upcoming 15th season of It’s Always Sunny in Philadelphia during our one-on-one interview ahead of A.P. Bio Season 3 here stateside late last year. In the clip below, Howerton explains that the combination of pandemic-related delays and other projects that the cast is committed to (for example, the second season of McElhenney’s Mythic Quest, Olson’s upcoming Jean Smart-starring comedy, and the fourth season of A.P. Bio) has made it difficult to finalize a production (“at this point, it’s more of a timing thing”). Though they may still be in the process of “trying to figure it out,” Howerton expressed how excited and committed they are to a strong 15th run (saying “maybe even a sixteenth” at the time).

Heading into last summer, McElhenney revealed that writing was underway, though production timelines were in flux due to production shutdowns caused by the COVID-19 pandemic. McElhenney was hopeful that they’ll be able to “jump right into something new with ‘Sunny'” soon. And he also made one thing clear: as long as the fans want it (and FX Networks wants to keep paying for it, which we now know they clearly do) then Paddy’s will be keeping its doors open for some time to come. “How many years do I have on this planet? I’ll do it forever. If people keep watching it and we keep having fun, why would we ever stop? It’s my dream job. I never understand why people leave shows. I don’t. I never understand that,” McElhenney explained. “The show is what I dreamed of doing my entire life. I don’t take it for granted. And if they keep paying me and the audience keeps watching it and I still love it… why would I ever stop?”

Court of Arbitration for Sport to hear Sun Yang’s doping case on 24-28 May...

Tenet To Inception, Christopher Nolan Movies Which You Can Enjoy On Amazon Prime Video